Oculus is already aware that using VR can cause problems with hand-eye coordination, and it warns Oculus Rift users about potentially dangerous symptoms of VR use.

“Do not drive, operate machinery, or engage in other visually or physically demanding activities that have potentially serious consequences — or other activities that require unimpaired balance and hand-eye coordination — until you have fully recovered from any symptoms,” reads the health and safety warning. 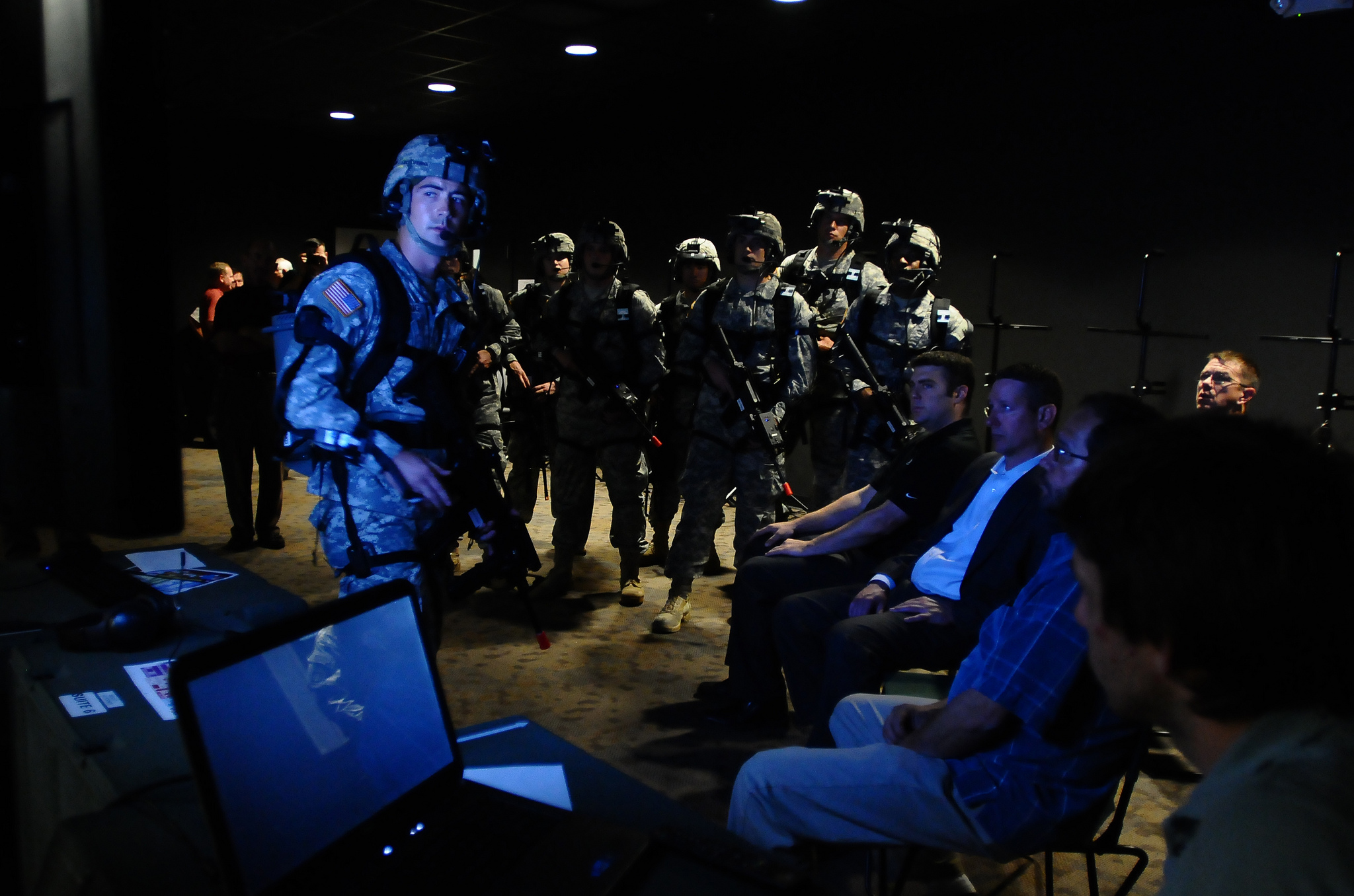 Above: Soldiers at Fort Bragg before entering a simulated battlefield environment.

“If you’re in a simulation, your brain adapts to the constraints of that simulation,” explained Rizzo. “If you do if for a long time, immediately you get out of the simulation, for a brief period of time, your brain has to re-adapt. If you reach for something you may reach past it because VR may affect your perception of objects at a distance.”

Past-pointing can significantly affect you ability to carry out everyday tasks. Rizzo explained that he always takes care with participants in his VR studies, even arranging cab rides for participants, rather than letting them drive home.

People using VR headsets at home won’t have anyone looking over their shoulder and watching out for them. There won’t be anyone to stop them jumping in the car and driving down the highway after a long gaming session, and that’s something they really shouldn’t be doing.

Despite the potential dangers, though, Rizzo says that the disorienting effects of VR are only short term.

Interestingly, Oculus particularly advises against children aged 13 and over using the system for prolonged periods of time, saying it could “negatively impact hand-eye coordination, balance, and multi-tasking ability.”

Rizzo is pretty sure why this additional warning is in place, though. “I certainly think they’re covering themselves,” he told me over the phone, “as any companies making these devices would be smart to do.” 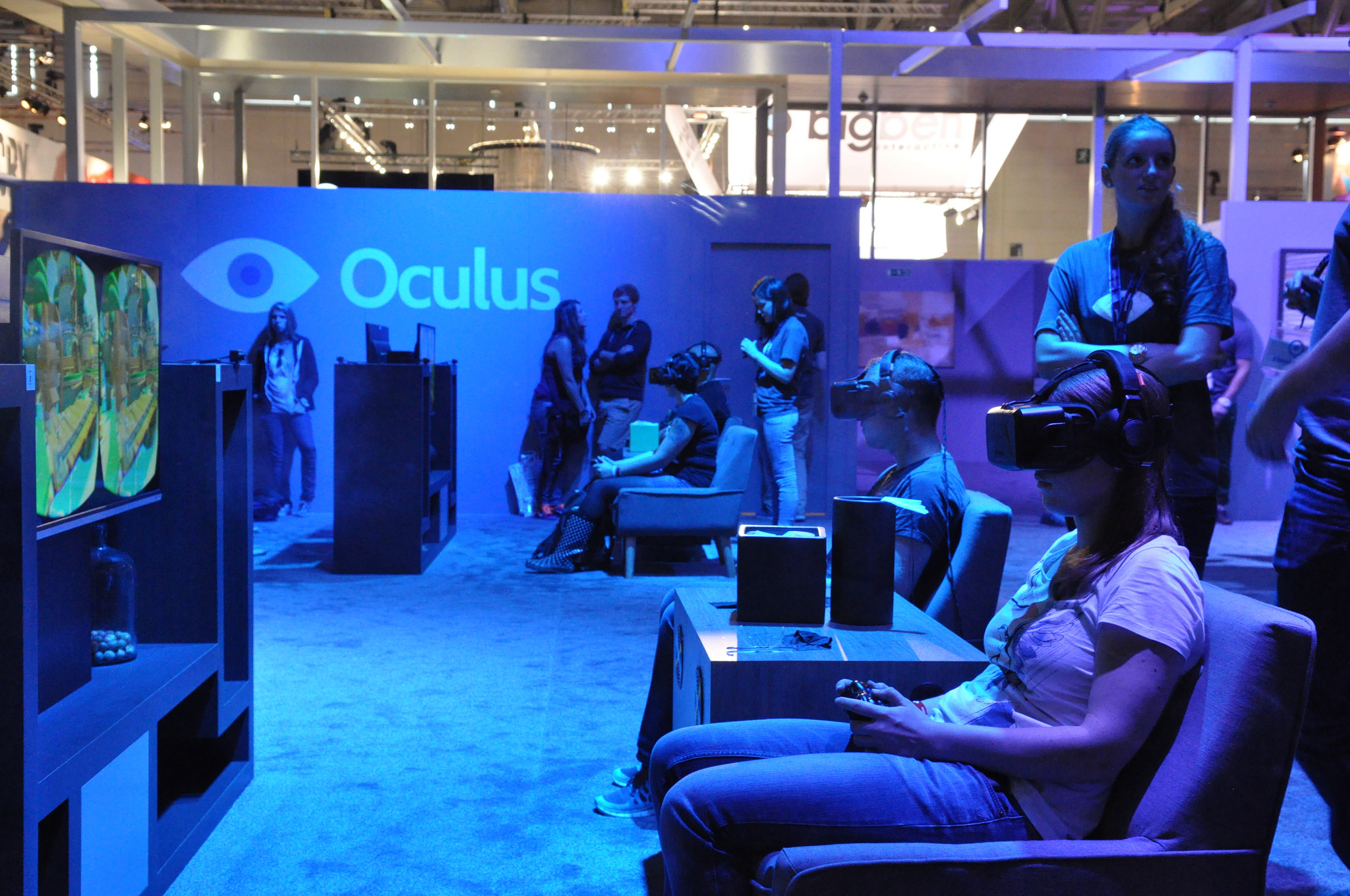 Oculus Rift’s health and safety warnings explicitly state that kids under 13 shouldn’t use the VR system.

It’s likely linked to fears of stereoscopic images harming children’s still-developing eyesight. They’re the same fears that arose when Nintendo’s 3DS handheld debuted in 2011, and they won’t go away.

Dr. Tom Piantanida wrote a review of HMD safety back in 1993 and suggested that VR headsets could trigger latent visual problems in people with intermittent exotropia — a condition quite common in young children where one eye sometimes turns outward.

Piantanida argued that HMDs and other stresses can trigger episodes of double vision in these children, which can then lead to permanent visual changes.

“The visual system attempts to overcome the inconvenience of double vision by suppressing one of the images,” said Piantanida. “This suppression, if it occurs in very young children and if it is sustained, can lead to permanent visual changes of the type commonly called amblyopia or ‘lazy eye.’ Thus, in a small number of very young children, HMDs … have the potential for triggering latent visual anomalies that can produce permanent visual changes.” 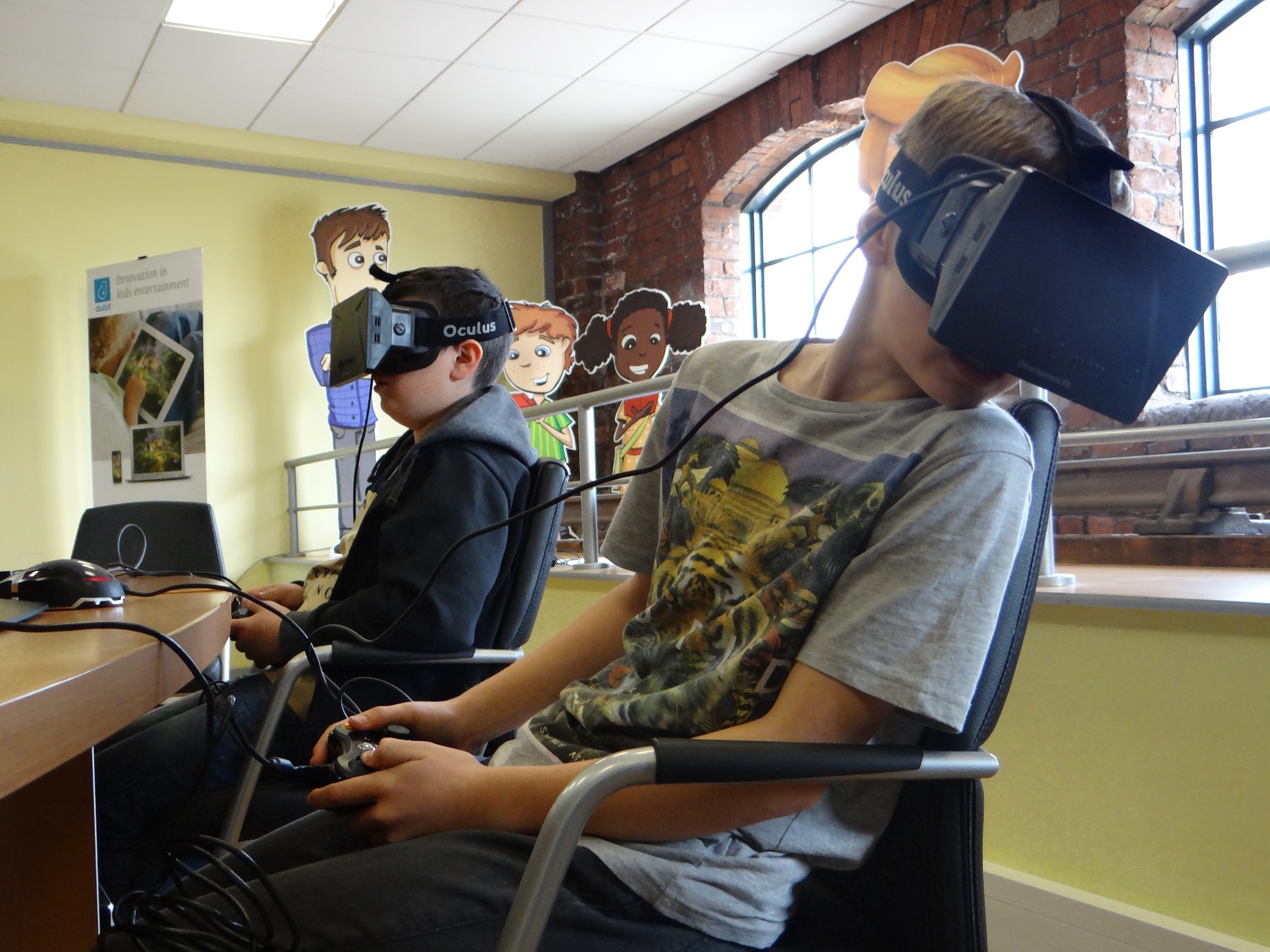 Above: Kids testing out the Oculus Rift.

Marty Banks remains sceptical about this risk, but he says we still need to take care.

“That would be a smoking gun,” he said. “I haven’t seen such effects myself. I’ve spent years looking at stereoscopic images, and many of my students have spent hour upon hour and none of us have had any effects like that. But kids are different; they’re tough to collect data on.”

“We don’t have a large database of children that we’ve looked at and seen what effects there are,” said Banks. “You’re a little less certain saying there’s no problem with kids. But I haven’t seen anything that stands up yet.”

Professor Peter Howarth, an optometrist and expert on stereoscopic displays based at Lougborough University in the U.K., doesn’t believe that there’s a significant risk with stereoscopic images and kids. In fact, he’s pretty sure that stereoscopic images  — if presented correctly — are actually helpful to children suffering with intermittent exotropia, by forcing them to use both eyes together.

“The concern seems to be that there is a ‘one-in-a-million’ chance of there being an adverse reaction,” he said, talking about the Nintendo 3DS back in 2011, “and the counter-argument is that there is a far greater probability of the use of the 3DS being beneficial. The logical conclusion to all of this is that, far from warning people about the danger of children using the 3D system I have just bought my daughter, Nintendo could argue that the playing of the games could be of benefit to children!”

I contacted Howarth to ask if he was as confident about potential problems with the stereoscopic displays in VR headsets, especially given Oculus’ clear warning about under-13s.

“My confidence comes from the fact that orthoptists treat muscle deficiencies by using such stimuli,” he told me via email. As for the warning, he said, “I presume that Oculus are covering themselves — [the] same with Sony et cetera.” 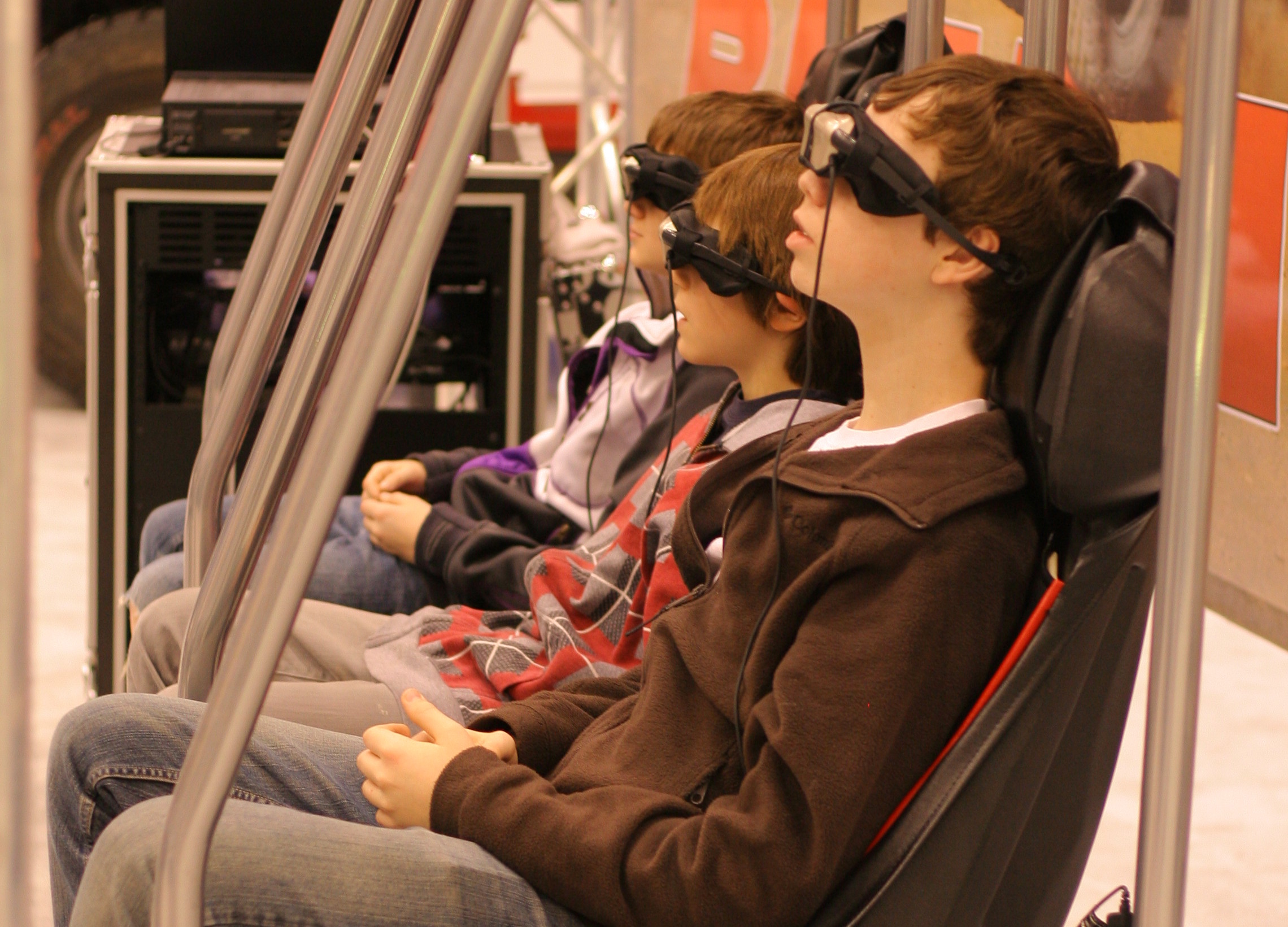 Above: A virtual reality racing set-up.

However, he did point out that HMDs are open to problems of misalignment between the user’s eyes and the physical position of the headset’s optics. A 1997 review of VR health and safety reported that this can lead to visual discomfort symptoms, transient heterophorias — where one eye points to an unnatural position at rest — or muscle imbalances. Again, the author noted these changes are thought to be temporary, but that’s without considering the long-term, extended VR use we’ll shortly be witnessing.

I asked Howarth about the idea of using VR for extended periods of time — say, 12 hours a day. “It’s not ideal,” he told me, “for lots of reasons. The primary ocular reason is that, because the screen will be at the same distance, the stimulus for accommodation is constant throughout.”