Gaming, it turns out, is a good way to add a few billion dollars to your bottom line.

In 2014, the top 25 public companies in the game industry made $54.1 billion in revenues, according to research-firm Newzoo. That’s up 10.4 percent year over year, and that growth comes from nearly all sectors that make up the gaming market. This is indicative of an industry that is healthy and expanding in several different ways — although nothing is growing as fast as mobile. These 25 public companies actually made up 65 percent of the $83.6 billion game market.

Tencent, the owner of developer Riot Games and its free-to-play mega-popular multiplayer online arena battler League of Legends, led all companies. Sony, Microsoft, EA, and Activision followed behind to round out the top five. In terms of mobile, Apple, Google, and Candy Crush Saga publisher King led the bottom half of the top 10. Publishers Nintendo and Ubisoft followed at No. 9 and No. 10, respectively.

Going back to Tencent, not only did it top the list with $7.2 billion in gaming revenues (according to Newzoo estimates), but it also had the second largest growth at 37 percent year over year. Only Google, which grew from $1.4 billion in 2013 to $2.6 billion, is expanding faster at 89 percent. 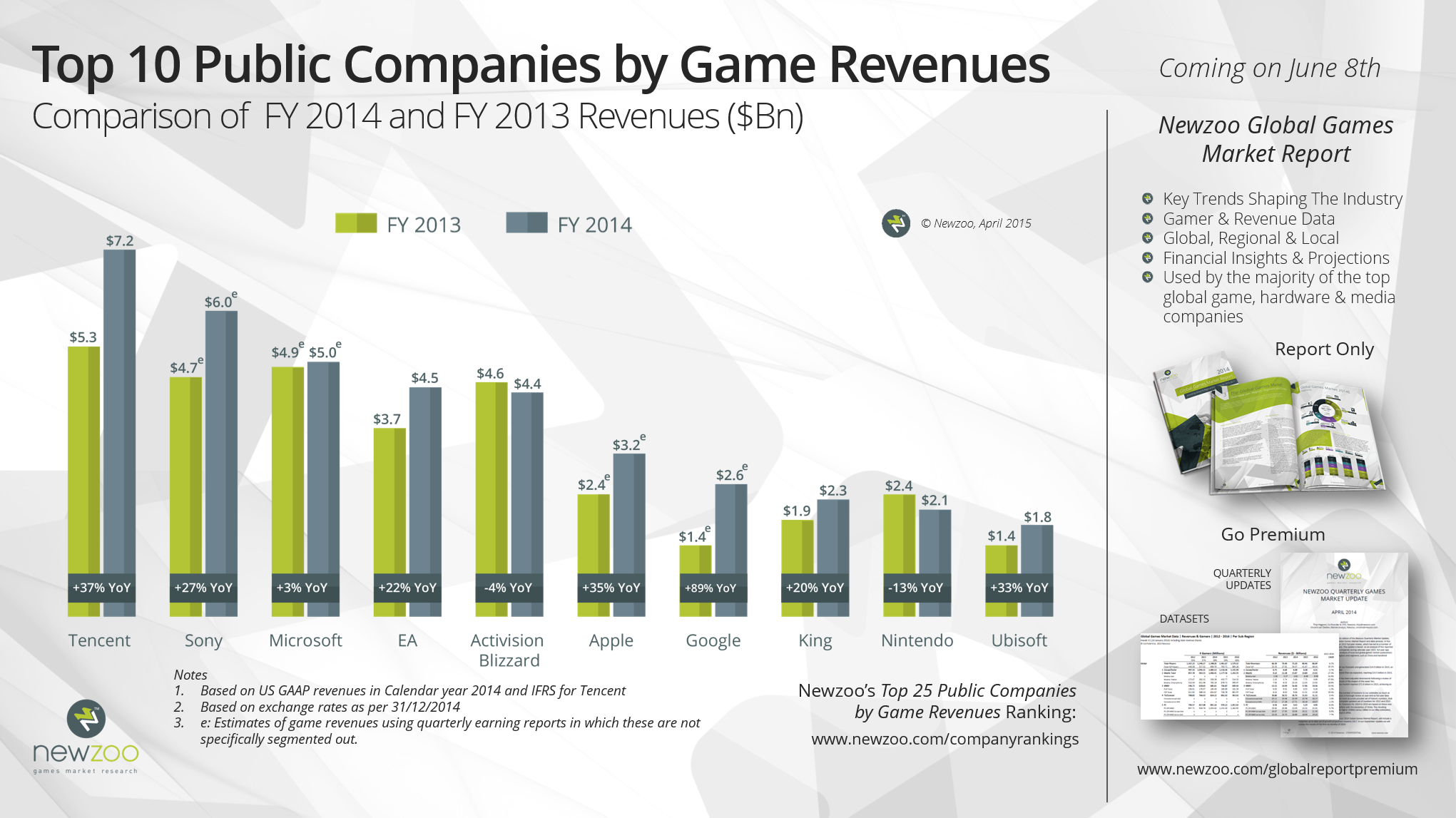 The above chart shows how the representation breaks down among the various kinds of gaming companies. Tencent is tops with its huge free-to-play PC games that are enormously popular in both established and emerging markets. Traditional gaming companies like Sony, Microsoft, and EA still make up the bulk of the spending, but mobile — led by Apple, Google, and King — is growing at a huge rate.

Only social games from companies like Zynga and Facebook have failed to crack the top 10, and that’s also the big gaming sector that is shrinking. The growth of mobile games suggests that casual spending has shifted from the Web to smartphones.

Beyond where gamers are playing, Newzoo also provided some insight about one of the places games come from. The research firm noted that Japan, which accounted for nearly 34 percent of all revenues in 2013 among the top 25 public companies, only made up around 30 percent in 2014. And that decline comes despite Sony’s 27 percent year over year growth to $6 billion in revenues.

“Without Sony, the numbers would have looked much worse,” reads the Newzoo report. “Tellingly, nine out of the 16 publicly listed Japanese companies reported a year on year decline in revenues in 2014.”

That could change in 2015 as Nintendo, one of the major Japanese game publishers, starts embracing mobile.

Newzoo has even more about this data in its most recent report, which you can find here.