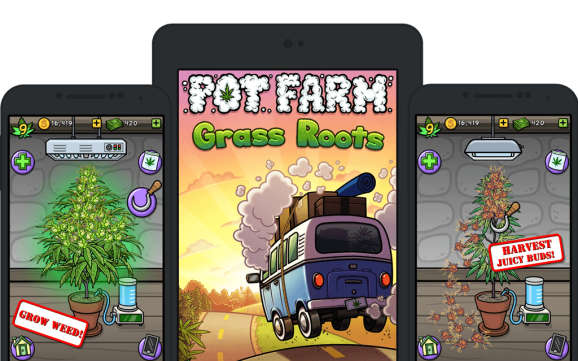 Here's a good way to spend your April 20, but you don't have that option if you're using an iPhone.

Apple’s founder Steve Jobs was big on recreational drug use — at least when he was younger — but that doesn’t mean the company he founded is cool with it.

Pot Farm: Grass Roots is a game about growing weed, and gamers have downloaded it millions of times. But not one of those downloads is on an iOS device. That’s because developer East Side Games is concerned about Apple’s app-review process, which has banned games that feature political, sexual, and drug-related content from the App Store. Growing, selling, and consuming marijuana is still illegal in most U.S. states — and it’s only legal for recreational use in Washington, Oregon, Alaska, and Colorado. So you can only get Pot Farm: Grass Roots on Android’s Google Play market, or you can play its predecessor, known simply as Pot Farm, on Facebook.

Apple has long had strict rules against apps that “encourage excessive consumption of alcohol and illegal substances,” according to its guidelines. So East Side Games decided not to release Pot Farm: Grass Roots on iOS despite its status as a narcotic in legal limbo.

And it’s odd that Apple has any guideline against certain kinds of games depicting drugs considering you can buy all of the following through iTunes:

You can find all of those things because Apple does not curate the films, books, or music that it sells in its online store. The company will not prohibit the sale of those items based on its content. But it does not do the same for games.

This double standard is even more ridiculous when you look at Apple founder Steve Jobs’ history with narcotics.

“I have no words to explain the effect LSD had on me,” Jobs said in an interview with the Department of Defense, which Wired was able to acquire through a Freedom of Information Act request.

The government agency was running a security-clearance check on Jobs because it was using the Pixar Image Computer to render intel it was collecting from satellites, and Jobs was running Pixar at the time.

“I can say [LSD] was a positive, life-changing experience for me,” Jobs continued. “And I am glad I went through that experience.”

Jobs also told the Department of Defense that he used marijuana when he was younger and that it helped him relax and made him more creative.

But those past experiences didn’t prevent Apple from putting rules in place that limit how games can use drugs.

“We view apps different than books or songs, which we do not curate,” reads Apple’s guidelines. “If you want to criticize a religion, write a book. If you want to describe sex, write a book or a song, or create a medical app. It can get complicated, but we have decided to not allow certain kinds of content in the App Store.”

Earlier this year, Apple did loosen up its rules specifically when it comes to marijuana. It is now letting the app Massroots, which is a social network for stoners, operate in any state where marijuana is at least legal for medical use. But Apple is forcing Massroots to only let people who live in those states register for its service through an iOS device.

But Apple still has not come out and told developers of games like Pot Farm: Grass Roots that they can now release their apps. We’ve reached out to Apple to ask for more information. We’ll update this article with any new information.

Pot Farm: Grass Roots is just one of a number of games that cannot exist in its current form on iOS. Several other developers have tried releasing games that explore war, sex, and sweat shops only to have Apple prohibit them. One of the biggest examples of this is Endgame: Syria, which is a strategy app that explores that real-world civil war. When developer Auroch Digital tried to release Endgame on iOS, Apple said it doesn’t want any app that depicts real conflicts.

To bring Endgame: Syria to iPhone and iPad, Auroch had to change the name and any reference to real places.

“[I’m] very disappointed,” Rawlings told GamesBeat back in March 2013. “It’s a long, drawn-out process that costs time and money to go though. [Apple’s process] is a major hindrance to our art as game creators.”

Knowing that, East Side Games avoided even submitting Pot Farm: Grass Roots to the iOS store. Instead, it decided to make the Apple-safe, scrubbed version from the beginning. That’s what led the studio to make Munchie Farm.

Last month, the studio released Munchie Farm for iOS. It is almost the exact same game as Pot Farm: Grass Roots, only it’s all about growing hot dogs and nachos instead of pot. It takes place in a world where these kinds of munchies are illegal — where you have to grow your donuts in your basement so the government won’t find out and arrest you.

It is a rather political premise that lampoons the idea of setting arbitrary limits on what people put in their bodies. What is it about pot that should make it illegal and what is it about calorie-loaded carbohydrates, which inevitably lead to heart disease, that prevents them from meeting the same fate? Munchie Farm mocks those that are so certain about where that line is … like Apple, and you can play it now on your iPhone or iPad.