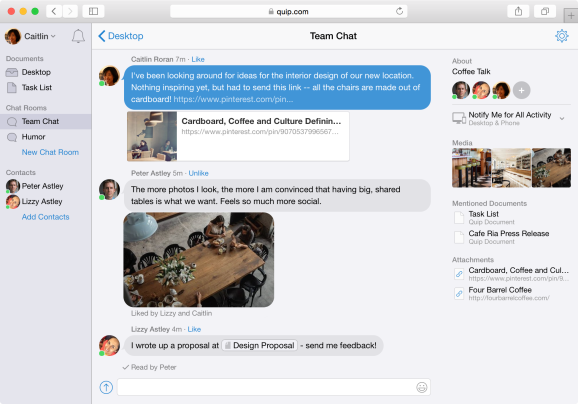 Mobile-friendly word-processing startup Quip is doing much more with team chat. Today Quip is announcing new Chat Rooms, featuring integrations with documents, as well as new features that should bring some fun to the process of talking with your colleagues.

Emoji, a tool for making custom memes, and slash commands for triggering actions with a few keystrokes are part of the new Chat Rooms, Quip cofounder and chief executive Bret Taylor wrote in a blog post today.

“Your team can use Quip as a collaboration hub and reduce your dependence on email at the same time,” Taylor wrote.

The updates to Quip — which has had chat before but is now emphasizing it for larger groups of users across several rooms — make it a more obvious choice for real-time messaging across companies, not just a tool for collaborating on documents and spreadsheets.

Slack, now valued at $2.8 billion, has become the most trendy player in the team-communication business, and the new Quip features do call Slack to mind. And that might not be by accident. As Taylor told VentureBeat in an email:

We view this launch largely as an expansion of the communication features already in the product, but companies like Slack and Atlassian have certainly influenced how we think about how modern teams communicate. The broader trend we see is teams at work moving away from email towards new forms of communication like Quip, which is driving the growth of our and many other companies.

Quip, to its credit, is making sure not to overlook its own core products in today’s launch. You can mention documents with an @ sign in chat, and documents that have been mentioned recently appear to the right of the chat window in Quip. Plus, you can start a document and share it with everyone in the chat room with one click.

And it’s possible to integrate other apps into Quip. Quip does have a Slack integration, interestingly.

But most importantly, playing with Quip’s new chat rooms is just that — play, which is a nice addition to what ultimately is business software.

Once you’ve uploaded a picture in the meme generator, you can trigger it and then add text on the fly to overlay a fresh message on top of the picture. And you can get quirky animated GIFs, courtesy of Giphy. Put simply, Quip is more of a fun place to dwell now.

San Francisco-based Quip started in 2012. The startup announced a $15 million funding round in 2013.