Vungle has been part of the huge success of video ads for mobile games and apps. But it wants these efforts to become more effective and interesting, so it is launching Vungle Creative Labs, a London-based team of artists, filmmakers, designers, and interactive specialists to help its clients create high-impact mobile video ads.

Vungle wants these ads to combine art and science to help clients increase their in-app downloads and engage consumers. Its service is used in more than 10,000 apps that generate 2 billion unique views a month. As a result, it has learned a lot of tips during the past few years about the kind of offerings that work, said Zain Jaffer, Vungle’s co-founder and chief executive, in an interview with GamesBeat. 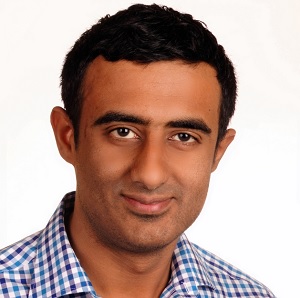 Above: Zain Jaffer, CEO of Vungle.

He said that the company has learned what constitutes an excellent mobile-ad experience that is contextually relevant in apps such as the enormously popular Trivia Crack game. Vungle can produce multiple versions of an ad and test which one works best with users.

“We offer this service to our most premium advertisers,” Jaffer said. “Creative work is as important as the placement. Creative is essential for the user experience, for motivating the user to download an app. We have built a lot of technology around this that combines machine learning and data science as well as art. The biggest mistake is people don’t combine the skills.”

In the past few years, video advertisers have captured people’s attention with slick, TV-like ads. But they’re not tailored based on learnings. Jaffer believes that the low-hanging fruit has been taken, and now it’s time to work harder for business.

“This is a very high-hanging fruit,” he said. “It ‘s reliant on data. Others can’t compete with us on creative DNA. We produce creative trailers. We have a lot of tech and intellectual property. We want to ingest data and optimize creative. That’s very hard to do. I think it will create a huge distance between us and our competitors.”

What are some of the learnings? Well, in China, red is a lucky color. On Wall Street, it signifies financial losses. That’s easy. But when you show a video ad, and you showcase an actual smartphone or tablet, you get a 38 percent increase in click-throughs for the ad. That’s not obvious, but it’s based on data, Jaffer said. Similarly, when you show real game footage in a video ad, you get a 33 percent increase in click-through rates.

Si Crowhurst, who heads Vungle’s creative-and-optimization group, said in a statement, “We noticed a lot of advertisers that produce creative and just hope it works. There was no science put into how it would perform. At Vungle, we own the entire stack, so we have access to real-time data that allows us to objectively see if our creative content is successful. This insight informs creative choices, making us proactive and agile. We continually study the space, test and innovate to develop creative best practices that are applied to everything we do.”

Vungle Creative Labs is connected with the Vungle Exchange, where brands can make programmatic ad buys for in-app video ads. The exchange is built from the ground up for mobile video, and it instantly serves high-resolution, high-bit-rate 15- and 30-second video ads that are brand safe, format agnostic, and optimized for advertisers and publishers, Jaffer said.

Vungle was founded in 2012, and it competes with rivals like AdColony, Yahoo’s Flurry, Unity Technologies, and Supersonic. Vungle has raised $25 million to date from investors, including Google Ventures, AOL, SoftTech VC, and Tim Draper.

Over time, Vungle plans to expand its labs internationally.