Demographics Pro is launching a tool that makes it easy for marketers to find the most influential people on the Internet. The company’s new Influence Search tool lets users reach specific target audiences on Twitter, Instagram, and YouTube.

It’s kind of a marketers dream, as Demographics Pro has created a searchable database of Internet data that can be used to identify the people, media, and brands that most influence target audiences on the social Web. I used it to do a search on myself, and it came up with about 30 pages of data on my influence on Twitter. (Yeah, this is kind of like Googling yourself.)

A 30-page analysis showed that I hold influence with older gamers, and the average income of those influenced is $74,700. I am the No. 3 (or No. 4, depending on how you count) most-influential journalist among players ages 25 to 39 in the U.S. Demographics Pro has been doing this kind of research for about four years, but now it has something new. It can figure out that, overall, I come out at No. 19 in influence with this target audience. The research shows you that journalists are not the most influential people on social media when it comes to gaming. You can’t come up with this kind of analysis very easily.

“Historically, influence has been calculated based on topics, like gaming or wine,” said Paul Hallett, chief executive of Chapel Hill, N.C.-based Demographics Pro in an interview with VentureBeat. “But we go [further] than that. The people who influence 20-year-old gamers in San Francisco are far different from the 40-year-old gamers in London. We help brands hone in on the right target for their message.”

The tool can be used to instantly answer questions that pose quandaries for marketers who often have to use blunt mass-market advertising to reach a small group of potential targets.

Who are the political candidates and grassroots advocates who have the most influence with baby boomers in Florida in a social-media campaign? What media brands are most influential with environmentally conscious parents living in California? Which musicians and bands are most popular with men who drive Ram Trucks? Who might be the best video creators for L’Oreal to work with on a campaign targeted to teenage girls in the Midwest?

In doing a search, you can select basics such as gender, race, income, interests, and location. That allows you to narrow down who the most influential people are. These are the “long tail” people who talk a lot about a brand or a subject and are trusted by a large number of individuals. You can find the right bloggers, YouTube video creators, musicians, and others who influence 20-year-old single men in San Francisco or the 40-year-old married mothers in Kansas, Hallett said.

You can narrow down a search with the tool by looking for influencers related to a certain hashtag. If you want to zero in on mobile games, you can search for influencers with hashtags like #clashofclans or #supercell. You can chain these together, and the system will come out with a ranking that effectively tells you who the influencers are for mobile gaming, Hallett said. This way, you can find influencers in categories that aren’t predefined.

“One of our clients wanted to locate kite-surfing influencers,” Hallett said. “We found 300 of them. A large financial company wanted to find influencers in foreign exchange. We gave them a ranked list of 1,000 accounts that are influential.”

The service has an easy-to-use menu system where you can check off boxes for the details that you want to search for. It comes back in a few seconds with hundreds of ranked search results, including audience-specific influence scores and campaign-ready social-media account details.

You can use the tool to come up with a short list of targets for influencer marketing, talent matching, PR and communications, market research, and political campaigns. For these targets, you can discover that those who have the most users or readers aren’t always the most influential in your slice of the market, Hallett said. 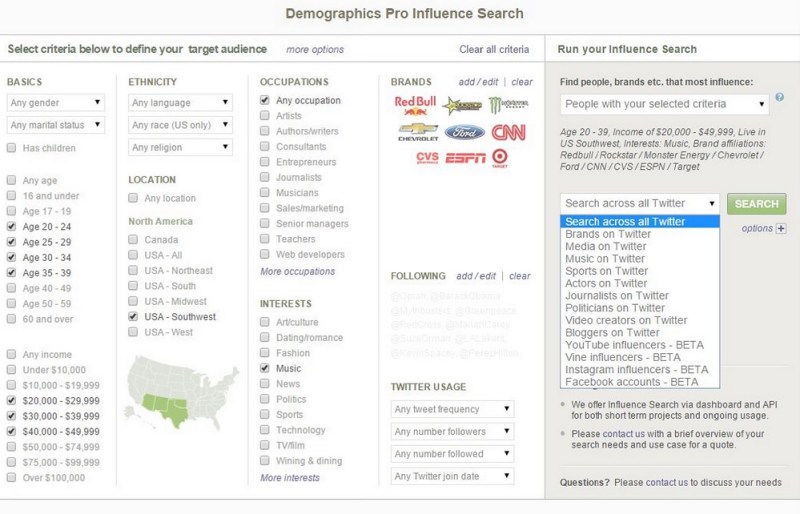 Influence Search dashboard subscriptions cost between $300 and $5,000 a month, depending on licensing needs for search results, required functions, and depth of search. The tool is also available via applications programming interface (API) to power influence search analytics dashboards. About 70 percent of Demographics Pro’s customers use its API.

Founded in 2006, Demographics Pro has 15 employees.

“It’s a massively crowded space on the surface,” Hallett said. “But we power a lot of it.”

Demographics Pro started out with a focus on geo-mapping, producing city guides that were later enriched with social-media buzz for restaurants, bars, and local events. It pivoted in 2011, taking location profiling algorithms (developed for the city guides) as a base. It figured out a methodology for profiling people based on their social-media presence/usage, to infer location, gender, age, income, occupation, interests, brand affiliations, and more. For a few years, it has offered a service where it can tell you about the demographics of certain social media accounts. Now it is adding the search and rankings capability on top of that.

Since 2011, these methodologies have been used to profile more than 300 million people, forming the basis of analysis and insight services licensed to agency and brand customers. Hallett said that the system is compliant with privacy concerns, as you can see what accounts influence people, but you won’t necessarily see the names on those accounts. 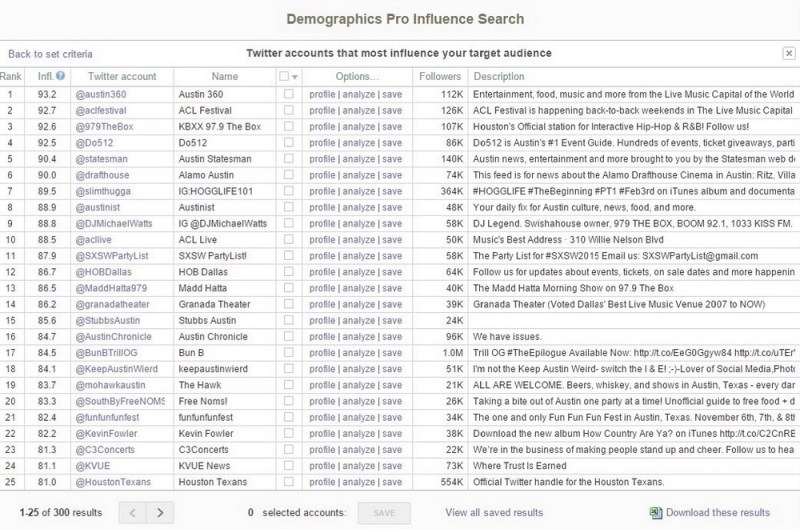 Above: Demographics Pro can rank the influencers that matter to you.