Don’t give up now!

Sure, the bosses in the fourth wing of Hearthstone’s Black Mountain adventure are tricky, but that’s why we’re here to help you with this guide. Below, you’ll find strategies to assist you with each encounter so you can earn those new cards.

Note that these strategies only cover the normal versions of each fight, although we do talk a bit about what’s different in the Heroic versions. Above: Count those eggs before they hatch.

Hero power: The Rookery (give all Corrupted Eggs +1 health, then summon one.)

Razorgore starts with one 0/1 Corrupted Egg, and his Hero power will give all eggs on the board +1 health and summon a new one for just 1 mana, so he’ll likely use it every turn. Once they have 4 health, they hatch into 7/3 Chromatic Drakes.

You just need to stay ahead of him in board control, which can be a little tricky since he’ll also play regular minions along with the Corrupted Eggs. However, the eggs can’t hurt your minions, so it’s safe to destroy them as soon as you can. The Mage’s, Rogue’s, and Druid’s Hero powers are good here, since they can each help you take down those Eggs and free up your minions to damage Razorgore. Area-of-effect spells also work great.

This whole fight is really about board control, so if you play an aggressive deck with a lot of cheap minions, and you should outpace Razorgore. Also, if you think you can kill Razorgore in the next few turns, you can start ignoring the Corrupted Eggs, since they’ll only hatch when they have 4 health anyway. Even if one of them hatch, the Chromatic Dragon only has 3 health. You should be able to destroy it before it can hurt you.

Heroic difference: Razorgore starts 15 Armor and the Corrupted Eggs start with 3 health, and they hatch at 5 health into 7/7 Chromatic Drakes. 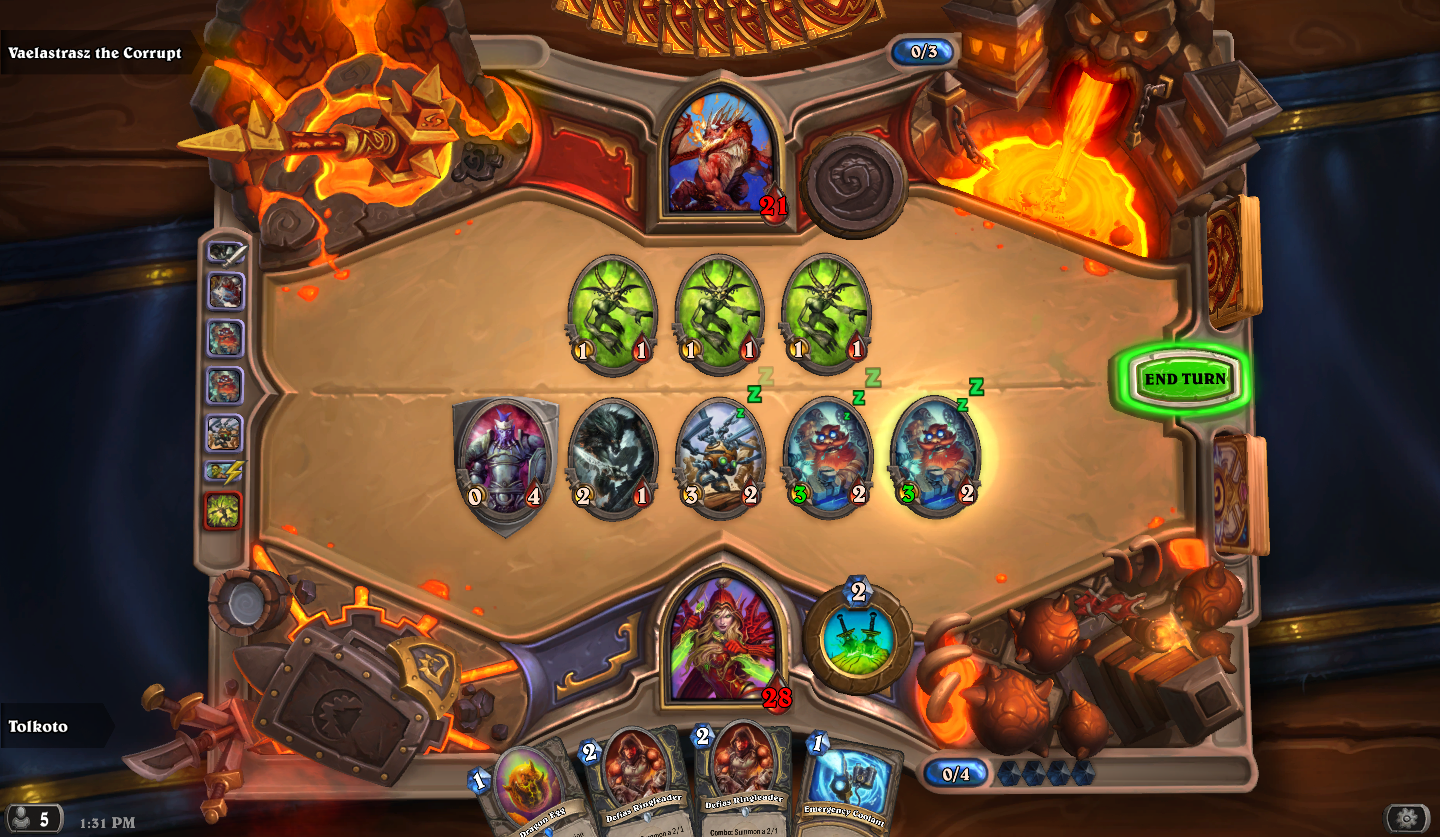 Above: Time to get cheap.

His Hero power lets both players draw two cards for 0 mana. He’ll also use a the 1 mana Druid spell Naturalize that destroys a minion and has you draw 2 cards.

Having all these cards isn’t necessarily a good thing. Vaelestrasz will take advantage with minions like the 8/8 Clockwork Giant, which costs less mana depending on how many cards the opponent has in his hand. That minion usually costs 12 mana, but Vaelestrasz can play it on his second turn once he has you drawing tons of cards — so many that you may lose cards because your hand becomes too full. He also has a spell card called Burning Adrenaline, which costs 0 mana and does 2 damage to your hero. He can play a lot of these to keep his own hand from getting full.

To counter, play a deck with a lot of cheap cards, so you can keep your hand from becoming full. Even 0 mana cards can help, since you can play as many of those as you want. Also, take advantage of all those cards in your hand with the Mountain Giant, an 8/8 minion that costs 12 mana but is 1 mana cheaper for each card in your hand. I used a Rogue deck, since that class has a lot of cheap cards that deal damage. The 0 mana Backstab, which does 2 damage to an undamaged minion, is especially nice. Zoolocks — a Warlock deck full of cheap minions — is also a good option.

Heroic difference: Vaelestrasz starts with 15 armor. His Hero power now has each player draw 3 cards and gives him a mana crystal. Above: Use that card as soon as you can!

They each cost 1 mana to use, and you’ll want to get rid of them as soon as you can. Just play another deck that has aggressive, cheap minions so that you can waste a mana each turn getting rid of Brood Affliction and still play some cards. Druid is nice here, since he has a lot spells that give him extra mana, like Innervate and Wild Growth.

Heroic difference: Chromaggus starts with 60 health, and the Blood Affliction cards are more powerful and cost 3 mana each. Hero power: True form (Turns him into a dragon.)

He’ll use his Hero power on his first turn, which transforms him into a dragon with 30 health and 30 armor. He also immediately has 10 mana. His new Hero power is Wild magic, which allows him to put a random spell from your class into his hand for 1 mana.

That seems rough, but Ragnaros will actually help you by giving you cards each turn, including the 0 mana 6/3 Son of the Flame, which also has a Battlecry that lets it deal 6 damage; the 0 mana 6/6 Living Lava with Taunt; and the spell Die, Insect!, which does 8 damage to a random enemy.

Even still, the fight will be tough at first, since Nefarious has so much mana. Play a control deck with a lot of spells and minions that can keep him in check until you catch up with him on mana. Then, with the help of Ragnaros’ cards, you should eventually establish board control and win.

Heroic difference: Nefarian has 50 armor after transforming. Ragnaros will only give you one card.