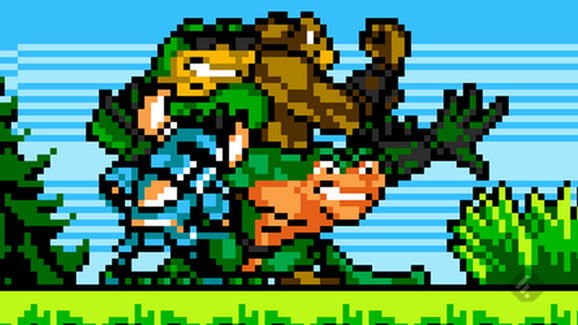 It’s a classic prank: calling up GameStop and asking the associate working if they have any copies of Battletoads. The joke is that the three anthropomorphic stars of that series haven’t appeared in a game in two decades.

But that’s about to change.

The Battletoads are back as boss characters in the Xbox One version of the celebrated 2D adventure platformer Shovel Knight, which debuts next week. This is to help the game stand out on Microsoft’s console, since it debuted last year for the Wii U and PC. But it’s also a triumphant return for some of 8-bit gaming’s most colorful and memorable characters that many figured would never happen because it was not clear who owned the rights to Battletoads.

But thanks to Yacht Club Games, we now know that Microsoft can do whatever it wants with the Battletoads characters.

“In terms of how all this happened, we simply asked Microsoft if they’d be up for letting us use the character,” Yacht Club Games developer David D’Angelo told GamesBeat. “They got in touch with Rare, and everyone said yes.”

Rare is the original developer of Battletoads. The studio built this classic for the arcade and then for the Nintendo Entertainment System, Game Boy, and Sega Genesis (other developers ported it to even more platforms). ,

“We are all big Shovel Knight fans,” Microsoft’s ID@Xbox director Chris Charla told GamesBeat. ID@Xbox is the publisher’s independent-gaming division that works with studios to help them self-publish their software on Xbox One.

“Last summer when we were talking to Yacht Club Games about bringing it to Xbox One, the Battletoads inclusion came up as a potentially great way to highlight the Xbox One release,” said Charla. “The team at Yacht Club Games was really excited by the idea, as was Rare’s studio head, Craig Duncan, who was actually playing Shovel Knight on his 3DS around that time. Everyone at Microsoft, Rare, and Yacht Club Games was thrilled to bring together these two awesome properties.”

Two decades of closures and acquisitions

But the reemergence of the Battletoads is a bit surprising considering the franchise’s long dormancy and confusing ownership history.

Battletoads had a number of different publishers, including Tradewest, which went defunct in 1994 when Williams Entertainment bought it. Then in 1996, Midway bought Williams before going out of business in 2009.

During that period, Nintendo purchased a 49 percent stake in Rare, and the studio went on to publish some of its biggest games — although none of these were Battletoads. In 2002, Microsoft swooped in and purchased Rare for $375 million.

Through these various acquisitions and closures, many assumed that the Battletoads intellectual-property rights were tangled up among several companies. But it’s clear that isn’t the case anymore.

“It was actually really straightforward,” said Charla. “After getting Yacht Club Games and Rare on the phone to discuss overarching ideas, the Yacht Club Games team hit the pavement and started creating concepts, game designs, animations, music, and more with Rare’s support.”

Charla said that Rare worked with Yacht Clubs to provide input on the creations before eventually signing off on all of the final art, sound, and gameplay.

“In early 2015, we started talking to Yacht Club Games about Windows 10 support, which they were very excited about,” said Charla. “That enthusiasm led to the Shovel Knight and Battletoads reveal video at GDC, which was awesome.”

Obviously, this means that Microsoft is willing and able to make new Battletoads stuff. We’ll see if their return in Shovel Knight is only the first step in something bigger.