Games are shrinking. But gaming market isn’t — games helped Apple’s App Store sales reach a record-breaking $15 billion in 2014. If developers figure out how to squeeze games down for the tiny 2-inch screen of the new Apple Watch, they could have a solid foothold in the emerging wearable games sector. And with analysts predicting up to 40 million Apple Watches sold in 2015, this could be a good space to be in.

But Apple did little to pave the way for game makers when it announced its Apple Watch in March. The company focused on health and fitness applications for its wearable, never mentioning gaming in its March press conference. Developers still don’t have access to the device’s full feature set and development tools. As of now, Apple’s preview page only has two games.

It’s still early, and Apple is providing little assistance, but game makers are taking the initiative already. Mobile gaming is expected to reach $30 billion in 2015. If wearable gaming is going in the same direction, developers won’t want to miss out.

Patrick Walker, an analyst at research company EEDAR, says that as consumers begin interacting with wearable technology, gaming will become a bigger part of the conversation. He tells GamesBeat that Apple Watch could follow iPhone’s history, moving from utility use toward gaming eventually.

“Initially, the market for Apple Watch games will be modest because of the limitations of the platform in terms of screen size and input methods,” Walker says. “Most consumers will ask themselves, ‘Why would I play this experience on my watch instead of my smartphone?’

Some developers are hoping to pioneer wearable game development and others are simply excited about experimentation with a new device. But making the first Apple Watch games hasn’t been easy for any of them.

Tied down and held back

At launch, all games are tethered to the iPhone, with the watch serving only as a screen interface for applications running on the smartphone. Third-party developers aren’t yet able to create standalone native Watch applications. This essentially makes the Watch a thin client.

Beyond this, developers do not have access to the Apple Watch’s Digital Crown’s full feature set, and many of its other advanced features of the Watch, such as the Taptic Engine and the heartbeat sensor, are not yet available to developers. Apple could permit native app access to developers soon, but for now all apps including games will essentially be extensions of iPhone apps.

But even when full access to the device and its tools opens up,  Jim Ying VP of games publishing at messaging service Tango says that it’ll take creative minds to go beyond this.

“Most iPhone game developers see the Apple Watch as being a second-screen experience because their starting location is in the smart phone space,” Ying told GamesBeat in an interview. “They look at their existing, successful business model and see how the watch can improve that. There are also challenges to standalone games like screen size and battery life. It will take creative minds for that standalone experience to come to fruition.”

The watch itself presents its own challenges when it comes to app and game development. Developers say that animations aren’t as easy to implement on Watch as they are on smartphones. They must use old-fashioned image sequences to show animations on Apple Watch, just like a paper flip-book. Smooth animations require more images for these sequences, which hogs precious space. 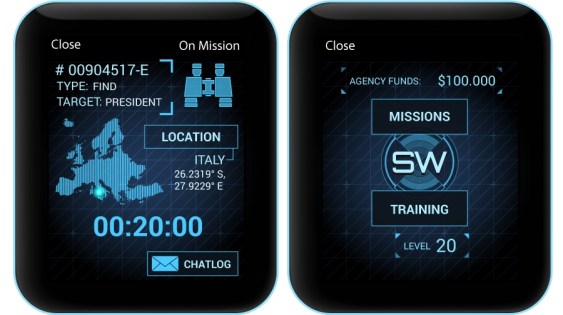 Above: Bossa Studios’ Spy_Watch uses Apple’s own notification system to make you feel like a real secret spy.

Just as the iPhone and iPad required a different mindset for game making, the Apple Watch will need its own approach. Bossa Studios chief operating officer Vince Farquharson, creator of upcoming launch title Spy_Watch, says that shoehorning iPhone-style games on the Watch is the wrong approach — “I think it’s a sin,” Farquharson tells GamesBeat.

“Nine out of 10 ideas are wrong for the watch. All the traditional ideas you can come up are just wrong. Wrong, wrong, wrong. It takes too long to interact with it, the screen is too small to show that, or it’s going to drain the battery. You have to be quite smart about it. You’ve got to look at the features and limitations and figure out a way to do something that is complementary to the device.

“You don’t try to work at how you get a game on another platform — that’s just the wrong way of thinking about it. You look at what is unique — what is cool, and that is your start point. That’s a much more interesting way to go about it.”

Spy_Watch is an interactive role-playing story reminiscent of old text adventures, where players will take up the role of a spy. Bossa Studios’ workaround was to use the Watch’s built-in notification systems as a way to convey the story. Farquharson called the Watch’s initial limitations “exciting” and said that it helped fuel experimentation within the studio. The wearable also has some good points, he noted.

“It does things that others aren’t quite as good at,” Farquharson said. “It’s the best fast-notification device that exists, so we worked at how we could use that for a game rather than fight against the tide all the time, trying to fit a traditional experience onto that device that didn’t exist when those experiences were designed.”

Robot 5 is a new studio created specifically for the sole purpose of creating Apple Watch games, and it has three prepared for launch, including a match-3 puzzle game and a football game. It plans to release 10 games by mid-year for the Watch. The studio’s Peter Chen admits that it has been a lot of work to get these going.

“Part of the challenge and limitation is time,” Chen told GamesBeat. “Adding the kinds of complex scenes that are in our games is very challenging and time-consuming. For example, changing the color of a football in an iPhone game might take a few minutes by changing a few lines of code. In an Apple Watch game, this change might take several hours depending on how many times the football is used in different scenes.

Some developers have mentioned responsiveness for third-party Watch apps, a side effect of the client-type connection to the iPhone. This means that fast-paced action games may not be a good fit right now.

“There does seem to be a delay from when you tap a button in a third-party to when the button action takes place,” said Chen. “Apple will likely optimize this issue on launch or shortly after. But there will always be some kind of delay when tapping buttons in third-party apps because the button tap goes from the Apple Watch over Bluetooth to the iPhone, and then back from the iPhone over Bluetooth to the Apple Watch.”

Aki Järvilehto, the CEO of Everywear Games and developer of upcoming Watch fantasy role-playing game Runeblade, says that a change in mindset is a bigger obstacle than any technical limitation.

“The form factor itself is certainly very different, and there are a number of parameters that you’ll have to operate within that we simply have to learn through trial and error,” Järvilehto told GamesBeat in an interview. “From the development point of view, the biggest change is without a doubt a change in the mindset. Smartwatch games will have to integrate into our lives smoothly. They need to feel effortless and fun to play. And that’s a radical change and a completely new question to answer: How do you deliver fun in 5-15 seconds? How do you deliver a gameplay experience that evolved over days, weeks and months?”

Keep it short and simple

Even as these first games debut on Apple Watch, developers are already conscious of gameplay session times. More than one developer told GamesBeat that its goal was sessions of 15 seconds or less for this first launch batch. But this is less about technical limitations and more about player comfort and enjoyment.

Eyes Wide Games, developer behind launch title Watch This Homerun, said it became clear early on that holding your arm up to your face wasn’t going to work and that this consideration actually helped open up a new style of gameplay.

“Early in development, we built a physical mockup to wear throughout our day to get a feel for being able to play whenever we lifted our arm,” CEO Stephen Griffin said. “Based on that experience two things became clear: It wasn’t comfortable to hold your arm up continuously for long periods of time and secondly, it really felt more natural to lift up your arm spend a short amount of time looking at it then put it down much like you do with a normal watch. 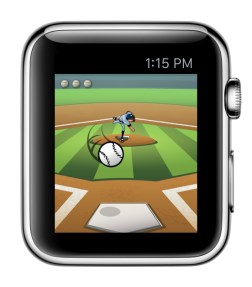 Above: Watch This Homerun is the first of a series of Watch sports games from Eyes Wide Games.

“Our conclusions were later confirmed when we heard rumors that Apple suggested a 10 second goal for Apple Watch apps at developer labs. While it was shorter than we originally planned, it freed us to drop several assumptions about what we had to put into the game.”

What his team wound up with, he said, is a new style of game.

Griffin says that this short kind of game would have been impractical on a mobile phone due to the time it takes to pull it out, unlock it, start the app, and run the game. It could be that these shorter experiences could build up to equal more play time in the long run, he says.

Griffin believes that the ease of accessibility of the Apple Watch could have it replacing mobile games eventually.

“In terms of number of play sessions and total playtime, I think that Apple Watch games will replace phone games for everyone who has one, much like casual mobile games replaced casual desktop games. It’s about where people are spending their time.”