Just like with the iPhone, it’s going take a bit of work to find the good games for your new Apple Watch.

Today’s launch of the Apple Watch brings with it hundreds of new apps of every type for the little (just over 300 pixels wide) screen. While the benefits of wrist-worn health- and fitness-based applications are immediately obvious, it’s a bit harder to figure out how games will work on the wearable. But that’s not stopping them from jumping on the newest addition to Apple’s ecosystem. And with analysts predicting sales of up to 40 million Apple Watches this year, why wait?

The device presents plenty of new challenges for game makers used to larger smartphones and tablets, and concerns over battery life also factor in. According to the developers GamesBeat has spoken with, making Watch games is not easy. Some of these developers have taken the easy way out, launching companion apps that merely add to an existing iPhone game’s functionality. Others have wrangled ports of existing games onto the little screen. And a few are putting forth depressingly basic offerings such as digital tic-tac-toe games. But a handful of developers have embraced the Wild West situation, taking chances on what could be a hot new gaming platform.

We’ve rounded up some of the most promising of these micro-gaming experiences for Apple Watch launch day. 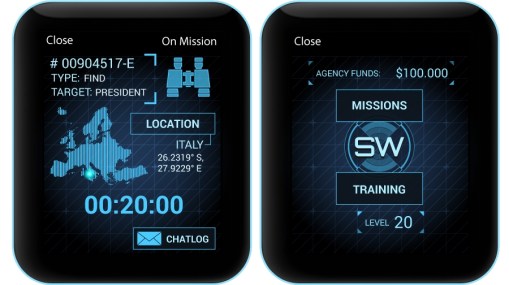 Above: Bossa Studios’ Spy_Watch uses Apple’s own notification system to make you feel like a real secret spy.

Spy watches in James Bond films seems like some ridiculous far-off future, but now that wrist computers are reality, Bossa Studios embraces that theme fully. The creators of popular games such as Surgeon Simulator and I Am Bread have created a text-based experience that uses Apple’s own notification systems to tell a story of a spy agency that has fallen on hard times. Real-time messages will come to the player, updating them on missions that will eventually have them working as a spy to revive the fallen agency. You don’t even have to open the app to play Spy_Watch ($2).

Bossa Studios’ chief operating officer Vince Farquharson says that the idea is to make you feel like a real spy equipped with a special device.

“This game we made sits in the background. It lives with you for five or six weeks, and you just fall into the role — you believe you’re talking to friends and secret agents. And it all plays out in real time.”

Notifications will arrive on the Watch just as they would from actual individuals, through Apple’s built-in notification system, which goes a long way towards realism. The timing is just as realistic: the agent you work with will get on a plane and won’t contact you for another two hours, for example.

The role-playing game franchise is known for its dozens and sometimes even hundreds of hours of gameplay, but Everywear Games is shooting for Twitter-sized entertainment with its Apple Watch exclusive, Runeblade (free, with future paid content planned). The Finnish studio, which is made up of veterans from Remedy and Rovio, is solely dedicated to smart watch game development. They have simplified RPG mechanics to give high-fantasy adventuring a casual appeal, yet Runeblade is a full-blown experience, with various lands to travel to, gear to collect, powers to unlock, and enemies to defeat.

All set up for 15 second sessions at a time.

“While the setting is very ambitious in the context of gaming on Apple Watch, we’ve radically simplified the gameplay itself,” Everywear Games CEO Aki Järvilehto told GamesBeat in an interview. “Game sessions last 5-15 seconds, and fighting monsters happens with single-click ease. Every now and then, you’ll want to log in to the iPhone client to enchant your Runeblade and cast a spell or two. ”

Even if the sessions are short, its depth continually builds with each session.

“The key to Runeblade really is how the game experience builds over time from these ultra-short sessions,” Järvilehto said. “Later in the game, you start to gain magical artifacts, and together with spells and runes, these add a lot of strategic and tactical elements to the gameplay.”

NimbleBit made waves with popular mobiles games such as Tiny Tower and Pocket Planes in recent years, but it gets back to word games with Letterpad, a port for Apple Watch. A search grid of nine letters creates words that relate to given topics, with over 200 puzzles included in the main application. The grid’s 3-by-3 square format is a good fit for the Watch screen, nice for when you’d like to sneak in a few extra games.

Letterpad is a universal app (and it’s free, with paid content), so if you own the iPhone or iPad versions, you also already own the Watch version. 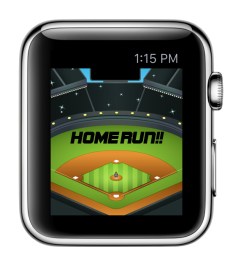 Above: Aim for the fences in Watch This Homerun.

Developer Eyes Wide Games have a line of quick-play sports games in the works for Apple Watch, and its first is baseball game Watch This Homerun. It’s a batting challenge that has players tapping at the screen to nail timing to knock pitches — curveballs, fastballs, and knuckleballs — out of the park. A companion iPhone app features leaderboards to show players’ successes at hitting as well as a forum for chatting about game strategies.

It’s a short game: Each session lasts around 15 seconds. But Eyes Wide Games has packed a lot of meaning in that short time. CEO Stephen Griffin told GamesBeat that the developer strove to create a complex experience down to one exciting moment, one that stood in for the larger game from a narrative standpoint.

“In the case of baseball, that moment was the opportunity to hit a home run to win the game in the final inning at the last at bat,” he said. “We then changed the rules of baseball a little bit to challenge the player to hit not just one home run but frequently multiple home runs. It’s as if the player is the last player at bat and has to hit home runs to catch up and beat the opposing team.”

This has each turn feeling like completing a full game of baseball.

“As a result, every 15 second game matters toward winning the league and leveling up to the next tier in order to face new types of pitches and tougher challenges,” he said. “This approach creates a lot of fun tension for just a 15 second game experience.”

The developer is already at work on its next game in the series, a soccer league-themed game called Watch This Goal. After that it aims to take what it has learned to develop games with more action and adventure elements, moving beyond sports. 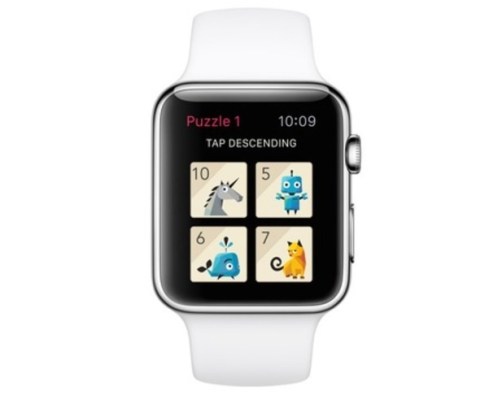 Above: The Apple Watch version of Rules! will feature only four tiles.

Rules! ($3) brings brain-training and puzzle games together and presents them in short sessions, making for a good fit with the Apple Watch. Just like the popular phone game, which Apple called one of the best of 2014, this version (included in the game’s 3.0 update) has you tapping on a grid of pictures under specific rules, with speed being the goal. For each success, another rule is layered on, testing both mind and reflexes. But unlike the phone game, the watch version has just four tiles as opposed to the main game’s 16 tiles. Developer TheCodingMonkeys calls this companion application a “daily brain workout minigame.”

What better story for one of the first Watch games than one about time? Valencia, Calif.-based WayForward  (Shantae, Mighty Switch Force, Duck Tales: Remastered) has created a light story adventure and city-builder across both the iPhone and the Apple Watch, with the role-playing action taking place on the wearable while the kingdom management side resides on the phone. A quest system lets watch wearers take on beasts and solve puzzles, and options for active and passive playstyles enable players tailor the experience to their preferences.

WayForward says that the game’s opening chapter is free, but access to the rest will require an in-app purchase.

Remember Tamagotchi? Even if you don’t, virtual pets are back. What better place for one of these critters than the back of your wrist? Hatchi jumps from the phone to the watch, letting you check in on your pet without ever having to pull your phone out and turn it on. Hatchi keeps its pixelated look on the Watch and brings with it new minigames, including one that tests your memory and something called “Whack-a-Hatchi.”

The Watch version is free for existing iPhone game owners (the app costs $1), but those new to virtual pet raising will have to pay for developer Portable Pixels’ app.

Writer Dave Justus (he writes the Fables: The Wolf Among Us comic series) has penned a branching story that draws Apple Watch wearers into the events following a crash landing on an alien moon. The story of Lifeline ($3) plays out in real time, revealed through messages that pop up directly on the watch throughout the day. Through players’ communications, stranded crew member Taylor will make decisions that will impact his life, making them a part of the story. It’s possible to jump back to a previous part of the story to choose different answers, which could lead to different outcomes.