At last, Activision’s Treyarch studio is talking about Call of Duty: Black Ops III. And the multiplayer changes for this year’s Call of Duty first-person shooter are going to have fans squirming to get their turn at it on Nov. 6, 2015.

And with that extra time, Treyarch has refashioned multiplayer combat to be more speedy and fun.

The new Call of Duty introduces a “guns up” philosophy, where you always have your weapon pointed and ready to fire, except when you’re reloading it. Now you can “mantle,” or hop over an obstacle while running and without losing your aim. You’ll also able to sprint as often as you want. That’s not a realistic feature, but it’s fun. And while you’re sprinting, you can shoot so that you have “full combat control,” said studio design director David Vonderhaar during a presentation at Treyarch in Santa Monica, Calif.

This new Black Ops III still plays at the same 60-frames-per-second speed as games. But it’s no longer going to leave you frustrated because you got picked off while you were in the middle of a jump.

“This was one of the things that was out of balance in our game,” said Dan Bunting, the director of multiplayer at Treyarch. “Nobody likes to get stuck in a mantle. There’s a lot of risk, but not a whole lot of reward for mantling. We wanted to make players feel like they could control their experience tightly.” 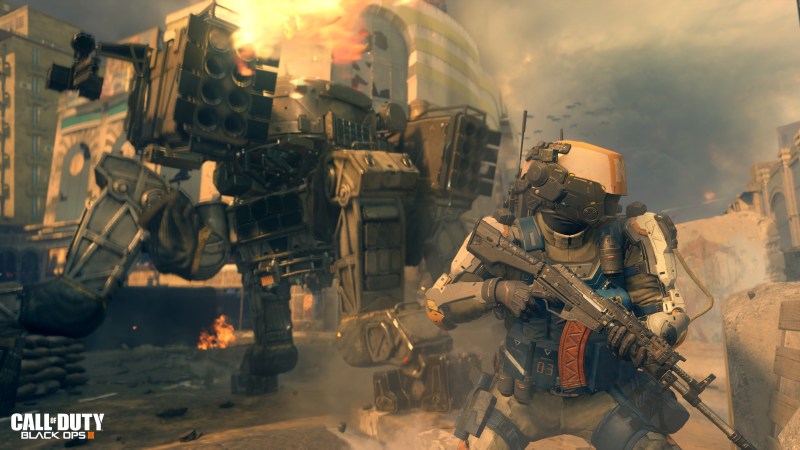 Above: The Ramses Station’s Quad Tank in Call of Duty: Black Ops III

And since Black Ops III is set in the year 2060, you have some superhuman abilities thanks to the marriage of human beings and cybernetics. Special boosters enhance how you move — and they help you get off the ground. And you can get around faster than is humanly possible because of the connection between your cyber-augmentations (such as artificial limbs) and your own nervous system. You are not wearing an “exo suit,” as you do in last year’s Call of Duty: Advanced Warfare. The combat suit is now wired into your brain.

In combat, that means you no longer have to climb up a ladder, as ladders suck, Vonderhaar said. Now, by doing a double tap on a button while running, you can just jump up to the second floor. And in the middle of a thrust-assisted jump, you can use another boost to reach something that you’re jumping for, like an open window. You can’t do this forever. A timer shows on the screen, and when it runs out, you have to recharge your thrust jump.

You no longer have a “dive to prone” move. That’s because it doesn’t fit with the “guns up” mantra. When you are diving, you can’t shoot. But you can now do a “power slide,” where you slip across the floor and can shoot at the same time. You can move and lower your profile as a target.

And Treyarch looked at what others are doing when it comes to multiplayer shooters. It added the ability to do a “wall run,” a feature introduced by rival Respawn Entertainment in its Titanfall game last year. If you run and jump at a wall at an angle, you can start running along the surface of the war. You can also chain these movements together, like moving from one wall run to another wall run by jumping in the midst of a wall run.

“It took months of iteration to get this one to feel the way it should,” Vonderhaar said.

On top of that, the team had to create new kinds of maps to enable wall running. Treyarch has always paid attention to the link between combat, movement, and map design in its Call of Duty games, Bunting said.

What’s more interesting about Black Ops III multiplayer, which I’ve played, is this ability to chain multiple movements together. If you can do a boost jump, change directions for that boost jump in mid-air, and move into a wall run, you’ll present a very difficult target to hit. While everyone can execute these moves, the people who master them can get a leg up on others.

“You learn these mechanics and piece them together in fun and interesting ways,” Bunting said.

Then there’s swimming. This is totally unrealistic, but it’s fun. You can now dive into the water and swim until your breath gives out. And underwater, you can shoot at enemies and kill them, regardless of which gun you’re using. That is one of the features that shouldn’t exist in a realistic game, but it exists in this one because it leads to a lot of deception and surprises, said Mark Lamia, head of Treyarch.

“This opens up what happens under the map,” said Vonderhaar. “It provides an entirely new playing surface to have a good fight in. It’s what you do with them altogether that makes the combat fluid and fast and visceral. And we call it the chain.” 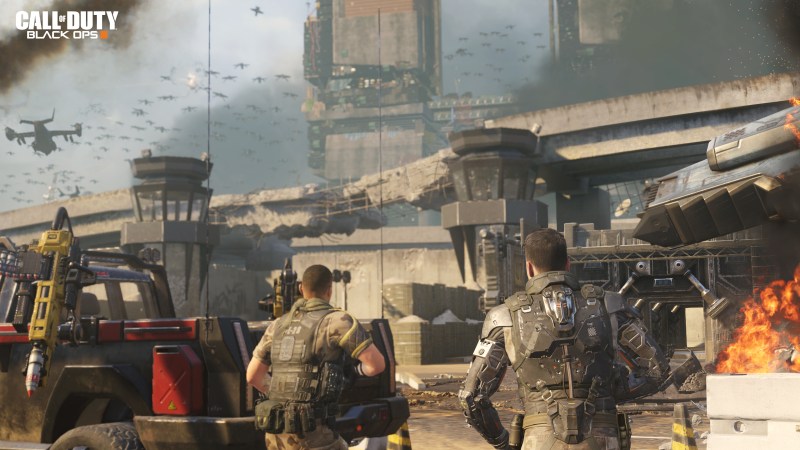 Above: The Ramses Station battle in Call of Duty: Black Ops III

You can have endless movement momentum even as you are firing. You can thrust jump into the air, do a complete turn, and land in a power slide while firing at someone who was chasing you.

“You have omni-directional movement,” Bunting said.

Showing off is a big part of multiplayer, and now you can do even more of that. You can craft your own emblems and add them to your firearm in a “gunsmith” feature. And now you can decorate the weapon to your heart’s content. You can level up your gun and then get new decals, like gold or diamond camos. You have three paintable sides on each weapon, and you can layer on 64 different layers per side.

Now you can attach five items to your gun, giving you more options to modify its performance.

“You can make your weapon your own and express yourself,” multiplayer director David Vonderhaar said.

And you can also play different classes of specialist characters. The Seraph has a giant high-caliber pistol that can fire penetration rounds. The Outrider has a bow with explosive-tipped arrows. The Ruin is a tank-like brute of a character who has an ax and “gravity spikes” that kill anyone nearby as the character slams the spikes into the ground. And it has an experimental combat robot, the Reaper, which has a minigun on his arm and can rewind time by a few seconds.

Activision is revealing four of the specialists today, but it will reveal five more later.

“It was truly 10 years in the making,” Bunting said. “We have our own brand of Black Ops multiplayer. We feel like this is Black Ops II evolved.”

I tried this multiplayer out. And at the Electronic Entertainment Expo (E3) show in June, players will be able to try out multiplayer as well.