Since it occurs in the year 2060, about 35 years after the previous game’s story, the single-player campaign of Call of Duty: Black Ops III is a new story that takes the franchise deeper into military science fiction.

The villain from the last game is a distant memory. And the creators of Black Ops III at Treyarch Studios have had the opportunity to conceive a new set of characters, landscapes, and weaponry to hold the fans of the franchise spellbound. Just about every soldier is going to be cybernetics-enhanced, like the old TV series, The Six Million Dollar Man, or Square Enix’s Deux Ex: Human Revolution video game. You can expect the campaign to fully explore the ethics of enhancing people with computers and other abilities.

Almost 100 million people have played the previous two games in the series, making Black Ops one of the most successful video game franchises of all time. Each of the previous games have generated more than $1 billion at retail, and they have done their part in making Call of Duty into a $10 billion franchise. Activision believes that it can still grow this franchise year after year, and that’s why it has three major studios, each taking their turn at a Call of Duty, working on the games.

Because three studios are working at once instead of the usual two, Treyarch got three years, not two, to make its latest game. The developers of Black Ops III are using that time to up the stakes in the single-player campaign, turning it into an optional one-player or four-player co-op experience. In co-op mode, players can play T-mode, which shares information about threats with other players. I saw the demo on both an Xbox One game console and a Windows PC.

“It”s a passionate fan base,” said studio head Mark Lamia in a presentation at Treyarch’s headquarters in Santa Monica, Calif. “We want to honor these folks, but bring our brand to many more. We had a blank canvas to look at for our next Black Ops game.”

The third time around

The first Black Ops game is set in the 1960s, focusing on the elite group of soldiers with access to secret weapons during the era of the Vietnam War. The second vaults ahead to 2025, when a villain named Raul Menendez hijacked a fleet of American drones and tried to start a world war between the U.S. and China.

That drone war and Menendez are now part of the Black Ops history, but Jason Blundell, the director of the single-player campaign at Treyarch and the game’s senior executive producer, said that the story has moved on. The world sought to prevent another drone war, so it created an umbrella air defense system that could take out unmanned aircraft and essentially neutralized air power among rival nations. The factions include the Winslow Accord and the Common Defense Pact.

“That returned the focus of combat to boots on the ground,” Blundell said.

Two factions are now fighting each other, the Common Defense Pact and the Black Ops soldiers. The Black Ops teams still fight with “full deniability,” tackling wars others cannot, Blundell said. Robotics has become pervasive, and so has “bio augmentation.” Soldiers who lost limbs in battle now have prosthetics, allowing them to return to active combat. Some have even volunteered to shed their arms and legs in exchange for better prosthetic attachments.

These soldiers have access to cutting-edge tech known as the Direct Neural Interface, or DNI, which connects a soldier’s retina and nervous system to their combat armor and weapons systems. This gives them both omnipresent, computer-connected battlefield awareness and instant combat reflexes. They wear body armor that explains why soldiers in Call of Duty can run so fast.

In this specific story, you play a member of a prototype Black Ops unit that has cybernetic enhancements. You are called upon to investigate the disappearance of a CIA team in Singapore, which has fallen off the grid. That disappearance is followed by the largest leak of military information in history, a parallel to the Wikileaks controversy.

“You have to uncover the truth,” Blundell said. “Your team members are off the grid, and that brings us to Cairo.”

The Ramses Station level in Cairo

Treyarch showed us a “prealpha” gameplay session as the team hunts for important assets who have “information on our lost brothers,” Blundell said. They’re in the midst of an attack by a group on Egypt’s military, and they surface at a place called Ramses Station during day four of a battle.

As your team enters the Egyptian military compound underground, an Egyptian soldier lays out the situation. His forces have less than 1,000 troops holding out against enemy robots.

The conversation references Menendez, who is castigated as an “hypocritical maniac” and a “prick who got what he deserved.” But another person notes that the air defense system, DEADS, is the only reason the military is still surviving.

The team goes into an interrogation room, and then it emerges to face the battlefield. Against the backdrop of war-torn Cairo, you see heavily armored enemies on the attack. These rolling balls appear and explode — a new kind of drone to control. You start firing at the enemy forces. You pick up a giant piece of metal and toss it, thanks to your cybernetic-enhanced body suit. Your team is called in to reinforce the Egyptian army’s Eastern checkpoint.

You remotely hijack a drone (yes, these things are still flying despite the aforementioned air defense system) and use it to attack the enemy’s robots from behind. For a time, you see the battle from the air using the drone’s camera, until the enemy takes out the drone. Then it returns to the Black Ops soldier’s view. You continue to shoot at the robots. You set off a huge explosion, and that closes out that section of the battle and you receive an after-action report.

For the first time, players can play the full campaign cooperatively with three other players. The levels have been designed with four players in mind. That means that, if you play them as a single player, they may prove to be difficult.

Black Ops III has a new graphics engine and large combat environments. The graphics look great in the Ramses Station scene with all of the special effects such as smoke, fire, shadowy lighting. It definitely makes use of next-generation hardware such as the Xbox One, PlayStation 4, and it will look even better on the PC with 4K displays.

Battlefields have multiple paths, allowing you to choose your own route through the mission. It has different ways in which you can fight, and that makes each mission replayable. Under these conditions, the artificial intelligence of the enemies has to be more emergent and flexible, Blundell said. The team at Treyarch completely overhauled its A.I. and created a new animation system, supporting more than 20 different emergent combos that challenge players in a variety of ways.

The A.I has to coordinate with each unit it controls and group its soldiers and robots into formations or columns. This results in a more open-ended Call of Duty, as the developers have taken advantage of more powerful consoles and PCs to create larger landscapes in the game. But it still has what they call “pillars of cinematic intensity.” For instance, one of the playable soldiers may move to defuse a bomb. The other three players will watch that action from the third-person point of view. The main player will see the cinematic from first-person, while at some point, all of the players will see a common cinematic that gives everyone a sense of being at the center of a drama, Blundell said. 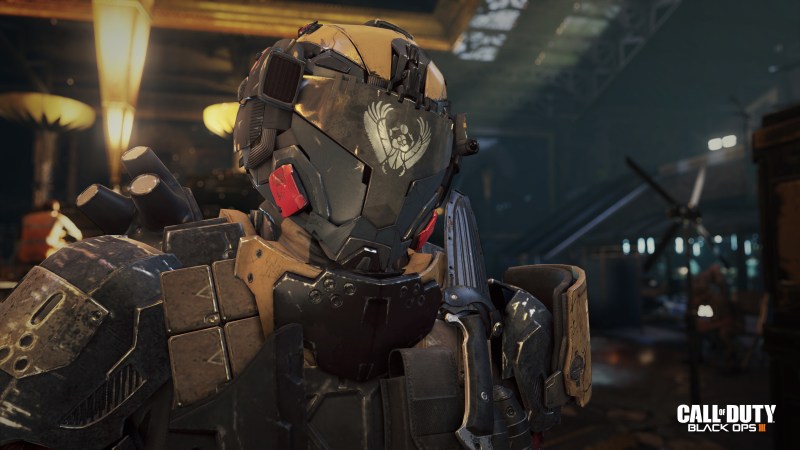 Above: An armored soldier in Call of Duty: Black Ops III.

Black Ops III has all of the things a Call of Duty game should have, Blundell said, like “soldier customization, cinematic intensity, epic action, gritty narrative, off-the-rails play, open-area battles, and replayability.”

Soldiers can link to each other via the DNI so they can see what another soldier is seeing. A heads-up display tells you about the threats on a battlefield, even if some of those are hidden from your view on the other side of a wall. You can use up to 40 different “cyber-cores and cyber-rigs,” or modifications which you can acquire as special abilities during the campaign. Then you can choose which ones you will use — from remote hacking to chain melee strikes — in any given mission.

The capability to hijack and remotely hack a vehicle like a drone is “level agnostic.” It has new weapons such as fireflies, which you can fire at an enemy and set them on fire.

You’ll be able to return to a safe house in mission areas where you can customize, upgrade, and socialize with other players. You can read information that gives you more backstory to what’s happening. The campaign itself takes place over the course of a week, so it’s a much tighter experience than previous games, Blundell said.

“Overlaying the campaign, you have an online presence in every part of the game,” Lamia said.

I’m waiting to see more about the plot and characters, as Treyarch hasn’t said much about them yet. But the single-player campaign looks very interesting indeed.

Above: A character named Hendricks in Call of Duty: Black Ops III