I think we can all agree that being locked into a carrier contract simply to get a halfway affordable price on a smartphone is a lousy system. Moreover, owning the phone that goes along with such an, ahem, bargain can be frustrating later on, even after your contract period has expired and you discover that it isn’t so easy to just up and leave — the damn thing’s been locked to your current carrier!

How about this instead: $249 for a 5.5″ full-HD, LTE, 16 GB Android-L powered smartphone with a 13MP rear-facing cam and sound system by JBL? Right — now we’re talking. In fact, we’re talking about the Alcatel OneTouch Idol 3, which goes on sale today. The Idol 3 joins the ranks of well-equipped unlocked phones like the $298 OnePlus One  and the $206 BLU Studio 6.0, both of which attempt to offer a full-featured smartphone experience at a reasonable price.

At this, the Alcatel OneTouch Idol 3 succeeds — quite handily, I might add. 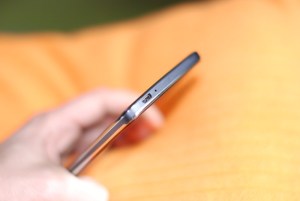 Above: The Alcatel OneTouch Idol 3 is almost as thin as an iPhone 6 Plus. Photo by Simon Cohen.

Despite its attention-seeking name, the Idol 3 has a sophisticated, understated design that has an all-screen look on the front with a barely discernable bezel. Flip it over and you’ll find a dark-gray anthracite back plate with a pseudo-brushed metal look to it. It’s not as convincing as the LG G3, but it still looks plenty sharp. I’m not a fan of the “idol” word-mark logo, but it’s small and subtle enough that you likely won’t find it offensive. 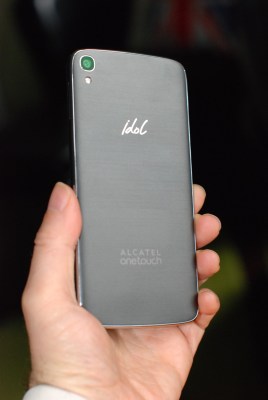 Above: The back of the Idol 3 is sophisticated — even with the Idol logo. Photo by Simon Cohen.

The entire body is trimmed in a chrome-black-chrome stripe that wraps around the edges, which are gently rounded. The overall impression is of quality materials and solid if not breathtaking design. But what I really liked is its weight. I’ve never been into the big-phone/phablet thing (probably because of my childishly small hands) and have been irked just as much by their weight as by their size. The iPhone 6 Plus, which has the same screen size (and resolution!) as the Idol 3, weighs 172 grams. I think my puny muscles can handle that, but then, when you consider that the Idol 3 weighs in at 140.7 grams, you realize that a big phone doesn’t have to feel like one. At 7.4mm thick, it’s incredibly thin too — just 0.3mm thicker than the 6 Plus.

Alcatel has given the Idol 3 a symmetrical layout top-to-bottom thanks to the placement of the front-facing stereo speakers. Cleverly, this isn’t just for better audio: A unique trick that you can do with this phone is disregard which way is up. The display and the microphone/speaker arrangement are completely reversible. Got an incoming call? Just grab the phone. You may have trouble locating the volume rocker, but that’s a small price to pay for this level of flexibility. I’m surprised no other manufacturer has thought to do this. 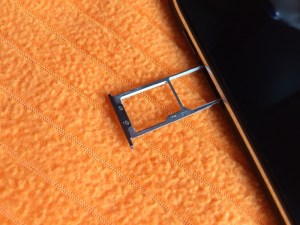 Above: The dual SIM/SD card tray keeps the rest of the phone uncluttered. Photo by Simon Cohen.

And while I know it’s not a big deal, I’m still impressed by the phone’s dual micro-SIM/microSD card tray. It’s a smart way to keep ports/slots on a phone to a minimum while offering maximum versatility. Besides, given the phone’s base storage of 16GB (10GB usable), you’re going to need extra storage fairly quickly. 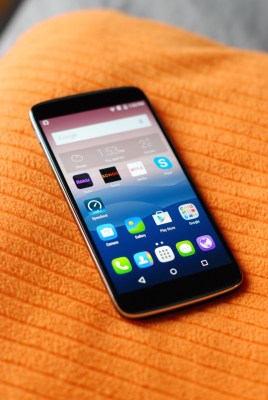 Above: The Idol 3’s 5.5″ Full HD screen is one of its best features. Photo by Simon Cohen.

As I mentioned, the Idol 3 essentially has the same screen specs as an iPhone 6 Plus, at 1920×1080 with a 5.5″ diagonal. No, the screen doesn’t look as good as an iPhone, but it comes so close, you probably won’t care. Text and graphics are very sharp, and colors feel vibrant without burning out your retinas. Off-angle viewing isn’t as perfect as phones equipped with IPS screens, but it’s still damn good.

If there’s one thing I can say for big phones, it’s that videos look great. The Idol 3 makes for an ideal video player, whether it’s streaming the banal rantings of your teen’s favorite YouTuber or the BBC’s Planet Earth series in HD from Netflix. The blacks, while not as inky as on a Samsung Galaxy, are still deep enough that space scenes don’t look like they’ve been passed through an Instagram filter. Alcatel claims that Technicolor (the company that gets the credit at the end of almost every movie) has tuned the screen’s attributes, so maybe this explains it. Or not. We’ll never know what the screen would have looked like without it. 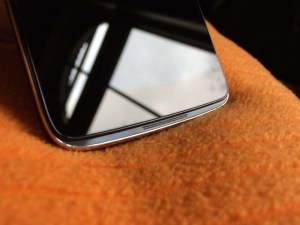 Above: The Idol 3’s front-facing speakers sound very good — a rarity in the smartphone world. Photo by Simon Cohen.

Speaking of watching movies, if there’s been one complaint I’ve consistently had about almost every phone I’ve tried out — even the ones that boast sound technologies like Beats or Dolby — it’s the sound quality of the built-in speakers. Maybe I shouldn’t have such high expectations. After all, it’s a phone, not a hi-fi system. But still, why so many sound so awful is beyond me. The OneTouch Idol 3 seems to be a rare exception in that it sports one of those brand-enhanced labels (JBL) — so I was prepared to be disappointed — and yet it sounds good! Not “Oh my god I can’t believe it’s a phone!” good, but more like “Y’know, I could totally watch a whole movie and not be totally annoyed by it” good, which is, well, good!

Just in case you use your phone for actual phone calls, you’ll appreciate knowing that call quality was very good, and that those dual speakers make for excellent hands-free volume levels. 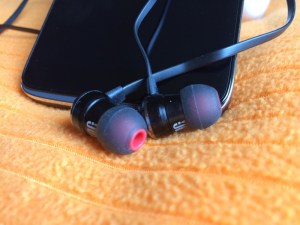 Above: The included JBL earbuds are so good you’ll actually want to use them, not discard them. Photo by Simon Cohen.

I’m going to pause here on the whole audio theme to tell you something else that frankly surprised the shit out of me. Earbuds. The ones that ship with most phones (assuming they ship with any at all) usually aren’t worth the plastic they’re molded from. I almost never unpack them, because why bother? The JBL-branded noise-isolating ones that come with the Idol 3, on the other hand, are shockingly good. They won’t necessarily impress audiophiles, but they are a lot better than Apple’s Earpods, substantially better than the pair of Sennheiser CX 300s I have lying around — heck, they even sound better than a custom pair of Sculpted Eers. They’re comfortable too. Are they a reason to buy the Idol 3? No, but it’s nice to know that you won’t be throwing these earbuds away at the first opportunity (or if you decide to, LMK — I’ll send you my mailing address). 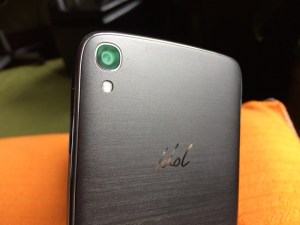 Above: The OneTouch Idol 3’s 13MP rear camera is made by Sony, but lacks the sharpness found on other phones. Photo by Simon Cohen.

It would be reasonable to ask yourself what you’ll be giving up by only paying $249 for a phone when others on the market cost so much more. With the Idol 3, the performance certainly hasn’t been compromised. The lightly customized version of Android L it runs is snappy and responsive. You can flick through screens with zero lag, and apps launch in the blink of an eye. Games performed very well, as did streaming video. Even some choppiness of audio I’ve noticed on some racing games like Raging Thunder 2 wasn’t discernable on the Idol 3. It’s mostly a testament to just how good the onboard Qualcomm Snapdragon 615 processor is.

If I can find a weakness with the Idol 3 — and I’ve had to look pretty hard to find one — it’s the camera. Alcatel touts that it’s made by Sony and has a 13-megapixel resolution, but this is simply more proof that megapixels are irrelevant to photo quality. Under close comparison with photos taken with a Nexus 5 (an 8MP camera) you can see that the Nexus outperforms the Idol 3 in terms of sharpness both indoors and outside. It’s not a deal-breaker — the Idol 3’s photos are plenty good enough (especially if you’ll be running them through the inevitable filters of Instagram) — but I think it’s safe to say this is one of the components that Alcatel saved some money on. 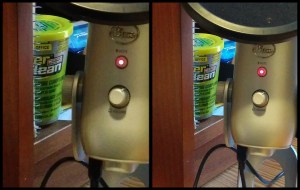 Above: Sample of indoor photography. Idol 3 on the left, Nexus 5 on the right. The Idol 3 doesn’t capture as much detail. Photos by Simon Cohen. (click for larger size) 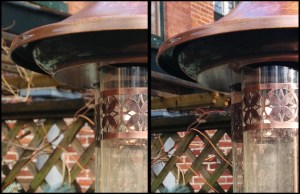 Above: Even outdoors with lots of natural light, the Idol 3 (left) underperforms against the Nexus 5 (right). Photos by Simon Cohen. (click for larger size)

As far as battery life goes, this was another pleasant surprise. With a 2910 mAh power pack (just 5 mAh less than the iPhone 6 Plus), Alcatel claims you’ll get 13 hours of talk time or 600 hours of standby. I did not put this to the full test, but I can say that even with heavier use than I would normally subject a phone to on a daily basis, I was able to get a day and half out of the Idol 3, even with the screen timeout set to 2 minutes instead of the default 30 seconds. In a phone as light as the Idol 3, this is as good as one can expect with the current state of battery tech. 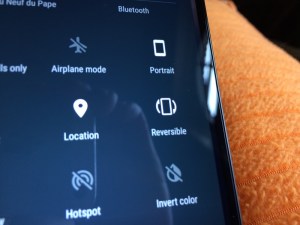 Above: The OneTouch Idol 3 is completely reversible, though this feature can be turned off if it turns you off. Photo by Simon Cohen.

The Alcatel OneTouch Idol 3 is blissfully unencumbered by the bloatware you’ll find on so many Android devices. It’s essentially vanilla Android L, but with some cosmetic changes such as a custom set of icons. These you may love or hate, but I thought they were simply and friendly. Unlike Samsung, Apple and other manufacturers, Alcatel has chosen not to package the Idol 3 with extra add-ons like Health apps. Does this matter? Personally, I say no. If I ever want to track my fitness with my phone, I’ll go find an app that does it. Likewise for the many other “utilities” that ship with other handsets. Unfortunately the one custom app that Alcatel does provide – a combo music player/audio mixer called OneTouch Mix – crashed on me continuously. I suspect this is merely a glitch in the software – my review unit was a pre-production model.

With its big, beautiful 5.5″ screen, excellent sound quality, snappy performance, and surprisingly good earbuds, the Alcatel OneTouch Idol 3 would be a great choice for someone looking for a new large-format smartphone on a contract. The fact that it’s only $249, contract-free, and unlocked makes it a superb value that is easy to recommend to any prospective buyer.

Though its camera may not be the equivalent of high-end products like the iPhone or Galaxy S6, and it lacks features like a built in health app or fingerprint reader, this is a small price to pay for the Idol 3’s small (relatively speaking) cost and wide-open carrier compatibility.

If you’re in the market for a new phone and you’ve been sizing up phablets like the iPhone 6 Plus, you owe it to yourself to take a close look at the Alcatel OneTouch Idol 3.