Shay and Vella have been waiting 15 months to continue their story.

Developer Double Fine Productions left the stars of Broken Age, its newest adventure game, bewildered after a climactic finale in Act 1. But at the time of Act 1’s release in Jan. 2014, the developers didn’t have a follow-up. They needed another year to work on their project.

In Act 1, we met reluctant heroes Shay Volta (voiced by actor Elijah Wood) and Vella Tartine (portrayed by Masasa Moyo). Their lives couldn’t be more different. Shay grew up on a spaceship while Vella is from a sleepy coastal town. The one thing they do have in common is the lack of control over their destinies. Shay is on a mission to save his dying planet, but he’s stuck doing the same mundane tasks over and over. Village traditions dictate that Vella has to sacrifice herself to a giant monster to save her town, but she’d rather fight it. Players can switch between their stories at any time.

When I reviewed Act 1, I thought the cliffhanger was too abrupt. It was as if Double Fine shoved that in there just to tease the next part. Playing through it again confirmed my assumption: Broken Age works much better as a cohesive piece. Act 2 picks up after the first act’s finale, where Shay and Vella must continue to push on despite being in unfamiliar territory. The dialogue is still incredibly funny, and the new characters (and revelations about old ones) take Broken Age’s world into strange but hilarious directions. 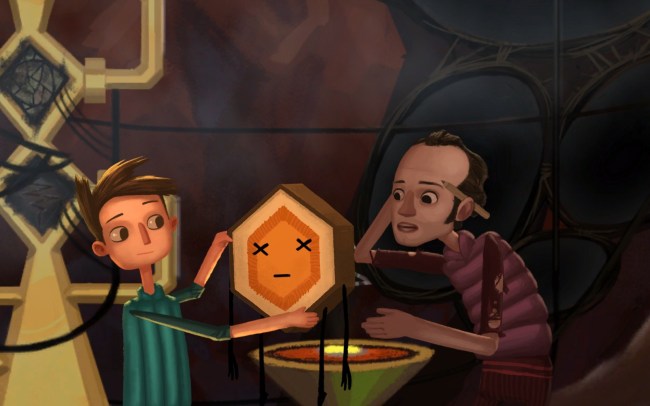 Shay and Vella dealing with the fallout

Act 2 doesn’t dwell too long on its serious moments, but it does recognize the wide-reaching effect that Act 1’s events had on the world. The kids handle it the best way they know how: through humor. Shay maintains his childlike curiosity, occasionally poking fun at things that seem out of place or weird to him. Vella’s deadpan observations are perfect for the absurdities she faces in her new environment.

They don’t spend too much time in deep thought, either. They’re far too busy with their quests. But I liked hearing the introspection in their dialogue. It made them appear more relatable.

Revisiting the areas from Act 1

Act 2 is short on new areas, so you’ll spend most of your time retreading familiar ground. That might sound like a big problem, but I didn’t mind it. All the people you met in Act 1 are back, albeit in different situations. It was fun to see certain characters finally cross paths. Best of all, my favorites — the fruit-obsessed Gus (played by Adventure Time creator Pendleton Ward) and hipster lumberjack Curtis (voiced by Wil Wheaton) — return with new jokes and ridiculous schemes.

You’ll definitely want to talk to everyone again. I dragged items from my inventory and dropped them on different characters just to hear what they would say (even if I knew those objects didn’t belong to them). 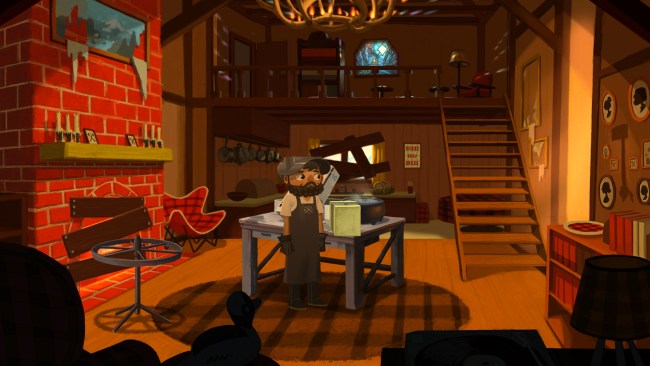 Above: Curtis is up to something.

Puzzle solutions that rely on both worlds

Broken Age’s puzzles consist of finding items in the world and either giving them to people or placing them on other objects. Sometimes, you have to combine these items with each other. The puzzles weren’t that hard to solve in Act 1, but for Act 2, Double Fine ramped up the difficulty. I felt like I had to use more items than last time. Shay must’ve walked at least 50 miles as I moved back and forth between the towns (much more than I did with Vella). His to-do list was pretty long. I spoke with a bunch of people to get clues and objects. Vella doesn’t have as much room to explore, but her tasks require a lot of legwork as well.

Some of these puzzles do something new. To solve them, you have to pay attention to specific details from both worlds. Minor things that have no effect on Shay’s side might be just the hints you need to complete something with Vella (and vice-versa). You can’t transfer items over from one character to the next, but you can quickly switch between their stories by using a button in your inventory screen. The only way to get all the clues is by flipping back and forth between the characters. You’ll hear verbal cues to let you know you’re dealing with these puzzles like, “I wonder what so-and-so would think of this.”

I became a little paranoid of missing any crucial details, so I took screenshots of anything that seemed important. I frequently used Alt-Tab to switch between the game and the screenshots folder on my PC when trying to solve something. One puzzle in particular made me frustrated. I quit the game and browsed my screenshots to make sure they came out OK. That’s when I saw the solution — right there, on the first screen, staring at my big dumb face. I’m not sure how I missed it.

Drawing on your expertise from both worlds is a cool and inventive way of incorporating Broken Age’s dual-story premise into its mechanics. I felt like an active participant in Shay’s and Vella’s adventures, like some kind of invisible messenger that could cross great distances to help them. 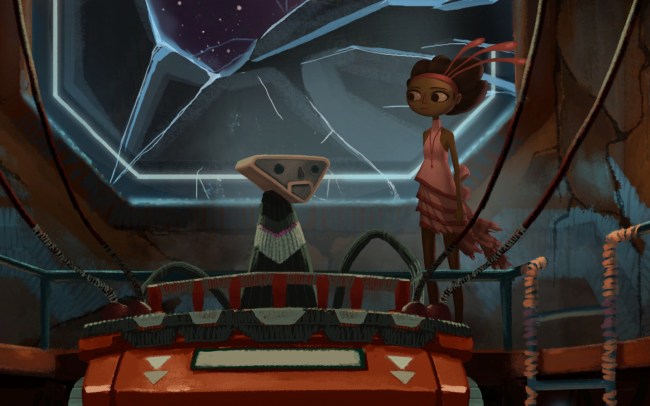 Above: Vella’s not sure what to make of the ship’s navigator.

I liked Broken Age’s ending, but it still left me with unanswered questions. Most of them concern a new area we get to visit. But whether it was for budgetary reasons or because the designers never intended for players to explore it, Shay and Vella don’t spend a lot of time there. This leaves parts of the story a bit vague by the time you see the credits.

It’s weird though. In Act 2, characters go into impressive detail about what’s really happening, but they stop short of explaining what I consider key plot points. I understand wanting to leave a little mystery, so players can make their own interpretations. But if you’re going to tell us certain things anyway, why not go all the way?

Shay’s and Vella’s animations can look a little funky. When talking to people, I noticed impossibly quick transitions from one pose to the next. For instance, when Vella was thinking hard about something, she crossed her arms with one hand touching her chin. A split-second later, her body convulsed and her arms quickly fell down to her side. These jerky movements don’t happen very often, but hopefully, they’ll go away in a future update. 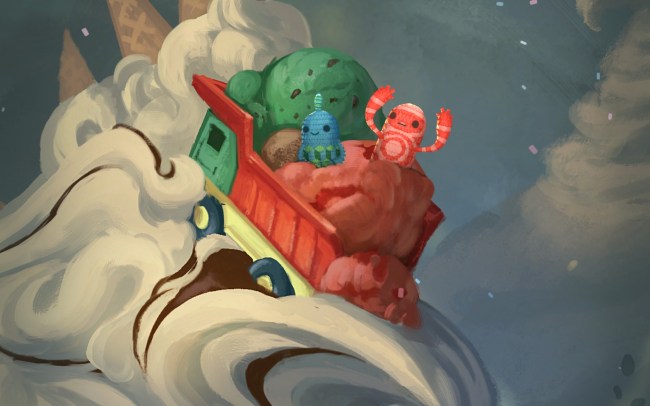 Above: It’s hard to show Act 2 without spoiling something, so here’s a pic of some yarn pals.

Act 1 was just an appetizer. Act 2 is the meaty main course that defines Broken Age — and not just because it finishes the story. It’s where Double Fine let loose and went crazy with the puzzles (and the complex train of thought you need to solve them). It’s where characters I previously thought were only there for a joke or two became much more important. It’s where Shay’s and Vella’s rebellion against their preordained fates turned into a cause that is much bigger than themselves.

I would’ve liked more information about the story, but when I reached the ending, any problems I had slipped away. All I wanted to do was hug somebody.

Broken Age (along with its new Act 2 chapter) releases on April 28 for PlayStation 4, PlayStation Vita, PC, Mac, Linux, iOS, Android, and Ouya. The developer provided GamesBeat with a PC code for the purpose of this review.