You’ll have time for this Watch role-playing game.

Everywear Games, a new developer made up of former Rovio (Angry Birds) and Remedy (Alan Wake) team members, took on the challenge of adapting fantasy role-playing to the Apple Watch last year. Role-playing games are known for being lengthy time-sinks, even on mobile devices, so the company had to distill core concepts down to something that players could enjoy on a tiny screen, in short play sessions. The team had to push through size constraints, battery limitations, and limited development tools to do so, but it managed to launch Runeblade last week, just in time for the release of the Apple Watch.

For as small as it is, Runeblade has everything you’d expect: monsters, spells, swords, and quests, all on the back of your wrist. GamesBeat spoke with Everywear Games founder and CEO Aki Järvilehto on how his team had to retool the role-playing genre to work on a watch.

Everywear is excited about and fully committed to smartwatch gaming, and believes that the platform will grow much like mobile did, says Järvilehto. Runeblade is just the start for this new developer.

“As far as I know, we’re the first game developer in the world to fully focus on smartwatch gaming,” Järvilehto told GamesBeat in an interview. “April 2015 is the beginning of real smartwatch games, and Apple Watch is the most exciting game platform of this year. It’s an amazing opportunity to be on the ground floor of smartwatch game development. We have a brand new Apple platform, and with that comes the potential to launch out of the gate with the best games for it. It couldn’t be a more exciting time.”

Above: A selection of Apple Watch screenshots from Runeblade

Runeblade has the player taking up the role of a champion of the War Mages, out on a journey to take on ancient awakening gods that plan to ruin the world. It’s a typical story for this kind of game, though the role-playing systems expected to go alongside this kind of tale have been smartly simplified for the platform.

“With Runeblade, we set out to do something that hasn’t been done before,” Järvilehto said. “We wanted to create a world with all the classic elements of high fantasy, while tailoring it specifically for smartwatch gameplay.”

While the core gameplay takes place on the watch, a companion iPhone client will feature game support elements. For example, the phone houses the game’s hometown, where a library and magic shop can be found to support the watch game.

“While the setting is very ambitious in the context of gaming on Apple Watch, we’ve radically simplified the gameplay itself,” Järvilehto said. “Game sessions last 5-15 seconds, and fighting monsters happens with single-click ease. Every now and then you’ll want to log in to the iPhone client to enchant your Runeblade and cast a spell or two.” 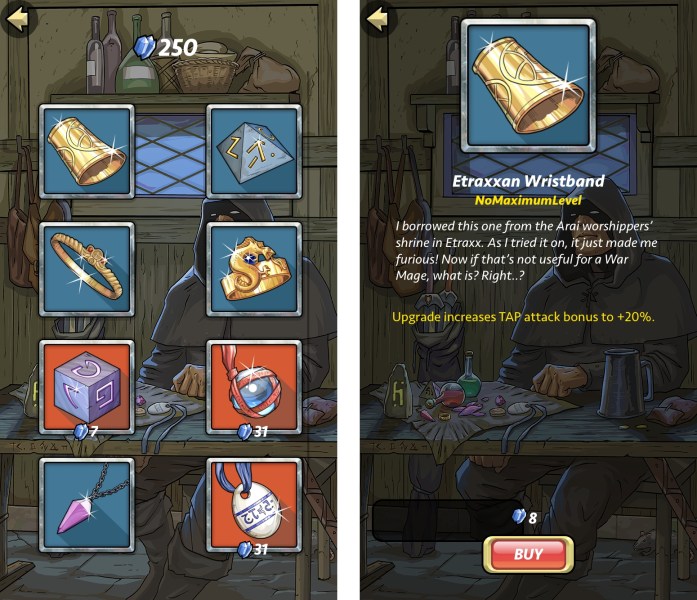 Järvilehto explains that “Twitter-sized” entertainment was the goal for Runeblade, which helped the developer decide on these 15-second play sessions. He says that Apple Watch is an ideal platform for short bursts of gaming, and all smartwatch games should keep sessions brief.

Even with its short play sessions, Järvilehto says it all adds up to a bigger overall experience for Runeblade.

“The key to Runeblade really is how the game experience builds over time from these ultra-short sessions,” he says. “Later in the game, you start to gain magical artifacts, and together with spells and runes, these add a lot of strategic and tactical elements to the gameplay.”

Everywear could build on Runeblade in the future. But for now, it’s a free-to-play title. Järvilehto says that it’s still too early to know what monetizing a free-to-play Apple Watch game would look like, but the company could add the ability to purchase currencies at a later date.

For the development of Runeblade, Järvilehto says that the change in mindset was a bigger challenge than the Apple Watch’s small form factor or device limitations.

“From the development point of view, the biggest change is without a doubt a change in the mindset,” he said. “Smartwatch games will have to integrate into our lives smoothly. They need to feel effortless and fun to play. And that’s a radical change and a completely new question to answer: how do you deliver fun in 5-15 seconds? How do you deliver a gameplay experience that evolved over days, weeks, and months?” 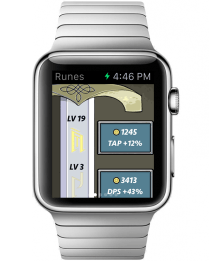 Above: Runeblade’s leveling system lets you use loot to level up your attacks.

Ease of access is a key advantage for the Apple Watch over mobile devices when it comes to games like Runeblade, says Järvilehto. Simply turning up your wrist is so much easier than pulling out your phone. Shorter, more accessible sessions could do a better job of keep players engaged.

“Speed of access is one of the key advantages,” he says. “You couldn’t do game designs which target ultra-short gameplay sessions on a mobile phone or tablet. Simply taking your phone from your pocket, unlocking it, finding the right game and booting it up takes too much time for it to be fun if the gameplay is so short.”

Järvilehto says that Everywear is enjoying the challenge of developing for a new platform, and that the company is excited for Apple Watch’s future. He thinks that, just as with the mobile space, games will continue to evolve and surprise as the user base grows.

“I think a lot of people are going to be surprised already in the next few weeks, Järvilehto said. “There are a lot of different game designs which will work very well in smartwatches, and Runeblade is just a start. It took a while for developers and people in general to get serious with mobile games. I think we’re going to see something similar with smartwatch gaming as more consumers adopt the hardware.”