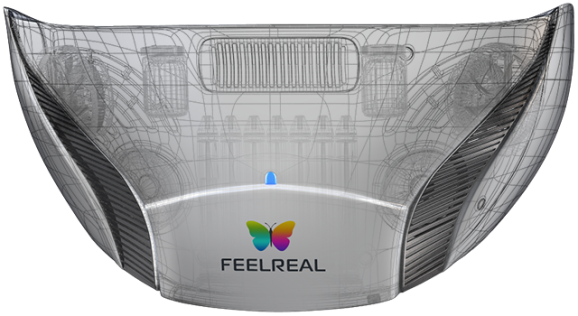 Your nose goes in there somewhere

Virtual reality could get a bit more real — and smellier.

At least that’s what the people behind the Feelreal VR Mask think. Their gadget attaches to the bottom of headsets like the Oculus Rift and adds other sensory experiences, like hot and cold air, water mist, and — yes — smells. Feelreal is also making a helmet, called Nirvana, which can fit the VR Mask and a smartphone. Both projects seek funding together on Feelreal’s Kickstarter, which is looking for $50,000.

Still, if you’re like me, you’re really curious about that whole Smell-O-Vision thing.

“With the help of professional perfumers, we developed an odor generator with seven removable smell cartridges that adds the scents to certain scenery by vaporizing a mixture of aromatic substances and that can be easily changed depending on the game or movie you’re playing or watching,” Feelreal wrote on its Kickstarter page.

So, maybe we could play The Elder Scrolls V: Skyrim and finally discover what a dragon smells like. Or maybe we could get a whiff of beer and a roaring fireplace while playing Hearthstone: Heroes of Warcraft. I wonder if any of those odor cartridges can replicate the smell of human blood. That might be a necessity in this modern, violent age of gaming.