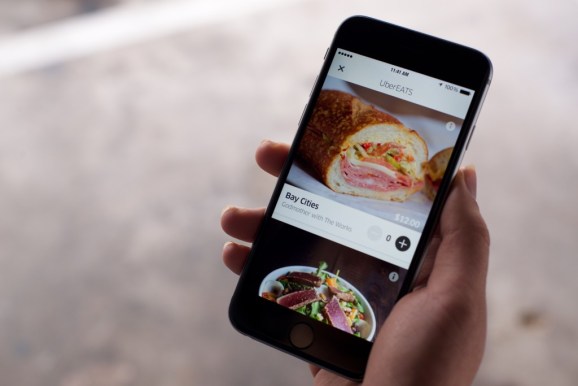 Launching initially as “UberFresh” in Los Angeles, the company took the rebranded service international with the roll-out in the Spanish metropolis of Barcelona back in February.

UberEats lets you order meals from within the main Uber app, which spares users a separate download. Also, Uber directly curates the menu itself from a range of local eateries, with the offerings changing every day. The option to order UberEats only shows up when you’re in a coverage area. For now, this is pretty limited within Manhattan, as you can see from the N.Y.C. coverage map — and it’s only open for lunchtime diners, with service available 11 a.m. to 2 p.m., Monday to Friday.

With this hyperlocal, curated approach, Uber isn’t (currently) trying to compete directly with the likes of GrubHub and others operating in what has become a crowded space. While Uber is certainly encroaching on their territory, the limited options and availability means that the food-aggregator incumbents can rest easy — for now.

Also, the dedicated UberEats drivers don’t deliver the food to your house or office; meals are dispatched to the curbside. So this is more about food you can eat on the move, as evidenced by some of the items available in N.Y.C. this week: a “sandwich from American Cut, Kale Caesar salad from sweetgreen, steak sandwich from Num Pang.”

Flush with cash, Uber has taken the transit world by storm with its user-friendly app that lets anyone beckon a car with a few taps. But the transport service has increasingly been looking to spread its wings into other verticals, and food-delivery clearly fits the bill.

This isn’t Uber’s first foray into delivery services in the Big Apple — last year it announced UberRush, an on-demand courier service in Manhattan that lets users request items to be collected and delivered via an app. Today’s move fits into Uber’s broader vision of becoming a ubiquitous transport-oriented service that can be used for a multitude of use cases.