The wordplay comes easily when a game called Mr Jump rises up a list.

That new iOS game debuted at No. 2 on App Annie’s list of most downloaded iOS games worldwide in March. Dare I say that it “jumped” up there? It was only behind King’s popular puzzle game Candy Crush Soda Saga. This makes it a big success story in a mobile market that could reach $30 billion and exceed the console industry’s revenues this year, according to market researcher Newzoo.

“Unlike so­-called ‘endless’ runners, Mr Jump presents players with 12 distinct levels to jump through,” App Annie noted in its report. “Beating one level unlocks the next, although players can purchase keys to unlock the next level via in-­app purchases.”

You can see the rest of App Annie’s list below. 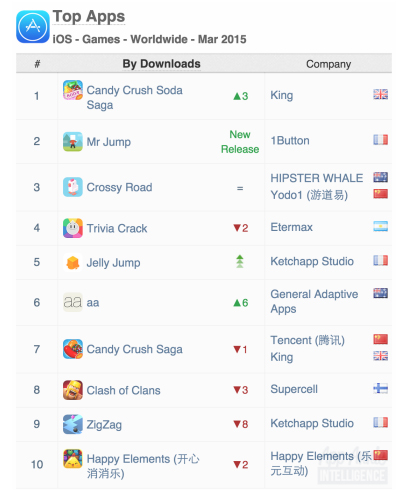 Notably, puzzle game Aa, which originally came out last August, has climbed up the charts to the No. 6 spot. The endless-jumper Jelly Jump also (again, forgive me) jumped up the charts to No. 5. App Annie categorizes games like Aa and Mr Jump as super casual, which means they only involve one input (a simple finger tap).

“App Annie reported that, in 2014, one or more ‘super-casual’ games were in the top 10 monthly charts 10 months out of 12,” said Stewart Rogers, analyst at VB Insight. “In addition to that success stirring the pot for other game developers, these titles lend themselves to the best performing monetization strategies detailed in John Koetsier’s recent Mobile Games Monetization study, such as in-app progress purchases.”

“Companies of all sizes are driving the popularity of super casual games,” App Annie noted. “The genre is simple enough for smaller companies to release quickly, while large companies can afford to plant dozens of super casual seeds to increase the chance of landing a viral hit. Thus, the genre continues to see strong growth. For the first time since Flappy Bird left its mark, half the games on the iOS Downloads rankings were super casual games.”