A town whose cultish fanaticism has led to otherworldly creatures bleeding into their reality.

A world inundated with perverse monstrosities and mutated humanity, terrible to behold but still too enticing to resist getting a closer look — this is Yharnam. This is also Silent Hill.

With news of the Hideo Kojima-Guillermo del Toro horror collaboration’s cancellation, gamers have feared that their macabre escapisms would heretofore go unfulfilled. It’s a silly notion, because in Bloodborne, we just played the best Silent Hills we were going to get. 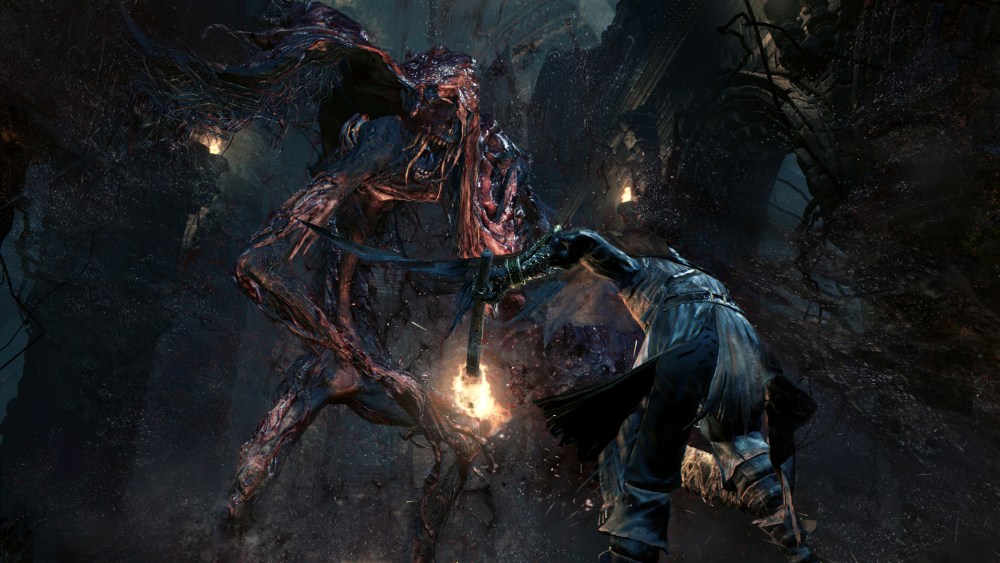 Above: The blood-starved beast is a creature that would thrive in Silent Hill just as much as it does in Yharnam.

A central, psychological paradox best unites Bloodborne (and its Souls predecessors) with the Silent Hill series. In both experiences, you enter head-first into demented realms of disgusting abominations and off-putting NPCs. Humans that somehow comfortably survive in between monster-filled courtyards give cryptic exposition, and every new area brings new, grotesque threats. It doesn’t take long for players to innately mistrust everyone they meet and to begin expecting unexplainable horrors around every corner. And yet, in both Souls and Hills, we eagerly press forward.

The designers of Silent Hill put this seeming contraction into a digestible design phrase: simultaneous attraction and repulsion. The idea is to present just enough recognizable imagery within a creature or level for players to relate to and want to explore, and then twist and warp it enough to strip away any sense of ease. Enemies in both From Software and Team Silent’s creations embody this principle perfectly.

We first meet the watery student creatures of Bloodborne’s Lecture Building, for example, as comical blobs with graduation caps on their gelatinous scalps. But as their viscous bodies slurp together into a singular mass flailing toward you, the individual death masks that act as their faces blur into an unsettling mess. The baby-faced Twin Victim creature of Silent Hill 4 is a similar construct: two sleeping infant masks stuck atop a dirty smock, propped up by two large arms. Hideous to look at, but falling into a familiar kind of toddler tantrum on the ground when attacked.

In an age of postapocalypse simulators set in generic forests and drowning in zombies, both the Bloodborne/Souls and Silent Hill sagas endeavor to evoke shared imagery of historical periods (Victorian England and late 20th century Americana, respectfully) to draw players in before letting hell loose upon them. We revel in the horror of watching the blood moon corrupt cobblestone streets in the same way we shiver at the air raid siren triggering a resort town’s hellish underside. Like with their enemy design, Bloodborne and Silent Hill excel at trapping us in the familiar but melting it away and revealing the terrors beneath.

The downside to archaic devotions 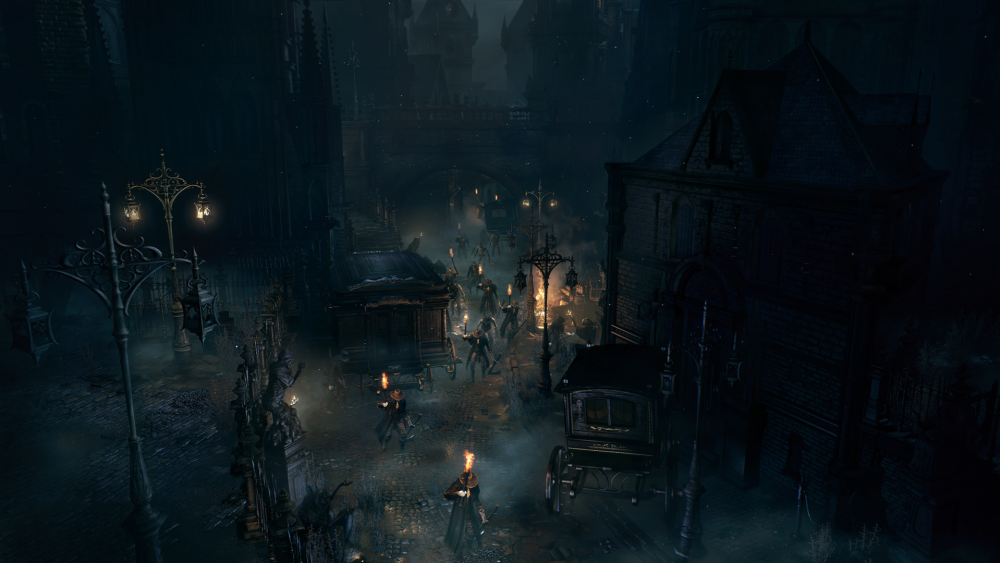 Above: The denizens of Yharnam have a feverish fanaticism not unlike members of Silent Hill’s Order.

But all of that was part of From Software’s design years before Bloodborne, I hear you say. True, and while Bloodborne is the ultimate refinement of those mechanics, it is in its narrative that this game best ties to Silent Hill. Particularly the cult-heavy tales weaved by Silent Hill 1, 3, 4, and Homecoming.

By the time we as players enter into the worlds of Yharnam and Silent Hill, the majority of the town residents are generations-deep in the worship of unspeakable entities. Bloodborne prefers a more cosmic horror to Silent Hill’s mis-mash of “pagan” dieties, but the results of their devotion are ultimately the same. Both populations seek to be closer to their believed gods, and through their church perform sacrifices to bring these paranormal beings into the version of the world they inhabit. Silent Hill parishioners prefer killing children, while Yharnam-ites (Yharnamians? Yharnamis?) go for ingesting the blood of their sacred Old Ones.

As a player, we are always experiencing the end results of these devotionals. We have never visited a Silent Hill that isn’t stained by the horrific actions of the town’s various Orders, just like we never see Yharnam before the beginnings of the Healing Church and the ritual Hunt. Our characters frequently factor into these sacrifices, either as the lasting offering to a creature of inconceivable power or a vessel for the birth of a new one of them.

We absorb these tales of ritualistic hubris similiarly as well. Dubious NPCs deliver narrative keywords in vague monologues, and item descriptions often add more flavor to the world we are in than cutscenes. It all leads us, in both cases, to multiple possible endings largely differentiated between purposefully innocuous-looking items discovered and used by the player in the course of their play through. I spent the same amount of time hunting for Bloodborne’s three pieces of the umbilical cord as I did the components of Silent Hill 2’s ritual ending. Both times, I was helped by the exhaustive and enthusiastic research of the game’s fanbase, each eagerly piecing together whatever details they could with a passion that puts Five Nights at Freddy’s fans to shame.

A Silent Hills is spirit, tone, and detail 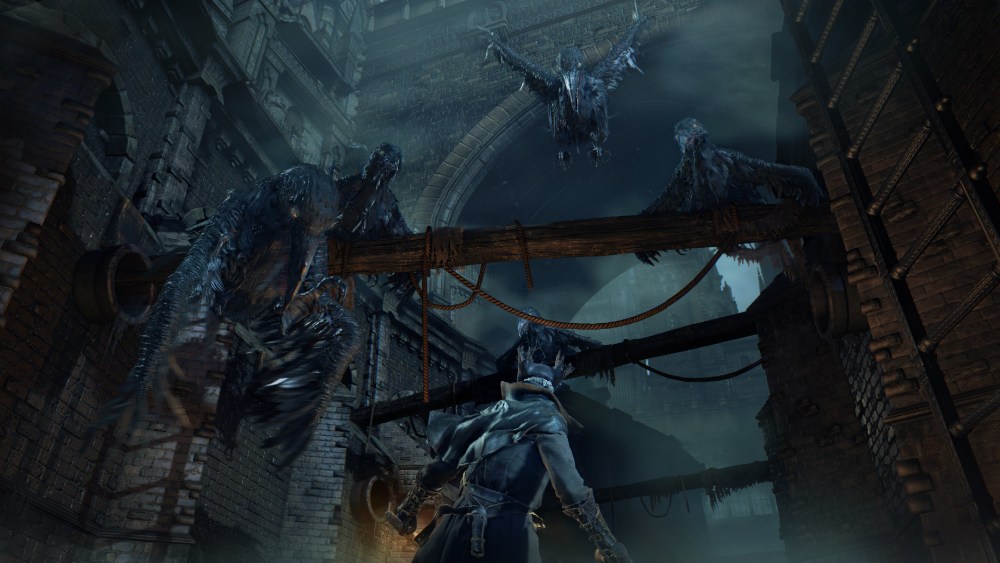 Above: Bird enemies suck, no matter what game you are playing.

We should stop wasting time on what Kojima’s and del Toro’s Silent Hills could have been.

The resurrection of a once industry-renowned franchise is always a tantalizing possibility to hope for. But in everything but name, we already got a more vibrant and competent expansion to the Silent Hill feel in Bloodborne. We feel the same disgusted intrigue with Yharnam’s creatures as we did those that populate Konami’s foggy resort town, the possibility of death had that same frustrated apprehension, and we once again took part in the destruction of a realm bent on becoming roommates with their Gods. Be it Bloodborne’s Lovecraft, or Silent Hill’s Lynch.

To paraphrase the opening of the original Silent Hill: the fear for the flesh has created the fear of blood.