Beiruit-based Wixel Studios is one of the only established game studios in Lebanon, and its story is an inspiring one. Reine Abbas co-founded Wixel Studios with Ziad Feghali and Karim Abi Saleh in Kaslik, Lebanon, in 2008. Their newest project is Aurora, a charitable platform for mobile games that help kids fight cancer. It is one of many games that the company has made in the name of doing good and inspiring change in the world.

Aurora was inspired by Abbas’ own five-year-old child, who wanted them to create a game for a sick child, a relative named Diamand. But while they were brainstorming, the child passed away. They decided to create a free online gaming platform to empower kids with cancer and support both kids and cancer treatment centers. Kids ages three to 11 will be able to play games and engage in a safe social platform with other kids being treated. The public can make donations of $1 a month for cancer research and to expand the platform. They’re raising $120,000 on Indiegogo in a crowdfunding campaign now.

Their first game was a political football, dubbed Douma. It turned the tables, allowing citizens to become puppeteers and use government leaders as puppets in a simple Flash-based fighting game. The politicians pummel each other, and the relief it offered was a kind of salve to millions who played it.

The second game was Gaza Shield, which was created in response to a toxic Israeli game in which players won points for killing children and bombing civilian targets during the 2008-2009 Israeli-Gaza conflict. Wixel Studios’ Gaza Shield’s objective is to save children from Israeli shelling. Students at the University of Texas created a documentary about the making of the game.

Most recently, the company created Survival Race, a social racing game with a story that touches on the subject of global warming. Abbas hopes to reach broader audiences with her games, and she said that 35 percent of Wixel Studios’ players are women. She also said that, rather than focus on careers spent working for other people or large corporations, women should just become entrepreneurs.

Abbas gave talks at the Quo Vadis and Womenize events in Berlin last week. I caught up with her after her talk at a dinner.

Above: Wixel Studios’ Aurora is a game platform to help kids who are fighting cancer.

GamesBeat: Can you tell us about your game for fighting cancer?

Reine Abbas: So, why is Aurora different from the others? It’s not a game. It’s a platform. On this platform, you’re solving three problems.

The first problem is how we can empower these kids who are in cancer treatment, through their avatars and these games and these books. They’ll beat cancer in these games and books with their avatars and create more awareness about cancer among the other kids around them. The second problem is that traditional donation systems are passive and slow. 60 percent of what we make through Aurora will go to research centers all over the world, personalizing treatment for kids.

The third problem is related to the second, which is that today you’re not necessarily linked to whoever you’re donating for. You don’t know who they are. Our system will allow kids to communicate from all over the world, and you can communicate with them through their avatar. We link kids together, empower them, and gamify the donation system.

GamesBeat: What platforms are you on?

Abbas: iOS and Android are where we’re starting. Hopefully we’ll be able to support PC and other platforms in the future. This first game we’re showing is just a demo, but the next one we’re working on is a 3D project we did in Unity. The enemies are different kinds of cancer, drawn in this more cartoonish style. It’s merging fun with a more serious subject. That’s what I’m talking about. We have to use gamification in new ways.

GamesBeat: What were the other games you’ve done at Wixel?

Abbas: The first game was called Douma. You’d say “puppet” in English, the idea being that we’re puppets in politicians’ hands. Douma reversed those roles, letting you play with politicians as they fight against each other. We had millions of users. Nearly everyone in Lebanon played it.

The second was Gaza Shield. A friend of ours from the University of Texas filmed the entire production of the game, from the early discussions in our offices onward, and made a documentary about it. She looked at the making of the game and the relationship between the game and real-life events. It’s touring all over the world now.

Everything we do at Wixel, whether it’s a social game or anything else, always has a mission or a message or something else to it. When I talk about Survival Race, it’s a racing game, a fun social game, but the story has something to say about global warming and other topics. It’s a mixture of fun and awareness. I think that’s part of why we draw so many women players — 35 percent of our players. It has some appeal for everyone.

GamesBeat: Have you been able to find other companies around the world that are doing similar things?

Abbas: Up until now, no. But we’re building a profile. I was named one of the five most powerful women in gaming by Inc.com. I wound up on another list of 10 high-profile women in gaming, where I was the only entry from the Arab world. I’m turning up on lists all the time now, thanks to these games. Our games are changing people’s reality, and we’ll continue to do that.

GamesBeat: The notion of using games for good is drawing more and more attention.

Abbas: Traditionally, games made for a cause have been boring. What we’re doing with Aurora and our other games is fun, and there’s a message at the same time. It’s down to how you gamify your cause or your mission or the message you want to get across. That’s the strength of our productions.

GamesBeat: I wrote up something similar recently, a project by a couple of people trying to create a game about immigration. Their crowdfunding didn’t succeed, though.

Abbas: We’ve been helping encourage a new Arabic crowdfunding platform, Zoomaal. We’re hoping it will grow internationally. CNN is one of the project’s backers, so we’ll see how well it does. 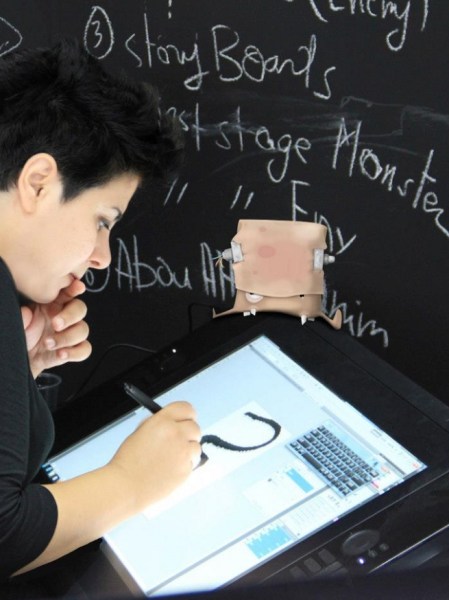 Above: Reine Abbas of Wixel