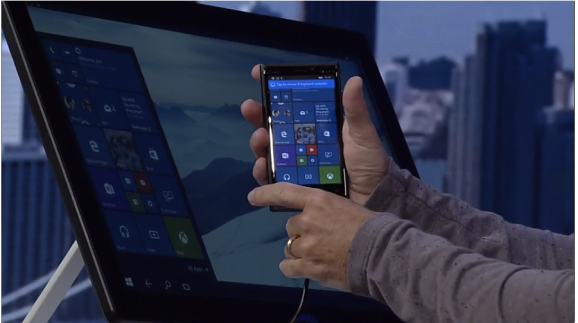 SAN FRANCISCO — Microsoft today at its Build conference announced the arrival of its Continuum feature — the automatic changes in the user experience for devices running Windows 10 — on phones.

Joe Belfiore, Microsoft’s corporate vice president of the operating systems group, took a few actions in Outlook and PowerPoint on a big screen to demonstrate the new capability. It looked like a native desktop PC experience — but the apps were actually running on a phone using Windows 10.

“What we have so far is the first step,” Belfiore said immediately after the demo. In other words, new experiences from developers’ Windows 10 apps should showcase the true capabilities of Continuum.

Operating system provider Canonical has previously proved the possibility of using a mobile device — specifically its Ubuntu Edge handset — in both the usual phone style and as the computer powering a desktop experience. But this is Microsoft’s forthcoming Windows 10, and it figures into Microsoft’s ongoing theme of cross-device applications.

Here’s a video about Continuum on phones running Windows 10: