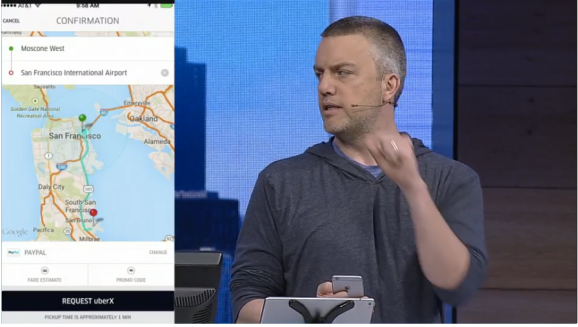 Microsoft's Rob Lefferts showing off an integration of Uber into Microsoft Exchange, thanks to the new unified API endpoint for Office apps, at Microsoft's 2015 Build conference in San Francisco on April 29.

SAN FRANCISCO — Microsoft today showed off at its Build developer conference a preview for a new application programming interface (API) developers can use to get data out of multiple Microsoft Office apps.

Rob Lefferts, general manager of Office extensibility at Microsoft, ran through a demo of the new service alongside Microsoft chief executive Satya Nadella.

Lefferts mentioned integrations with Active Directory, Exchange, and OneDrive for Business, and other Microsoft services in the demo. But he also demonstrated an integration with Uber inside Exchange. It was a surprise for a Microsoft demo — but then again last year Google rolled out an Uber integration with Google Maps.

Nadella was visibly excited by it all at the demo.

“That’s the powerful concept — you no longer are going to different applications for different data,” Nadella said.

Find more of our coverage of news from Build here.