There are now 29 billion-dollar-plus marketing technology companies, according to a new analysis by competitive intelligence vendor VBprofiles. (Disclosure: VB owns 30 percent of VBprofiles.com, which is a joint venture with Spoke Intelligence.)

“50 percent of the unicorns are between six and nine years old,” report author and Spoke Software CEO Philippe Cases told me yesterday. “And six are incredibly cash-efficient … they have become a unicorn with less than $70 million of investment.” 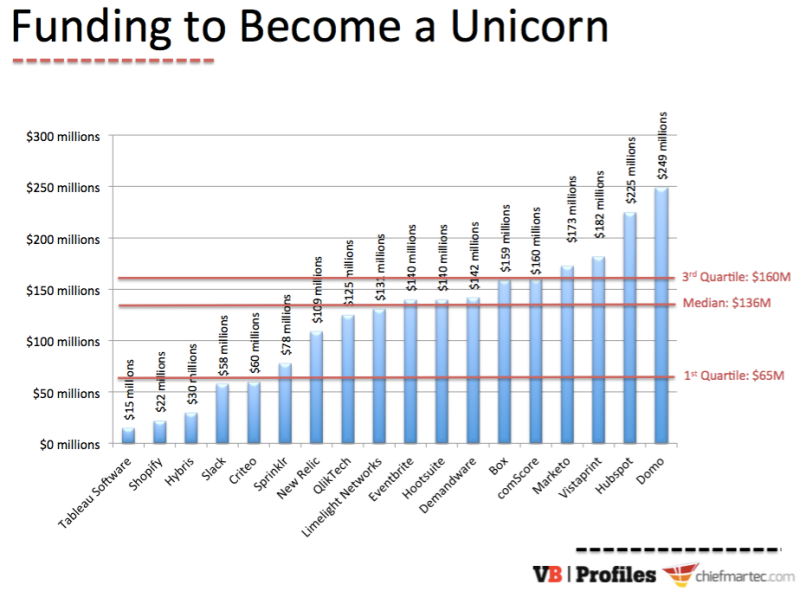 Nine of the unicorns are in Scott Brinker’s “marketing experiences” category, with names like EventBrite, Sprinklr, and Hootsuite. Eight are in the backbone category, including marketing automation powerhouses Marketo and HubSpot, along with DemandWare and Shopify.

Another eight are in marketing operations, and four are in middleware.

Most of the companies required investment of between $100 million and 200 million to reach the coveted billion-dollar status of “unicorn,” but some were more more cash-efficient, as Cases said. Tableau is the all-star in that category: The company required an astonishingly small $15 million of capital to reach its join-the-unicorns-club moment when it hit a $1.8 billion valuation, and the company is currently valued at almost $7 billion. 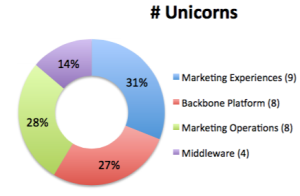 That efficiency means its exit-to-funding dollar ratio was an astonishing 119 to one — more than twice the next-nearest unicorn, Shopify.

Going public seems to be the exit of choice for unicorns.

“Of the 29 unicorns there have been 19 IPOs, meaning that the majority are public companies,” Cases said. “Not that many companies have been acquired.”

Marketing tech has seen more than its share of acquisitions in past years, of course, but munching down a billion-dollar-plus purchase is challenging even for the biggest companies in the space. Only 14 percent of martech unicorns have been acquired, while 28 percent are still private, and 10 percent were bought out.

Interestingly, regardless of the exact industry a player is in, the amount of funding it takes to become a unicorn is relatively consistent, Cases said.

For eager investors looking to score in a future IPO, the eight still-private martech unicorns might be tempting. That list includes Domo, Slack, Sprinklr, Shopify, and EventBrite, all of which have “unicorned,” or surpassed the billion-dollar valuation mark, in the past year or two. 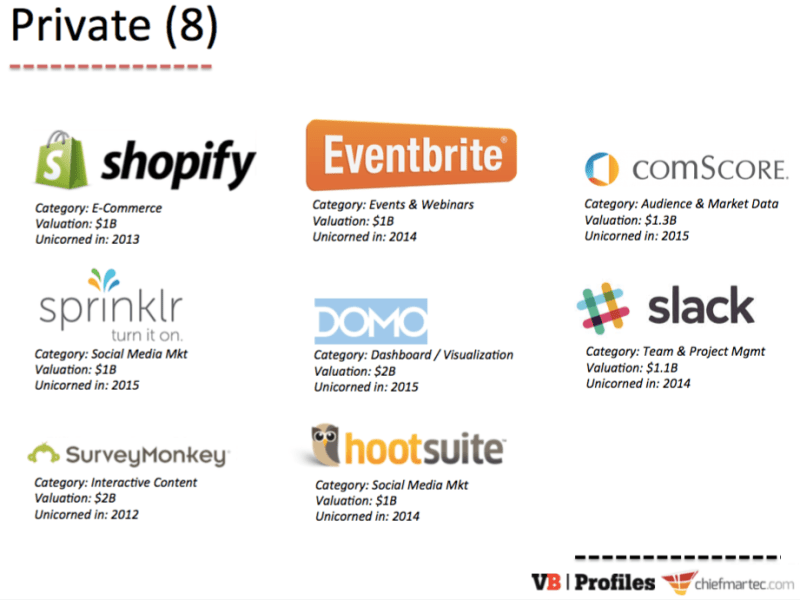 There could be some debate about the meaning of “unicorns” in this context.

Cases said Spoke looked at martech companies that are less than 25 years old, but the vast majority of the companies were founded much more recently than that. (Other analysts have limited themselves to more recent startups — less than five years old — that have joined the billion-dollar club.) Half of the companies on the VBprofiles list hit unicorn status in eight years. The youngest, Tibco, hit it in three years, while the oldest hit it in 17 years.

There’s likely to be more martech unicorns in the next few years. Investment in the space reached $3 billion in just the first quarter of this year — the lion’s share of which went into analytics startups as companies are doing their best to wrestle with the massive amount of data that marketing tech is generating.

This is just the first analysis in what Cases promises will be a long list from VBprofiles and Spoke Intelligence, VB Profiles’ parent company. The full e-book with all the details is available at VBprofiles.