Apple and IBM unveiled a new product that will be used to keep home care patients in Japan more engaged and connected with their health care providers.

The two companies plan to supply iPhones and iPads loaded with IBM-developed health care apps to Japanese seniors, who will report health data up into Apple’s HealthKit and ResearchKit cloud integration platforms. Health care pros will access it from there.

The initiative will roll out as a service through Japan Post, a company that provides postal, banking, and insurance services.

Among the types of services the new initiative will offer, Apple CEO Tim Cook explained that Apple apps will be integrated every step of the way. For instance, Siri, Apple’s digital personal assistant, will be able to read emails to people with visual disabilities. 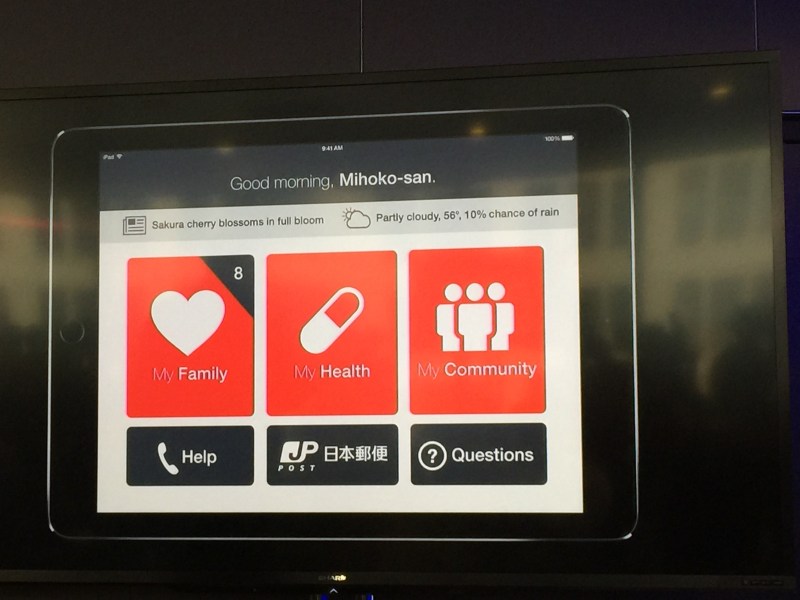 The companies hope the technology will help seniors take care of their own issues with a little technological assistance. A representative from IBM said that the cost of the service will be “nominal” — there’s also an opportunity for insurers or providers to pick up the tab.

Cook and IBM CEO Ginni Rometty were on hand at the event to announce the new project.

Cook said it’s “no surprise in a culture that respects the elderly, and the wisdom of the elderly, that this particular initiative will begin in Japan.” Japan also has a sizable senior population, one that makes up nearly a quarter of the country’s citizens. Caring for those people represents a large portion of the country’s overall health care spend.

More than 33 million seniors make up about 25 percent of Japan’s population, projected to grow to 40 percent over the next 40 years.

Apple, IBM, and Japan Post say home care patients will be able to determine how much health data they share, and whether they want it anonymized.

Apple and IBM have been working together over the past year to develop a series of enterprise software applications to be used in the retail, health care, airline, and other industries.

The companies announced their first batch of health care applications in April. These included apps that can be used by nurses and other providers to help coordinate, plan, and document care.

One of the apps, called Home RN for iPhone, equips home-based nurses with case management tools, and provides ways to document care and communicate with specialists.

Apple’s and IBM’s work in health care is just getting out of the gates. So far, the partnership has yielded 22 apps for 11 different industries.

IBM now has 2,000 employees working in a new business unit that will apply the Watson machine learning technology to health care data.

Watson-based apps will be used to access and analyze data from Apple’s HealthKit consumer health data platform. HealthKit is meant to collect personal health data from all kinds of wearable devices, including casual fitness trackers and clinical devices like blood sugar monitors.

Together, Apple and IBM hope to bring this initiative to more countries, including the U.S., over time. Timing on that buildout, for now, is uncertain. In the meantime, Japan Post expects to reach 4 million to 5 million Japanese customers by 2020.