The hardware components in the Apple Watch are the least expensive of any Apple product when compared to the total retail price of the device.

The chips and sensors and vibration engines and other parts total up to $81.20 in the 38mm version of the Watch, or about 24 percent of the retail price, according to a new report from IHS Technology.

The retail price of the Apple Watch Sport 38mm is $349. Preorders for the device began April 10, and Apple has been woefully slow at fulfilling orders.

The total cost to produce the Watch is $83.70 when the $2.50 per unit manufacturing expense is added in, IHS said.

Perhaps the most interesting component price in the analysis is that of the battery — 80 cents. If IHS’s estimate is correct, it seems that Apple spent a laughably small amount of money on the one component that seems to hinder the capabilities of the Watch the most. The battery lasts only 18 hours on a charge, which is an annoyance, but the limited power might also prevent the addition of things like GPS and cellular radios, which tend to require significant power resources. 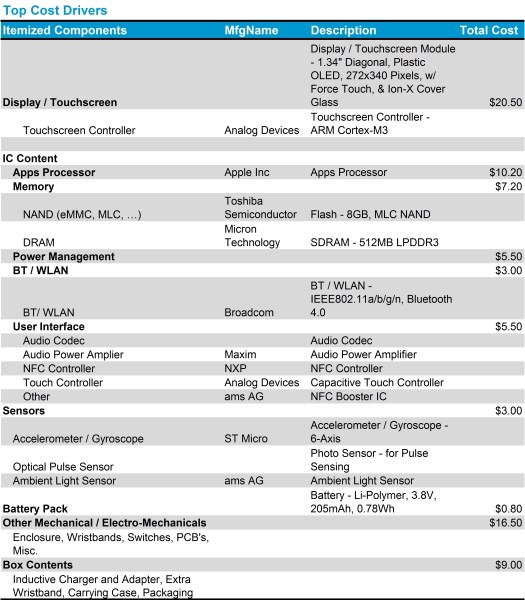 The estimate, of course, doesn’t include the expensive TV ads, store displays, and other marketing collateral created to sell the Watch. The marketing costs are likely far more than the cost of the Watch itself.

Nor does the number include logistics, amortized capital expenses, overhead, SG&A (selling, general & administrative expense), R&D, software, IP licensing, and other variables throughout the supply chain such as the EMS (electronics manufacturing services) provider.

IHS says the low component cost-to-retail price ration is nothing unusual. “It is fairly typical for a first-generation product rollout to have a higher retail price versus hardware cost,” said IHS Technology analyst Kevin Keller in a statement.

“While retail prices always tend to decrease over time, the ratio for the Apple Watch is lower than what we saw for the iPhone 6 Plus and other new Apple products, and could be of great benefit to Apple’s bottom line if sales match the interest the Apple Watch has generated,” Keller said.