We’re finally at the last wing of Hearthstone’s latest adventure, Blackrock Mountain. The fifth and final set of bosses are tricky, but this guide is here to help you beat them all and earn some cards.

Note that these strategies only cover the normal versions of each fight, but we do talk a little bit about what’s different in the (much harder) Heroic versions. Activate Arcanotron will summon different minions and change in mana cost. At first, it summons a 2/2 minion for 2 mana that gives +2 to spell power for both players. Then it costs 4 mana to summon a 3/3 minion that deals 1 damage to all other minions at the start of his turn. After that, it’ll cost him 6 mana to play a 5/5 minion that makes all spells cost 3 mana less. Then, for 8 mana, he’ll summon a 7/7 minion that deals 2 damage to a player who plays a card. After that, his Hero power always costs 4 mana and summons one of those minions at random.

Honestly, none of those minions are particularly scary. You can easily kill all of them after one turn, and it’s likely Omnotron won’t even live long enough to use his 8 mana Hero power. This is pretty much a standard Hearthstone match. You can win with any decent deck. Above: Health is attack, attack is health.

Passive hero power: The Alchemist (Whenever a minion is summoned, swap its attack and health.)

His Hero power is passive, so every single minion played will have its attack and health swapped. You can either make a deck that uses this to your advantage or just play one where your minions’ attack and health are almost equal anyway.

He has a 2 mana spell called Summon the Aberrations! that summons three 1/1 minions with charge. You might want a couple of area-of-effect spells in your deck that can deal with them. He also has Acidic Swamp Oozes in his deck. They’ll destroy your weapon, so be careful about using them in this fight.

Again, this isn’t a particularly complicated fight. You could win with an aggressive, fast-paced decks or slower, control-based decks. Above: Don’t let that weapon get too strong.

Hero power: Echolocate (Equip a weapon that grows as your opponent plays cards.)

For 1 mana, Atramedes will equip a weapon that has 0 attack power and 6 durability. However, it gains 1 attack power every time you play a card. You also start the fight with 3 spells called Reverberating Gong. For 1 mana, they’ll destroy your opponent’s weapon. He also has a 4 mana spell called Sonic Breath. It deals 3 damage to a minion and gives his weapon +3 attack.

You’ll want to play a control deck here, since playing a lot of cheap minions each turn will power up his weapon. Really, the best thing to do is try to only play one card per turn, at least when he doesn’t have a weapon equipped. And save your Reverberating Gongs for when after he plays Sonic Breath, when his weapon is strongest. Don’t just play those Gongs every time he equips a weapon, or you’ll run out of them quickly. 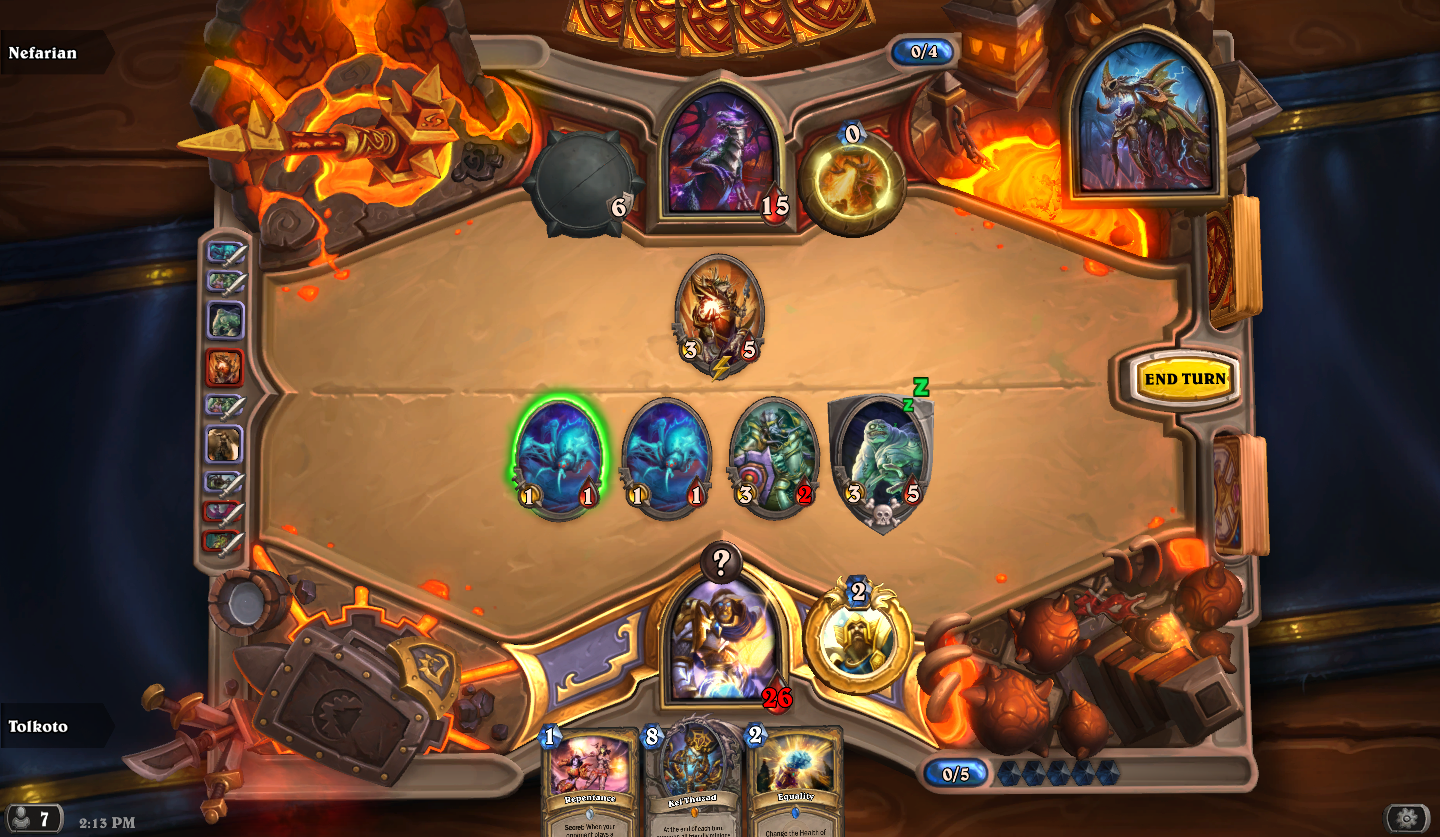 Bone Minions costs him 2 mana to play for 2 mana. He’ll also start the fight with 10 armor.

Nefarian’s deck is fast and aggressive, especially with the help of that Hero power. A lot of his cards involve dragons or play off of that type. It’s best to play a control deck, especially one with area-of-effect spells like the Paladin’s Consecrate or the Druid’s Swipe. Those will help you manage those Bone Constructs.

However, once you get rid of Nefarian’s armor, he’ll step aside as you fight Onyxia. She counts as a different hero with 15 health. She automatically equips a 2/6 weapon, and her Hero power, Nefarian Strikes, costs 0 mana and deals one damage to your hero. He can sometimes do two or three damage, though. Basically, you want to kill Onyxia as soon as you can before your hero takes too much damage.

After Onyxia dies, Nefarian returns. Be careful, though. He’ll clear the boards of all minions when he does. So, try not to play any especially important or strong minions if you don’t need them to kill Onyxia.

This is a long fight. Again, you’ll really want a control deck here. You’re going to need some strong minions to protect you and hurt Nefarian in that third phase.