Tommy Palm, the former “games guru” at King and one of the designers who got credit for the enormous success of Candy Crush Saga, has officially launched his Resolution Games virtual reality gaming  studio.

The Stockholm-based studio will focus on creating “VR games that everyone can enjoy and are accessible for the entire family vs hardcore or triple A titles.” The founding team includes Palm, who was the spokesperson and games guru for King Digital Entertainment, which went public at a $6 billion on the strength of the success of the match 3 game Candy Crush Saga. Prior to that, he founded mobile game maker Fabrication Games, which King acquired in 2012 to help with the transition to mobile. Palm also founded Jadestone, the Game Trail, and the Swedish game accelerator Stugan.

“VR hardware and games are a lot closer than people think. They can create an unprecedented feeling of presence, immersion and a sense of separation from the outside world, which provides a great foundation for making games that can quickly help players feel relaxed and take some time off from their busy lives,” said Palm in a statement. “We are confident that the veteran team at Resolution Games will be key in helping drive initial games concepts that truly kick things off for the industry and take gameplay within virtual worlds to the next level, showing how wonderful these devices can be for games.”

Above: Resolution Games’ founders. Tommy Palm is in red.

The founding team includes Måns Ullerstam, chief operating officer and a pioneer within mobile games. With Picofun (launched 1999, and Aspiro acquired it the same year) he created Lifestylers, the first mobile game in the world to breach a million users. Most recently, he was head of the $100 million Swedish telco, Rebtel.

Vilcans is a veteran game industry developer, with more than 30 years of experience with everything from assembly language programming to server clusters, working with companies like Goo Technologies, Digital Legends Entertainment, and Jadestone Group, which he cofounded with Palm.

Olof Hagelin is a technical artist at Resolution Games, and he has worked on everything from massively multiplayer online games and triple-A releases such as Syndicate to mobile games like Candy Crush Soda Saga. He also cofounded award-winning games company Lockpick Entertainment and worked with King Digital Entertainment, Starbreeze and Fabrication games.

Carl-Arvid Ewerbring, a developer and researcher at Resolution Games, created the award-winning game Spurf among dozens of other concepts and prototypes. He was also the founder of Bookl and EEA Consulting.

The corporate board is currently made up of Palm, Ullerstam, John Elvesjö, and Linus Gunnarson. Others will be announced later. Elvesjö is the founder, deputy CEO, and chief technical officer of Tobii, the eye control and eye tracking technology company. Prior to Tobii, Elvesjö was CEO and founder of sensor and instrument monitoring company Jenser Technology, which research device maker KSV NIMA/Biolin Scientific acquired. Gunnarson is a serial entrepreneur who has worked to guide dozens of startups towards success over the past two decades.

“One of the most important takeaways from massively popular mobile games like Candy Crush Saga, is that the majority of all gamers span across many demographics and often prefer light-hearted vs hard-core games,” added Palm. “Also, the emergence of other amazing VR content — like movies and apps — is making the VR platform relevant for all.” 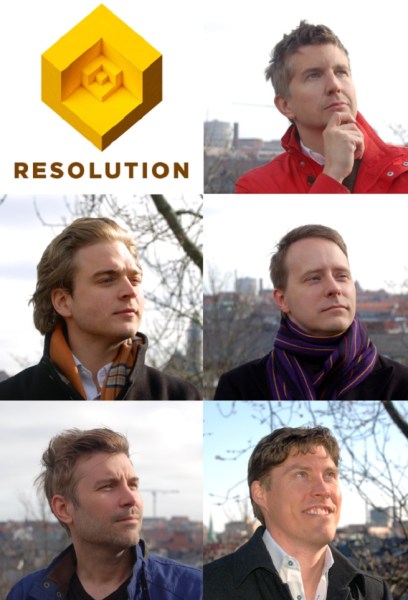 Above: Resolution Games founders. Tommy is in red.