The Android platform will soar past iOS in terms of revenue in a few years, but that doesn’t necessarily mean more money for Google.

Google Play has regularly had more downloads per app than the iOS App Store for a while now, but that’s meant little since iPhone and iPad owners have spent so much more money than people with Android devices. But that’s going to change in a few years, according to a report from advisory firm Digi-Capital. Android apps will make more total revenue than the competition by 2018 as long as you include China, where the official Google Play store has virtually no presence. That’s a lot of money for people making games for Android considering Digi-Capital is predicting people will spend $45 billion on mobile games by 2018.

But while Google will get a lot of the money that goes through its Play market, it probably won’t touch most of what happens in China. That’s because non-Google Android app stores like Baidu, Qihoo 360, Tencent, and Wandoujia dominate that market. If you add all of those up and include it alongside Google Play, the result is that Android is quickly catching up to iOS.

“So while in 2018, iOS should still have the highest mobile games revenue of any one individual app store globally,” Digi-Capital founder and managing director Tim Merel wrote in his report, “mobile games revenue from all Android app stores combined could top iOS. In other words, Android could make more money for games developers than iOS by 2018. And that’s a big deal.”

Merel is speaking at the GamesBeat Summit this week, an invite-only event that will bring together some of the top minds in the industry. 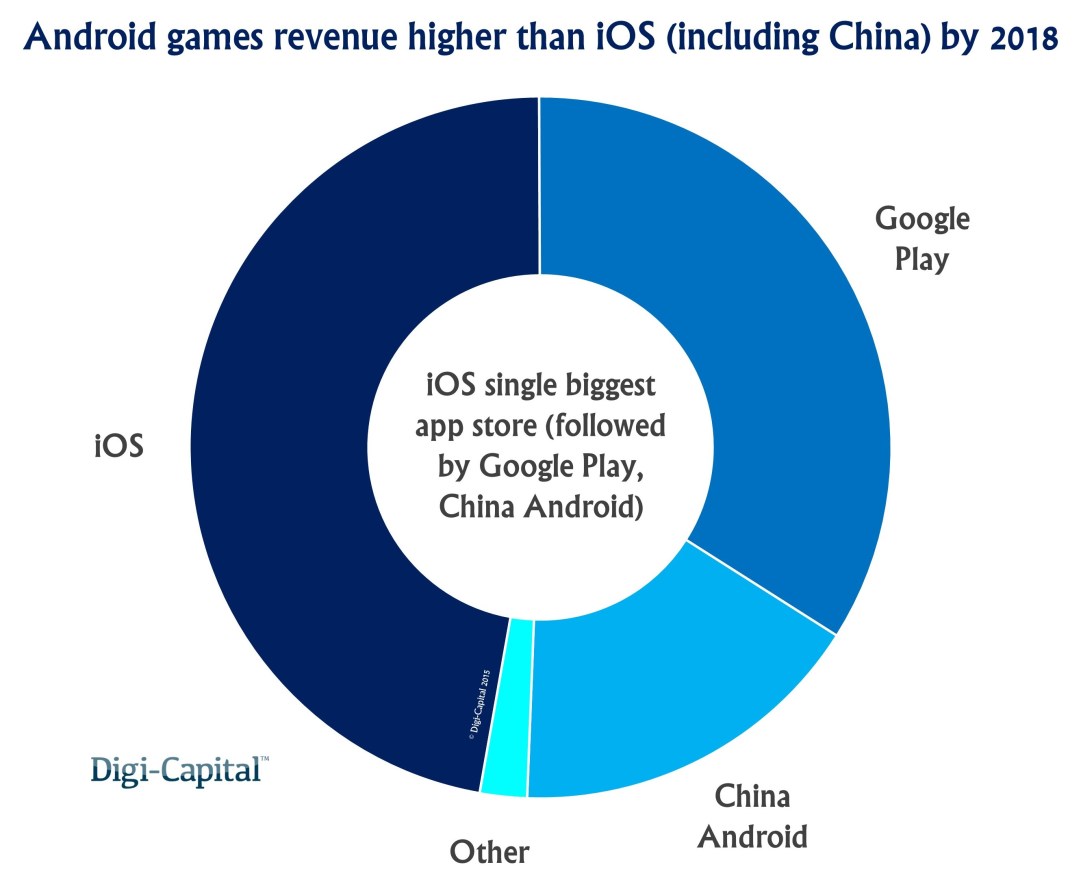 “Since 2012, when Symbian still had 40 percent market share, Android and iOS have systematically taken over China and now account for all but 2 percent of mobile OS,” Stewart Rogers, an analyst at VB Insight, said. “Clearly, with 74 percent market share, Android is leading the way in terms of install base. But Google has a long way to go in both providing value through Google Play for developers and providing a premium experience for users – two areas Apple do extremely well in.”

Despite Android’s surge, Apple’s app market will retain some advantages.

“Yet iOS remains the easier app store for monetization per download,” wrote Merel. “It takes over two downloads on Google Play and over eight downloads on Chinese Android app stores to make the same amount of money as one iOS download.”

And that doesn’t even include the cost of localizing a Western game for a Chinese audience or acquiring the expertise to navigate the labyrinthine app stores in that country.

So even as Android expands, it’s likely that game developers will continue to favor iOS because it will remain easier and less expensive to work with.