Internet.org, the collaborative project launched by Facebook to help bring connectivity to mobile users in the developing world, is being opened to developers for creating their own apps and services.

Becoming a platform opens the service up significantly beyond the handful of partners Facebook has brought on board for its launch markets so far. It’s also designed to fend off mounting criticism of the Internet.org program in recent months.

Launched in 2013 with a lofty promise to “connect the next five billion,” the Internet.org initiative went to market with some notable mobile-focused companies on board as partners, including Samsung, Ericsson, Microsoft, Opera Software, and Qualcomm.

A number of projects have emerged since then, including an India launch back in February that promised to bring Internet access to millions of new users thanks to a tie-up with Reliance Communications. For the initial rollout, 38 different services were made available gratis, covering news, music, sports, search (powered by Microsoft’s Bing), pregnancy information, weather, and more.

However, with the net neutrality debate in full swing, the Internet.org has been criticized for prioritizing content only from a handful of partner companies, which eventually led to some firms in India pulling their support. This in turn led to a lengthy response from Facebook cofounder and CEO Mark Zuckerberg.

Now, it looks like Facebook is acting to deflect such criticism by allowing any third-party developer to integrate with the Internet.org platform. “We’re going to offer services through Internet.org in a way that’s more transparent and inclusive,” said Facebook in a blog post.

However, websites that wish to integrate will have to meet certain guidelines. Facebook argues that it has been selective so far because sites have to be built in a certain way — basically, they must be lightweight and “data efficient.”

“Because these services have to be specially built to these specifications, we started by offering just a few,” said Facebook. “But giving people more choice over the services they use is incredibly important and going forward, people using Internet.org will be able to search for and use services that meet these guidelines.” 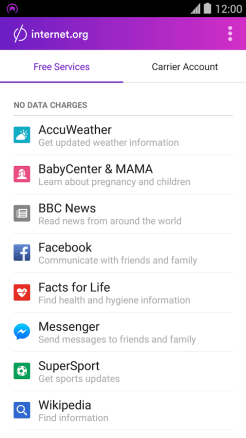 So while Internet.org is technically open to any third-party service, meaning they can offer at least some of their content for free in developing markets, there will be strict guidelines in place.

The main ones, of course, relate to technical specifications. Given that Internet access over mobile is prohibitively expensive in many countries, Facebook said that “high-bandwidth” sites won’t be included, so that precludes video-streaming sites, file-transfer services, and so on.

And websites that do meet the broader criteria for inclusion must still be optimized for mobile browsing — not just on smartphones, but feature phones too, which are still common in many developing countries. A full list of technical guidelines can be found here.

Lastly, Facebook is discouraging websites that adopt a “narrow” view of the web: “Services should encourage the exploration of the broader internet wherever possible,” said the company.

Facebook isn’t the only organization to launch efforts that seek to open the Internet to billions more people around the world. The Wikimedia Foundation offers an initiative similar to Internet.org in the form of Wikipedia Zero, a partnership-driven program that lets millions of mobile users in developing countries browse Wikipedia without attracting any data charges from mobile networks.

Then there’s Google’s Project Loon, which is striving to bring connectivity to remote areas via balloon, though it is still a very early-stage initiative. Google also recently revealed a new trial project for Chrome on Android, one that should see web pages load four times quicker and consume 80 percent less data. It’s only being tested in Indonesia for now, though.

Facebook’s Internet.org is available today in nine markets: Indonesia, Zambia, Tanzania, Kenya, Colombia, Ghana, Guatemala, Philippines, and India. While it does, of course, let Facebook push its own services out there and attract millions more users itself, it’s clear that it can and does bring benefits to those who use the Internet.org app by giving them access to a myriad of online information services without worrying about data charges. And if Facebook can encourage thousands more developers and media companies to offer free content, it should go some way toward mollifying its critics.