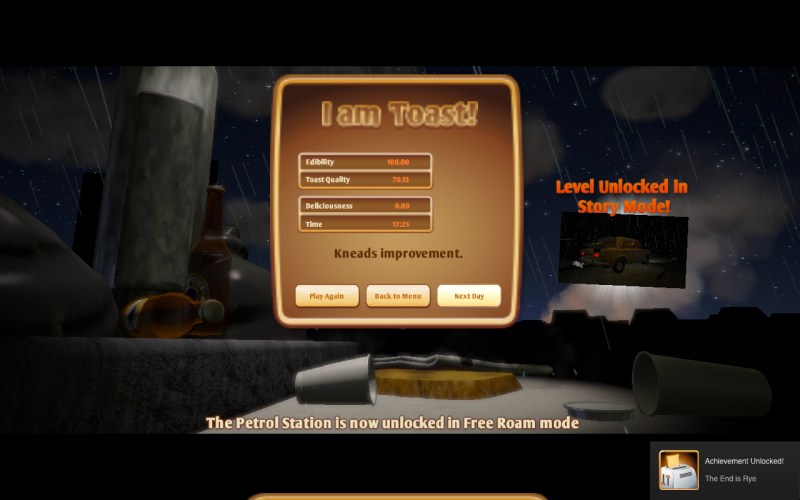 Above: Each time you complete a level, you unlock it in Free Roam.

I played I Am Bread using a DualShock 4 controller plugged into my laptop via USB, and the corners of my bread often did not let go when I released their buttons. I’d have to push the button again to keep going, and this almost always happened in the middle of wall climbs or during frantic attempts to get up off of the floor before I failed a level.

But I really can’t think of a “good” time for this problem to happen, since such a big part of I Am Bread is establishing a rhythm, focusing on each corner, and timing your movements perfectly. It’s a huge issue, and while the cost of failing a level isn’t huge, controls as demanding as I Am Bread’s need to work every time, and you should never have to start over because they failed you. 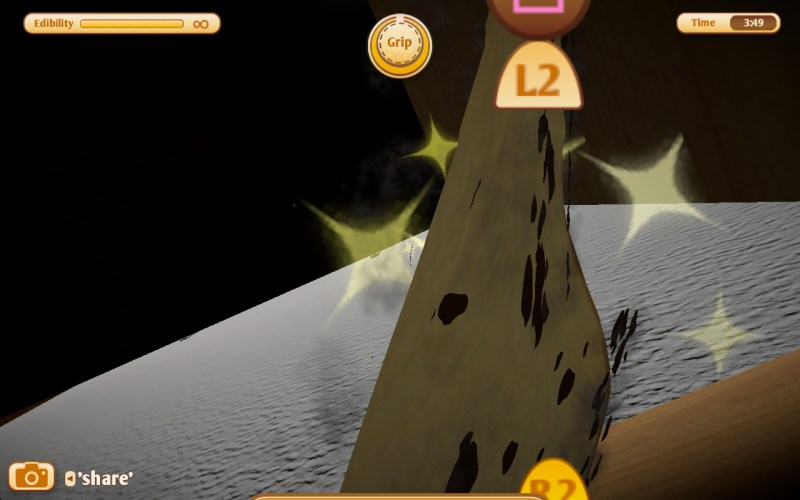 Above: Yes. The camera is really this bad sometimes.

The camera is frustrating and often unfriendly

While you’re figuring things out, you’re probably going to fall between or behind things a lot. And when that happens, the camera will be right there to make things worse.

You ostensibly have control over the point of view using your mouse or right analog stick, but sometimes it’ll swing around for no reason and show you nothing useful. It will zoom in, swing around to face the wall, or even just refuse to move. And once that happens, you might as well just start the level over and try not to go to that part of the room ever again because it’s apparently haunted or full of magnets or something.

And it isn’t only when you’re in a tight spot. I was crawling along the top of a refrigerator once, and the camera just refused to come up to my level. It was like it was stuck on the handle or a corner, and while I could see the button cues on the corners of the bread, but I couldn’t see where I was or where I was going. I wasn’t even doing anything weird here; this should have been a safe and relatively easy route, but the neurotic camera made it way harder than it needed to be. 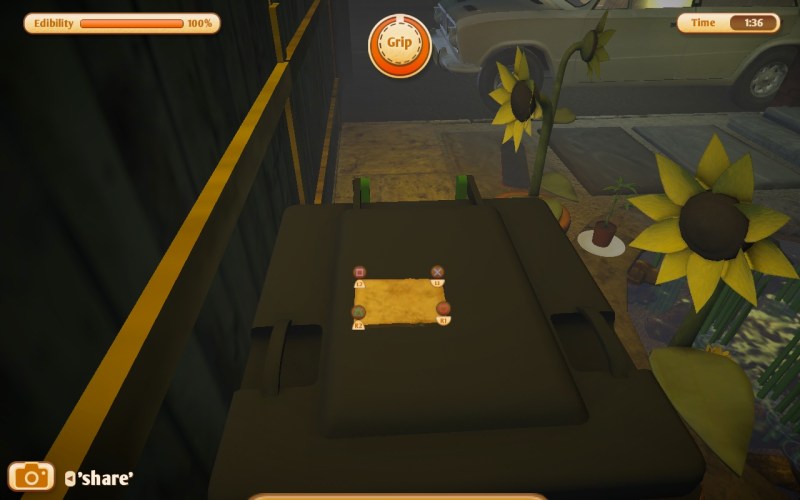 Above: Be on the lookout for things with wheels. They can help you cover a lot of ground quickly and easily.

You don’t usually expect to laugh when you mess up, but that’s one of the hallmarks of the “jacked-up controls” tradition that I Am Bread continues. Games like Surgeon Simulator and developer Bennett Foddy’s similarly onerous titles QWOP, GIRP, and CLOP get a lot of their entertainment value from the slapstick shenanigans that occur when you play less than precisely.

It’s hilarious when you accidentally rip out someone’s entire rib cage in Surgeon Simulator, and I dare you not to laugh when you press the wrong button and send a beautiful and majestic unicorn faceplanting into a rock in CLOP. It’s way less funny, however, to clumsily send a slice of bread tumbling off of a counter to the floor. I did that the other day in my own kitchen, and I didn’t even smile.

The bulk of I Am Bread’s humor comes from its concept: You play as bread. And that’s it. Actually playing the game doesn’t provide the laughs of those earlier games, and many of those are available online for free. It’s definitely a more rounded and substantial offering than Foddy’s work, but one shall not laugh on bread alone.

I Am Bread has an silly concept that’s funny for a little while. Once that wears off, you’re left with a demanding but intricate and interesting title that will challenge you without really achieving the entertainment value of other games with ridiculous controls.

I Am Bread is out now for PC and Mac. The developer provided GamesBeat with a free Mac download code for this review.