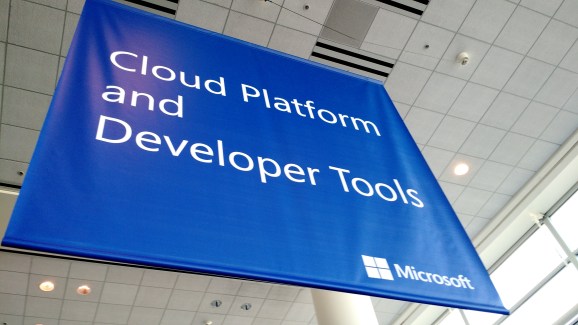 At Microsoft's 2015 Build conference in San Francisco on April 29.

“We’re the only major [cloud] vendor that’s taking our hyperscale public cloud technologies and bringing that to our customers for their data centers,” Mike Schutz, general manager of product marketing at Microsoft’s Server and Tools division, told VentureBeat in an interview.

That might sound like bragging, but it’s pretty much on point. Market-leading cloud provider Amazon Web Services has not done much to handle workloads in on-premises data centers. Neither has Google. Microsoft is taking advantage of that fact.

If anything, this sort of release should catch the attention of VMware, which has a public cloud as well as software for managing clouds in companies’ on-premises data centers. VMware in recent years has launched software-defined networking and software-defined storage services, and Azure Stack comes with implementations of those technologies as well.

A preview of Azure Stack will become available this summer.

Read Microsoft’s blog post on the news to learn more about Azure Stack.