In days gone by, patenting was a numbers game. Quantity was prized, quality was brushed aside, and whoever held the most patents was deemed the winner. The size of your patent arsenal was the focus, not what the arsenal could actually do for you. 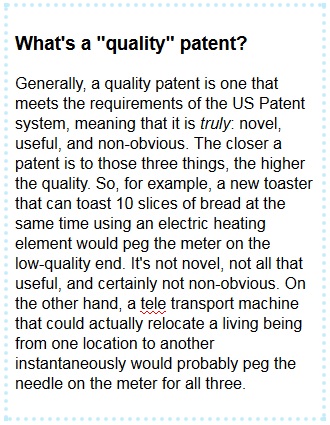 Ironically, the rise of the troll phenomenon was the last gasp of the old world and highlighted the fallacy of patents without quality. This bad behavior helped draw the attention necessary to spur a tectonic shift.

Fortunately, innovators are now moving away from creating untargeted, mass-produced innovations that aim only to secure as many patents as possible, and they’re moving toward precise innovation centered around specific product and market needs. This change emphasizes generating real, tangible ROI and improves the IP field for all stakeholders.

Recent events conducted by the United States Patent and Trademark Office (USPTO) have clearly reflected this shift toward emphasizing patent quality. Two of the events, the Crowdsourcing Roundtables held in April and December 2014, focused on the impact of crowdsourcing. The third offered a platform to discuss potential changes within the USPTO in hopes of continuing to improve patent quality on a broader scale. This event, the Enhanced Patent Quality Summit held in March, was the first of its kind. Such public discussions help the office to stay in tune with public opinion and drive internal improvements. They also serve as an indicator that the USPTO is trying to respond to market demands and patent system imperfections. It is trying to position itself as a leader in the movement and a catalyst for the shift toward quality across the industry.

The USPTO has good reason to support the trend: Users of the patent system are already on board with the need and fully support the trend. The AIA enabled a number of ways to challenge poor-quality patents that are more affordable than litigation. Two of those methods, Covered Business Methods (CBMs) and Inter Partes Reviews (IPRs) filing, have taken a dramatic leap in recent years. According to the USPTO:

What does this tell us? First, patent system users are ambitiously taking advantage of these quality-focused tools. Second, patent applicants are beginning to see the risk in betting the farm on the presumption of validity, as opposed to making an investment in the actual quality of the patent.

Further to the absolute numbers, many filers are winning the quality argument, making the investment in low-quality patents an increasingly higher risk proposition. Betting on low quality is always a risky tactic – rather, it’s much safer to make an appropriate investment in quality and then take on all comers.

While the use of effective pre-filing methods is skyrocketing, patent litigation is quickly plummeting. Litigation decreased at least 20 percent over the past year. This isn’t to say the patent troll problem has been completely eradicated or that litigation doesn’t still have a foothold in the industry – that would be inaccurate. But this new trend toward ensuring quality ahead of time, rather than pursuing the path of litigation after the fact, is certainly a step in the right direction.

No matter your business goals, a focus on patent quality is essential. The industry — and the world — will be better for it.

Marshall Phelps is the former CEO of Article One Partners and is currently the Chairman of ipCreate. He is author of “Burning the Ships: Intellectual Property and the Transformation of Microsoft.”

Peter Vanderheyden, President of Article One Partners, previously served as the vice president and Managing Director of LexisNexis’s Global IP Solutions business. Later, he played an instrumental role in launching TotalPatent and PatentOptimizer. He also engineered the creation of IBM spinout company Delphion, an intellectual property research venture, later acting as GM and CEO for the company.