The ad platform, which serves 90 percent of the top global advertisers and touches 800 million unique mobile users, says that video advertising on mobile has exploded, jumping 5 times higher between today and a year ago. Video ads now comprise almost 13 percent of Opera’s delivered impressions, up from 2.5 percent in early 2014, and revenue to publishers is up even more sharply.

Video is now responsible for 55 percent of revenue for publishers, Opera said today.

Above: Android now leads in both traffic and revenue, Opera said.

“What we get excited about is TV for the next generation,” Opera CMO Will Kassoy told me last week. “The number one action that consumers do after a brand campaign is click to watch more video.”

Clearly, these are results from just one ad platform — an acknowledged leader in video to boot — and not necessarily representative of the entire mobile advertising ecosystem. But just as clearly, video on mobile is booming. Other players such as Vungle are seeing video grow as well.

And Opera is not just any mobile ad platform.

With its global reach and a solution set that is the result of at least six mobile advertising acquisitions, the company says it is not just the largest independent (read: not Google or Facebook) mobile advertising player, it’s bigger than its top competitors by more than 20 percent. 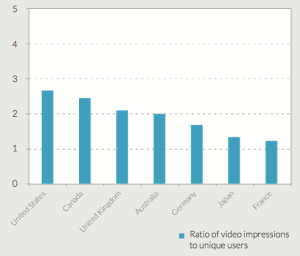 “We hit a major milestone in Q4,” Kassoy said. “We surpassed $100 million in revenues for the quarter for the first time. We’re the largest independent ad network, and our reach is now over one billion monthly impressions.”

That probably puts it on a $500 million or better run rate for 2015, and it means that we’re not just seeing one small company grow in one area. Rather, we’re seeing evidence of a massive and significant change in consumer/mobile user behavior: intentionally watching video advertising on small screens.

It’s not shocking that this change is most noticeable in richer, developed nations.

The U.S. leads in this category, followed by Canada, the U.K., and Australia. German, Japan, and France round out the top seven nations on this score. The richer, larger nations tend to have better infrastructure for delivering quality video on mobile, higher levels of fast mobile device penetration, and — of course — more advertisers trying to reach potential customers for higher-priced goods and services.

What is shocking is just how much higher-value these video impressions are.

Video is now 12.8 percent of impressions across the Opera Mediaworks demand-side empire, but it accounts for that already mentioned 55 percent of dollars delivered to publishers. In other words, this is an ad unit that punches above its weight from both the publisher and advertiser point of view. And, in this age of hyper-measurement of impressions, conversions, attributions, and ROI, it’s an ad unit that is proving its effectiveness.

In other news, Android has overtaken iOS in mobile ad revenue, at least for the segment of users that Opera sees, which is a little more globally distributed than other more U.S., Asian, or European-focused networks. Opera has significant presence in Africa, South America, and the Middle East, all of which skew Android to a higher degree than North America or Europe. 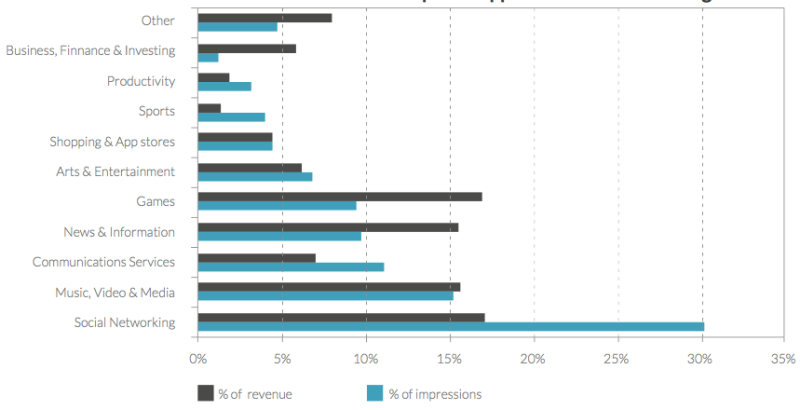 Perhaps not surprisingly, movie and TV networks accounted for the largest use of video in their ad campaigns, followed by food and drink, and then automotive:

Interestingly, games did not make nearly as extensive use of video.

“The key question is how do you drive marketing effectiveness and efficiency,” Kassoy said. “The brands that are more advanced and sophisticated are moving from awareness — like TV — to some form of engagement … which would lead to learning more about a product or service, and ultimately to a purchase.”

What are the next big changes for video? Native advertising and programmatic, said Kassoy.