The X-Wing and TIE Fighter games do a lot of things right, but when it comes to modeling physics in space, they are about as accurate as a Stormtrooper firing his blaster. But one of the masterminds behind LucasArts’ space-sim classics is going to change that with his next game.

Today, Impeller Studios — which just announced its very existence on April 14 — threw the tarp of its first game. It’s Starfighter, Inc., a space sim set in the near future, where humanity has reached the stars and corporations, not governments, make the rules. And it’s heading to Kickstarter, entering a spacefighter sim arena in which fans, not game publishers, set the terms. The recent Elite: Dangerous was an early Kickstarter success with $2.4 million in funding, while Star Citizen has raised more than $77 million as of this report.

Starfighter, Inc. takes place in a near-future setting (Impellar is coy about how near this is, citing decades but not millennia) where we’ve colonized other planets. Corporations, not governments, rule space, and you’re a paid fighter jockey flying for one of these megaconglomerates.

If this sounds even a bit like Elite: Dangerous, it’s not.

“It’s sort of like the Counter-Strike model of intense gameplay: quick sessions, lots of fun. It’s not fly-for-an-hour-and-find-an-asteroid. It’s get in, blow stuff up, and have a great time,” said Coray Seifert, the executive producer and head writer for Starfighter, Inc., during an interview at the Game Developers Conference 2015. “Don’t get me wrong. We love Elite, we love Star Citizen. But we’re in the middle of this space-shooter renaissance, so if you’re not different, you’re dead.”

Instead, think Babylon 5 meets Gravity: Starfighter, Inc., plays on hard science — no sound or no burning fireballs, and Newtonian physics when it comes to ship movement. Remember how Starfurys flew in Babylon 5, needing to deal with the momentum that comes from moving about in a vacuum? That’s what soaring through the stars will be like in Impeller’s debut.

“There’s no sound in space. You’re hearing the rattling of your ship. And the physics are like true Newtonian physics, where you’re sliding around and rotating as opposed to a World War II dogfighter,” Seifert said. “So we think this is how we can differentiate [our game] and make something really cool.” 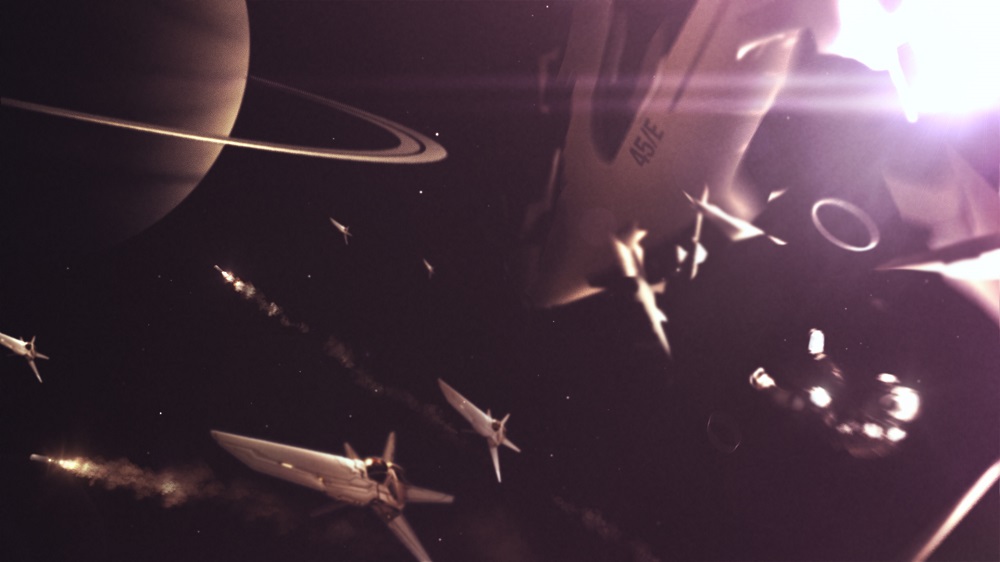 Above: A group of fighters assemble near Saturn.

Corporations fight over new and rare resources in Starfighter, Inc., and the players are elite mercenaries who enforce the interests of these titanic companies. It has no, as Seifert said, “Good Guys vs. Bad Guys — it’s you and your buddy, fighting for your mercenary company, trying to make a name out on the final frontier.”

Right now, Starfighter, Inc. has recon fighters. These small, fast, fragile ships are about “the information war,” Seifert said, gathering recon instead of fighting other ships. But Impellar has plans for a variety of spacecraft: heavy fighters, assault transports, and carriers (which may not be playable, but these will be where you launch your forces, refuel, and such). And the other cool thing about near-future, Seifert said, is that the size difference is greater than most people think.

“The smallest will be a man in a pod, almost like a drone today. The biggest ships are going to be the size of cities,” he said. “They’re going to be these city-sized, self-encompassed living environments — think about the Empire State Building on its side. That’s the model most people are projecting for a hard-science future.”

The studio’s leaders have the background to pull it off: Creative director Jack Mamais (he was the lead designer for Crysis and Far Cry, and his game credits stretch back to MechWarrior 2 expansions) and lead designer David Wessman (who was one of the main devs behind all of the X-Wing, TIE Fighter, and Secrets of the Luftwaffe games at LucasArts) have decades of experience in making high-end video games. 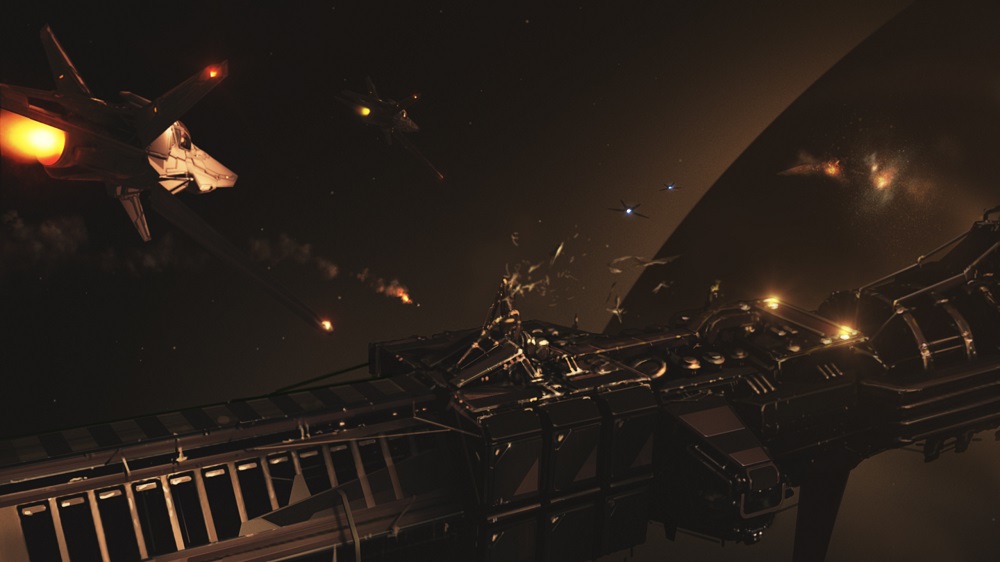 The Babylon Project, a fan mod of the FreeSpace engine from the same sci-fi series, is the first space-sim I’ve played in which real physics played a role. Piloting a Starfury in that mod is tricky, as you must use thrusters to help control your movement since your momentum never comes to a real stop.

You’re going to see something similar with Starfighter, Inc. It’s the core, in fact.

“It’s a little hard to learn, so for us, for new players, we’ll have ships that are a little easier to fly, but you don’t have the high-end maneuvering capabilities, so you can jump in and not get super frustrated,” Seifert said. “The Assault Transport is going to be a great ship for newer players because it’s big, tough, and slow, and all you’re trying to do is survive until you get across the battlefield, reach the carrier, hit the landing sequence, drop off your troops, let them do their thing, they get back on, and you get out of there.”

To nail this, Impeller tapped its physics fanboys: Mamais and Wessman.

Think about some of the fighting sequences in Babylon 5, where starfighters strafe bigger ships, turn around, and then come right back for another run. Or swiftly rotate on their foes and become the aggressor. You don’t need to create separation as you would in X-Wing or Wing Commander to get someone off your tail.

All you need is science. Hard science. 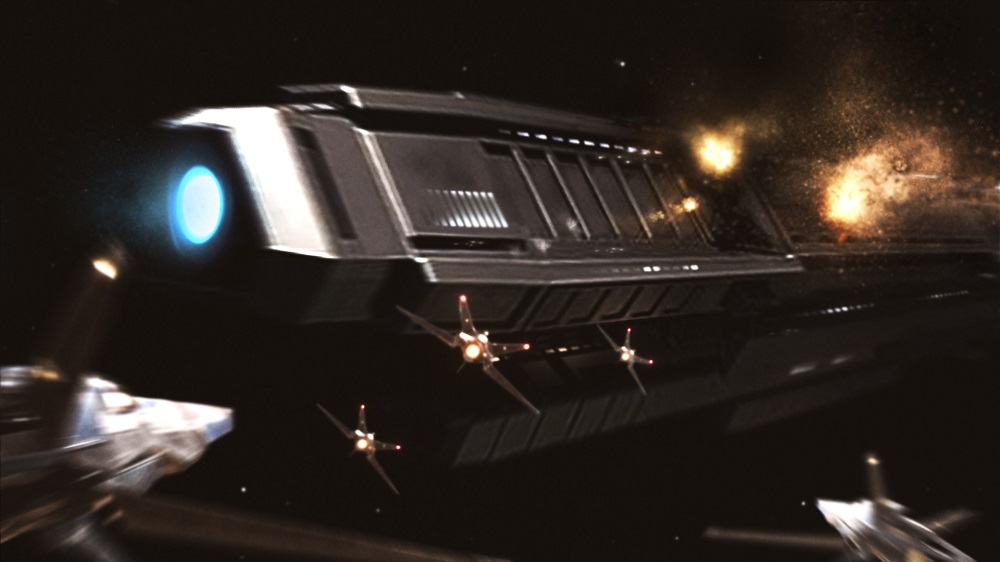 Above: That cruiser’s toast.