Mark Skaggs is a rare game creator because he has built casual games like FarmVille at Zynga and hardcore games like Command & Conquer while he was at Electronic Arts.

Now Skaggs, senior vice president of games at Zynga, is combining those skills as the co-creator of Zynga’s Empires & Allies, a hardcore mobile game which is launching today on the Apple iTunes App Store and the Google Play store. I saw the game in a preview, and I believe it’s going to be a lot of fun. The question is whether gamers are going to accept this title, which morphs Empires & Allies from a cartoon-like social game to a hardcore game with outstanding graphics and intense combat.

This game, started under former Zynga chief executive Don Mattrick and carried on by his replacement and Zynga founder Mark Pincus, is a critical game for the San Francisco company. Like Dawn of Titans from Zynga’s London-based NaturalMotion studio, Empires & Allies is a test of whether Zynga can make the leap to new audiences on mobile devices. Skaggs believes that bringing a new level of control to your fingertips is the key to making a modern military game work on mobile devices.

Zynga’s traditional casual fans aren’t likely to enjoy Empires & Allies. But to Skaggs, this is a task is about forging into unexplored territory. The company entrusted this job to him because his games have been played by hundreds of millions of users.

The game is also a test of Zynga’s new leadership. Skaggs said he learned tecniques for building great games from both Mattrick, his former boss twice over, and Pincus, his new boss twice over. 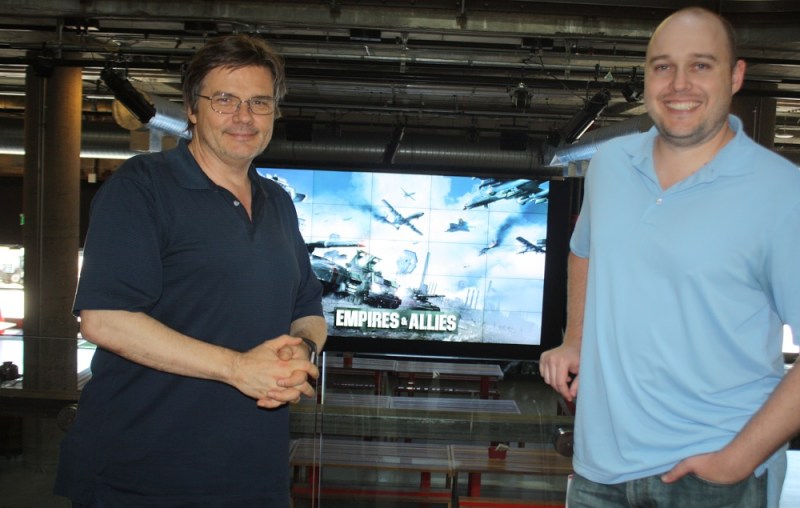 Back in 2008, Skaggs, a former Electronic Arts studio executive, was originally hired to make a strategy game. His team created a prototype that took six minutes to load on the web. They decided the tech just wasn’t there yet.

“Two years ago, we decided it was ready,” he said. “And we would target the next-generation tablets and smartphones. We wanted to capture the fun of a real-time strategy (RTS) game and put it in a light and consumable form.”

Skaggs assembled a team that included former Command & Conquer Generals developers, as well as seasoned social game developers from FarmVille and CityVille. They kept the team small and nimble at just 20 people. And they were able to do that by adopting the Unity game engine, rather than trying to create their own technology for handling 3D graphics, physics, and other game tasks.

Cameron McNeil, the principal game designer, joined from the team that created Solstice Arena, a multiplayer online battle arena (MOBA) game created by A Bit Lucky, which was acquired by Zynga. 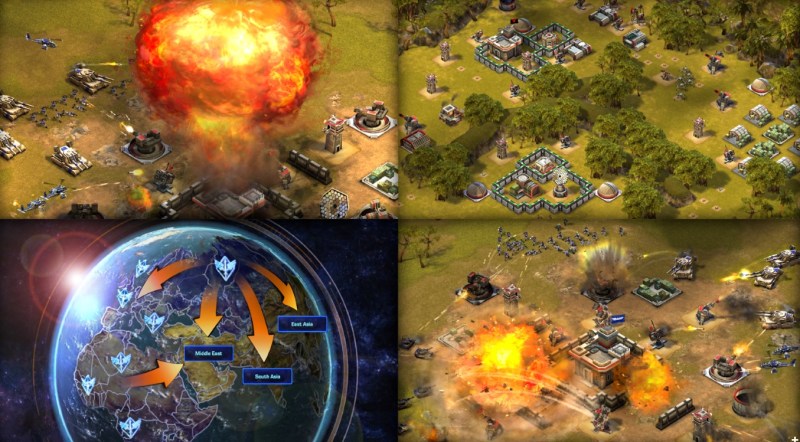 “We kept the team as small as possible and pulled in industry vets,” Skaggs said. “We pretended we were not part of a large publisher, and we made every decision matter. We said let’s make a mobile game that delivers the fun and excitement of a traditional RTS game, but with the right amount of finger-to-tablet interaction.”

The result is a game that looks a lot like the old Command & Conquer series, where you have to send infantry, tanks, helicopters, jets, and other futuristic weapons to attack a base. The combat is full of explosions, pitched battles, and strategic and tactical decisions. But critics might say it is no more than a souped-up Clash of Clans clone.

But in contrast to RTS games on the PC, you won’t be micro-managing every single combat unit. And the combat won’t be synchronous, where both players move at once. The fighting will be asynchronous, where a defender will be offline and the online player will attack the defender’s base.

This asynchronous gameplay is the same style of Supercell’s Clash of Clans, which has generated billions of dollars in revenue over the past couple of years and remains the No. 1 top-grossing mobile game. You build your base and launch attacks on enemy bases, either in single player or multiplayer. 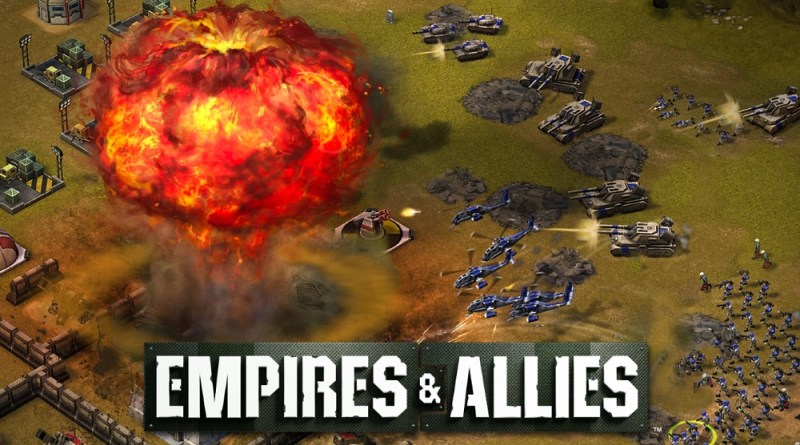 The modern military look of the new Empires & Allies is far different from the original Empires & Allies, which was built by some of the original Command & Conquer team for Zynga’s casual audience. That game debuted on Facebook on the web in 2011, and it grew to tens of millions of users. But that audience evaporated quickly as well, and Zynga shut the game down by 2013.

Consumer research showed that there was demand for a game with more realistic modern military themes.

“People said that they were interested, but the cartoon style is not for me,” Skaggs.

To come up with the weaponry and art, the team combed through the pages of Popular Science, and studied advanced defense predictions about weapons such as Thell lasers, drone swarms, rail guns, and special laser defenses.

“We’ve set this in the modern military age, plus five or 10 years,” he said. “A bad guy has convinced people to turn bad, and his GRA group has taken over the world. Your job is to take it back, one country at a time.”

The game is very deep with 250 free-to-play missions, which can be played as part of a single-player campaign. But the game is tuned for iOS and Android mobile devices, with smaller scale bases and armies, and battles that last perhaps three minutes instead of 30.

The meta strategy map is a rotating globe that shows the enemy’s countries in red and your countries in blue. You can clear out the enemy’s in any order you wish, building up to a big boss fight whenever you take over a continent, said McNeil.

When you set up your base, you collect resources and create buildings to build your army. The defenses include turrets with interchangeable weapons. You can create a turret that has a Phalanx Cannon to attack troops, or a Thell laser that burns armor, or a Dome aerial defense to shoot missiles or aircraft. The attacker can’t tell which defense a turret has until he or she actually attacks it.

That adds a bit of mystery to an attack. But the attacker has the ability to adjust on the fly. You can pull in super resources like an A10 Tank Killer aircraft to bomb tough spots, or deploy tanks to take out air defenses. You can also pilot a laser-guided Hellfire air-to-ground missile to its target or launch a devastating satellite orbital attack on enemy buildings. These super attacks were the most fun to do in the demos that I saw.

“In other games, we felt like you would drop all your troops and it was like a flood,” Skaggs said. “You would see how far out they could spread over the base. That doesn’t give you as a player a lot of decisions to make. We wanted to give you the essence of making decisions in an RTS.”

On the offense, you can drop rally flags to direct attacks. And on defense, you can set your mobile troops to patrol, moving back and forth. Each kind of attacking unit has its foil in defense. Spider drones can take out tanks by hopping on top of them and crushing them. You can set up ambushes for attackers in the form of stealth tanks or hide units behind trees.

“The super weapons can turn the tide of battle, keeping the momentum of your attack moving forward,” McNeil said.

Zynga has been testing the game in nine territories for up to  10 months. The soft launch data has proven out the strategy, with strong key performance indicators, Skaggs said.

The game is social. You can create alliances and generate loot for an alliance member when you attack certain buildings. Your friends are like force multipliers, and you can ask for resources and gift resources to other alliance members.

“We learned a few things from FarmVille,” Skaggs said. “You can play without friends, but you are more powerful with them.”

When you spend money, you purchase a premium currency. You can use it to speed up build times, but you can’t pay to win. There are no decorations to buy yet, since Skaggs wanted to get the core of the gameplay right first before adding things such as customization. Over time, as the launch rolls out, Zynga will add things like leagues, tournaments, and events.

As for whether this is really a Zynga game, Skaggs said, “Over time, people will associate certain games with the studio that made them, like the RTS studio at Westwood (which EA bought and eventually closed).

“Some may play because it’s a Zynga game,” he said. 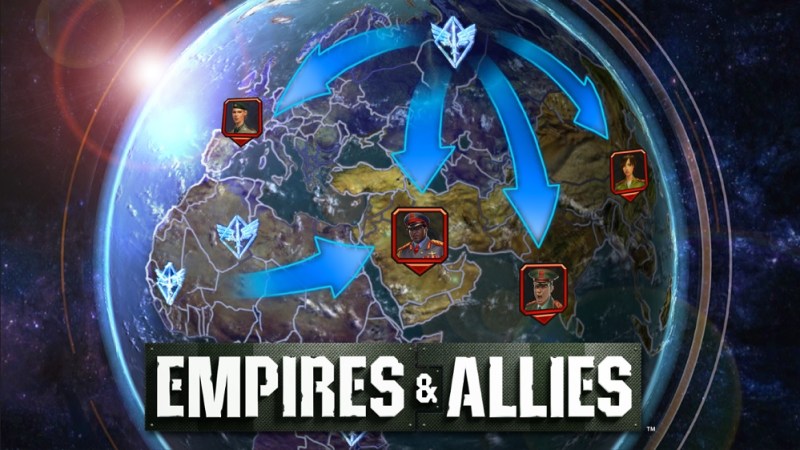 It’s not all about getting hardcore gamers. Zynga has made some nods in the direction of its casual audience. There is no blood, gore, or foul language.

“It is more toys in the sandbox,” Skaggs said. “It’s not gritty, edgy. There is no gratuitous blood and gore. People want to be the hero. It’s a Hollywood version of reality, not what they see on CNN.”

The game is about 100 megabytes, which is a lot to download on a mobile device. That’s about the limit that Apple will allow for an over-the-air mobile download. The game is available in 13 languages.

As for working for both Mattrick and now Pincus once again, Skaggs said, “I’m fortunate that during my time at Zynga, I’ve had the opportunity to work with two great CEOs, both of whom are tops at their areas of expertise and leadership style. The most successful games I’ve ever made were first working with Don at EA on RTS games and then working with Mark during Zynga’s early days with FarmVille and CityVille.”

He added, “Don brought his AAA game making pedigree to Zynga, led our transition from web to mobile and planted the seeds for Zynga’s future with games like Empires & Allies. Mark has always brought an entrepreneurial, founder-led spirit along with a strong drive for metric based game making and business processes. For example, while Don was CEO, I tapped Mark for his specific expertise around social and virality. I’ve learned a lot from each, and I’m thankful. Both have been influential and supportive of us bringing Empires & Allies to mobile.” 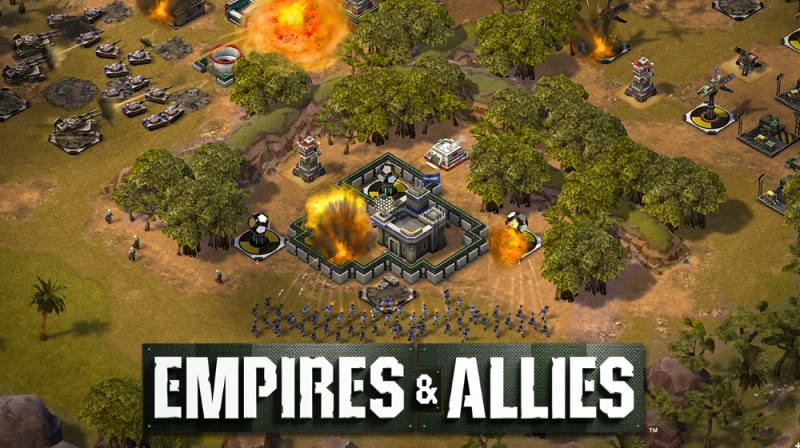