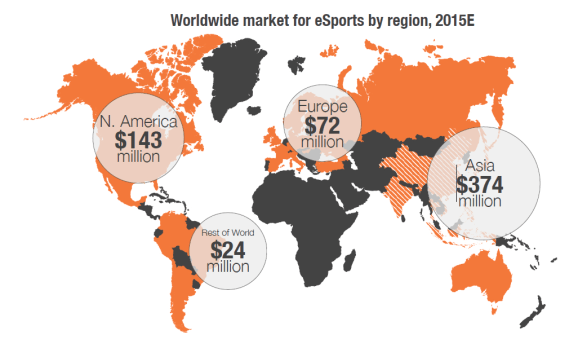 The e-sports market is still biggest in Asia, but it's growing across the West.

Young guys with a lot of money are watching e-sports, and this is turning it into a market of its own.

Competitive gaming is a $621 million business, according to intelligence firm SuperData Research. That money primarily comes from Asian markets like South Korea and China, where the e-sports scene is huge and has an established history of success. But it’s also growing in Europe and North America thanks to popular games like League of Legends, Dota 2, and Counter-Strike: Global Offensive. In addition to the money, e-sports fans around the world number in the 134 million range. But even as more money and people pour into this space, SuperData founder and chief analyst Joost van Dreunen argues that it is still a marketing tool for publishers before anything else.

What e-sports fans look like in the United States

“Most of the worldwide revenues today come from advertisers and corporate sponsors,” wrote van Dreunen in his latest e-sports report. “But e-sports also offers publishers an opportunity to expand the touch points around their games and give fans news way to engage with their favorite characters and enter into a deeper experience.”

Publisher Riot Games has said publicly that it generally loses money on its e-sports initiatives, and this is despite League of Legends status as the top pro game on a global level. The truth is that even with $600 million on the table from endorsements and ticket sales, games like League of Legends make more money from their casual players. And the competitive scene fuels the excitement — and the spending habits — of those gamers.

E-sports as marketing is actually how it works for pro gamers as well.

“While top players can earn million in prizes, only 40 percent of professional players make a living off of gaming,” wrote van Dreunen. “Since prize pools only go to a small portion of teams, most players earn a modest salary ranging from $12,000 to $40,000 a year.”

Instead, most players are looking to make a name for themselves in major tournaments so that they can then go and build an audience on more lucrative video platforms like MLG.tv, Twitch, and YouTube.

“In 2014, professional League of Legends player Wei ‘CaoMei’ Han-Dong retired from e-sports and signed a contract with ZhanQi TV to stream 90 hours a month in exchange for an annual salary of [over $800,000],” reads the SuperData report.

For now, player contracts remain tiny — and in some cases include no guaranteed money. And that’s because most of the money goes to the leagues, publishers, and venues putting on the events. In North American-only events, e-sports competitions are expected to generate around $143 million. Only around $11.8 million of that will go into prize pools. Beyond that, merchandising will generate around $11 million in revenue, ticket sales will bring in $4.5 million, and event sponsorships will generate $111 million.

“Brand owners and advertisers are expected to adapt to emergent forms of entertainment, which will grow sponsorship deals across the segment,” reads the report. “We anticipate an increase in ad spending by consumer packaged goods, automotive and technology brands.”

That means probably a lot more money for publishers and a bigger presence for companies like Coca-Cola and American Express, but it won’t necessarily mean sturdier salaries for the players.