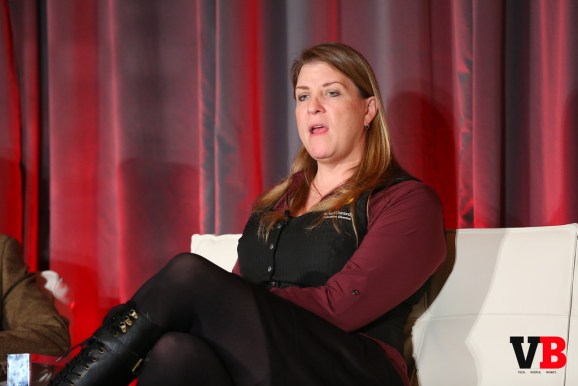 Kate Edwards discusses the fallout of the #GamerGate campaign during the GamesBeat Summit.

The writer of this story has previously been a member of the IGDA. He no longer is. –Ed.

SAUSALITO, Calif — The effects of Gamergate took center stage during the second day of the GamesBeat Summit. While portions of the vocal campaign have harassed and threatened a lot of game developers despite the larger campaign’s claims of being against unethical games journalism, International Game Developers Association executive director Kate Edwards also noted the biggest and most positive impact it’s had on the industry: forcing a dialogue on the issue of diversity.

“Many of us in this industry have been this dialogue for decades … and nothing has come of it,” said Edwards. “I go to many women-focused conventions around the world, and it’s still viewed as the ‘token women issues’ event. You go off and have your conversation on diversity and then come back and we can have a bigger conversation about production.”

Sexism was the second (within the industry) and fourth (within the content) biggest issues in the most recent of the IGDA’s yearly polling of industry perception, making this more than just a liberal talking point. Working conditions was the top concern, and the perception of violence was third. Edwards cited unspecified studies that stated while women make up approximately 50 percent of the gaming audience, they compose only 20 percent of those making them.

The key to industry maturation

“If you want more diversity in your game content,” Edwards said. “You need to get more diverse staff to create that content.”

A “key to maturation” for the industry, according to Edwards, was the capability for content creators to speak out against industry trends or campaigns like Gamergate. The businesses that threatened to remove their services in the wake of Indiana’s original passing of their Religious Freedom Restoration Act earlier this year were an example — which moderator Stewart Rogers of VB Insight brought up — of that dynamic in action. Game makers, especially those operating independently of major publishers, didn’t seem to Edwards to have that same security.

“One of the reasons people don’t speak out is that they are easy targets,” said Edwards. “They don’t have the corporate structure to support them against harassment. And with many of them relying on Twitter, all you need is to have your feed infected [to lose business.]”

Edwards did reference Riot Games as an example of helping reduce harassment within their worldwide hit, League of Legends. The IGDA awarded the studio at March’s Game Developers Conference for its work in calling out abusive behavior in its multitplayer online battle arena (MOBA) game. Edwards praised Riot as “brilliant” for the campaign, but she noted that most companies — even those with larger user bases and revenue — were skittish about speaking out in either direction.

“That frustration – the feeling that there is no solidarity in the industry, is hard,” Edwards said. “We are talking about our users, about our consumers. But I saw a lot of irrational fear. ‘I don’t want to upset the GG crowd.’ But your user base is huge. It’s something that companies have to weigh.”

Honoring those that want to pander 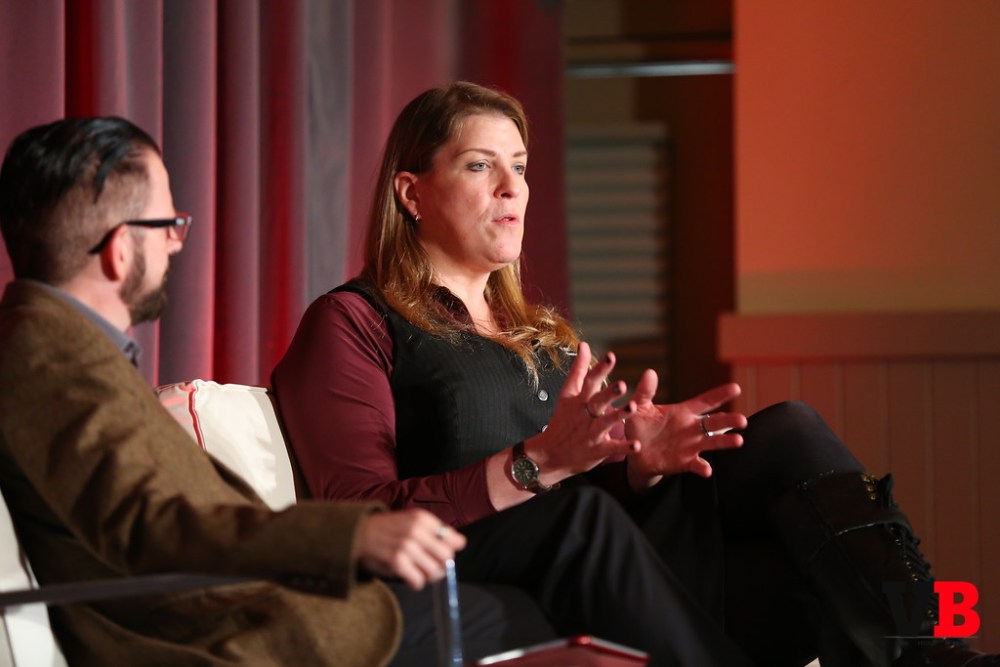 Above: You can create any content you want, agreed Kate Edwards, but you are still subject to market forces.

When prompted with the idea of a developer that wants to create content to appease the adolescent male demographic, using sexualized depictions of women as a purposeful aesthetic decision, Edwards agreed that they should be allowed to do so. She then brought up the counterpoint that content creation does not exist in a vacuum, and the question of why a design decision is being made should always be a consideration.

“Games are an art form as viable as painting, literature, and everything else,” said Edwards. “The creative drive creators have should be honored. The major ‘but’ in that statement is that you have to realize why you are producing that content. Are you making a statement? And if you want to create ‘that kind of game,’ you will be subject to market forces. Do you want to be the developer that gets pegged for that?”

Hiring and wooing women to games

A conversation then began between Edwards and Atari founder Nolan Bushnell in regard to the hiring of women in the industry. Bushnell noted that actually bringing women on game design teams was difficult, with some of his listings for programmers and the like getting a 100 percent male response. This brought up how to encourage young women to continue to show interest in technical fields throughout their educational life.

“What we see is around junior high — without things to keep them engaged against social [gender] pressures, women lose interest,” Edwards said. “… That pipeline needs to be fixed. What we are trying to do right now is to build a great road map, with periods of retention and attraction for women in the industry.

“In the last five years, we have seen an explosion of STEM [science, technology, engineering, and math] programs … [but] there may be a program out East that doesn’t speak to the program in the West. How … we connect them is key.”

But maintaining design interest in women is only one half of the human resources equation. Edwards, mentioning sociological surveys but not direct citing any specifically, described how the status quo manifests in terms of hiring managers. In the wake of industry discussions of diversity, Edwards described, there has been a segment of the population believing the issue is irrelevant to them.

“If a person is of the dominant gender, the dominant skin color, [they] believe this issue doesn’t affect them,” said Edwards. “So being aware of the issue is No. 1. We know, from sociological studies, that when it comes to that kernel of hiring decision, managers, when looking at three candidates … tend to choose the person like them.”

The belief that hiring diverse candidates would disrupt existing team cohesion is also, according to Edwards, disproved by a lot of anthropological studies. It has become the IGDA’s goal, in response to many of these trends, to double the amount of women and people of color within the industry in the next 10 years.