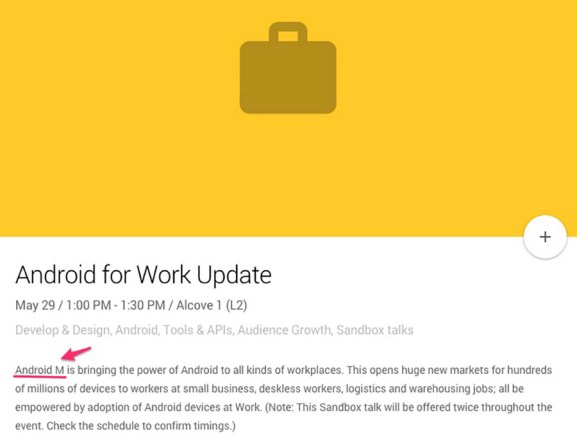 There’s more evidence today that Google will unveil the latest version of its Android mobile operating system — Android M — at its Google I/O developer event May 28 in San Francisco.

Several publications today took note of an I/O session in the conference agenda that makes specific mention of “Android M.” The session description has now been taken down.

The session description, however, suggested that there may be a significant new feature set dedicated to using Android in the workplace. Google will bring the “power of Android to all kinds of workplaces,” it read.

Google has long been expected to announce the M version of Android at the event, but not much is known about the OS.

What Google ought to put in the new OS is more obvious. It’s likely we’ll see a tighter integration in the OS with the Google Fit health data platform and with the Google Now digital assistant. Users have cried out for improvements to the messaging hub, gesture controls, power-saving modes, and for better syncing and control of notifications across devices.

At I/O in 2014 Google talked up its new Android L OS, which eventually became known as Lollipop. So the M OS will eventually get some cute, sugary name too. Lollipop was officially introduced in the wild in November of last year, and a similar winter release date is likely for M.