The market value of mobile Internet unicorns — software companies valued at $1 billion or more by public or private investors — hit $575 billion in the first quarter of 2015.

The firm identified unicorns in 17 mobile Internet sectors, with a total valuation of $575 billion (or $355 billion, excluding Facebook).

The sectors include: Facebook (38 percent of total value), followed by other social networking (17 percent), travel/transport (11 percent), and m-commerce (10 percent). Messaging, games, utilities, food and drink, music, lifestyle, and entertainment each delivered between 1 percent and 10 percent of value, Digi-Capital said.

Enterprise mobility, app store/distribution, tech, advertising, navigation, photo and video, and productivity combined were worth less than 2 percent of the total. 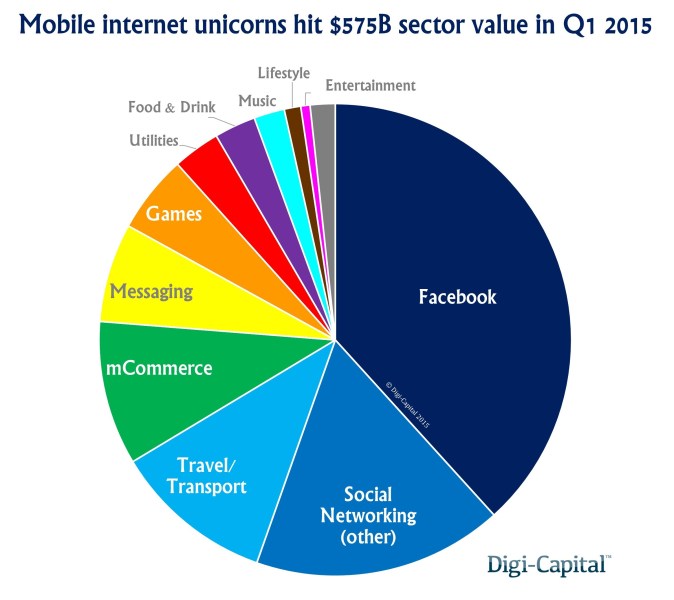 And unicorns, it turns out, tend to be born in the U.S.A.

“If you thought distribution by sector was uneven, hold on to your Stetson,” said Digi-Capital managing director Tim Merel in a statement. “American companies represented a massive three quarters of the value of mobile Internet unicorns globally, as well as a third of volume.”

Digi-Capital said mobile Internet unicorns added $65 billion in shareholder value in the first 3 months of 2015, or $725 million dollars a day.