Bandai Namco’s delays were like caution flags that prevented Project Cars from spinning out on a rain-covered track.

The publisher pushed back Project Cars multiple times, and builds of the racing sim had serious issues as recently as a few months ago. But the release version, while perhaps not the overly hyped perfection people hoped it would be, is a respectable, gorgeous game with a substantial amount of tuning depth.

It launches tomorrow from Bandai and U.K. developer Slightly Mad Studios for PlayStation 4, Xbox One, and PC for $60. I reviewed the PC version using a PS3 controller. 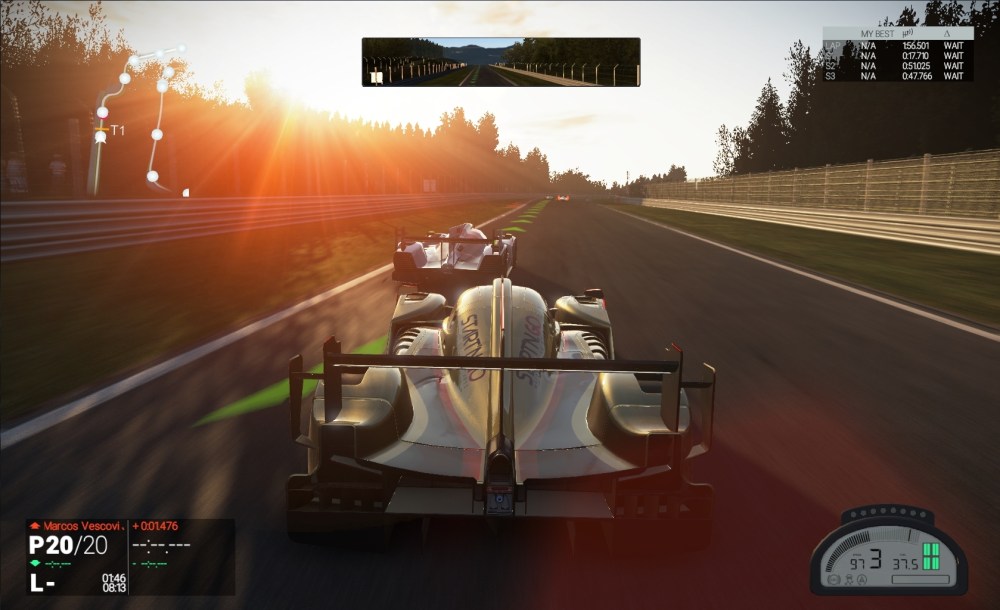 Above: Sunlight so striking it’ll affect your driving.

The graphics in the PC version of Project Cars are stunning. The landscapes shimmer with intricate detail, the dynamic reflections in the hood of your car are mesmerizing, and even the detailed, leather-clad arm of your driver is hard to look away from as you downshift into a turn.

But the weather effects are the best I’ve ever seen in a racing sim, and I’ve driven in almost all of them. Rain not only changes the lighting and reflection on the vehicles, but the drops also splash and run on your windshield. The look of the sun on a cloudy day is different than on a partially cloudy one, and fog adds just the right of obscurity to distant objects.

The clouds alone caused me to stop in the middle of one track to watch them. Light wispy ones drift by in higher winds, and puffy ones fill the sky in heavier cloud conditions. They respond to the position of the sun and refract light in real time. Project Cars may not be the best racing game ever, but it’s one of the best cloud sims in the genre. 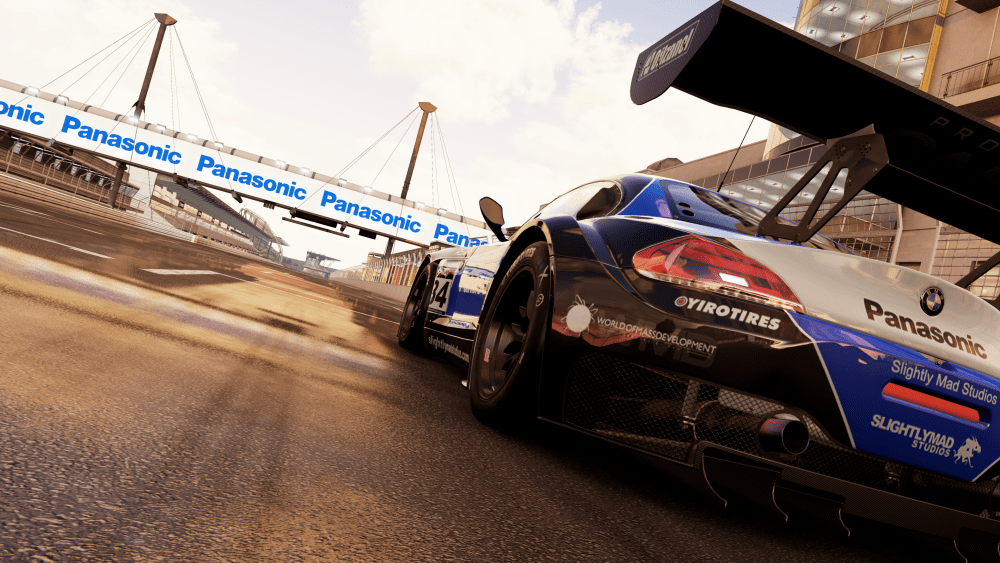 Above: Tear your attention away from the gorgeous car and the wet asphalt and check out those realistic clouds.

Scattered sunbeams aren’t the only things to like about the weather. Early versions of Project Cars were overly touchy during wet-track conditions, but the final version gets that balance just right, at least versus the dry-track version.

The other weather acts as a surprising factor even when it doesn’t affect the track. The late-afternoon sun in Dubai can be blinding, and the English fog can actually affect the way you see and plan upcoming corners.

I used to think there was a limit to how much PC graphics could improve a racing game for anything except the beauty factor. Project Cars makes the case that there are still new types of realism that graphics can help us to experience in-game. 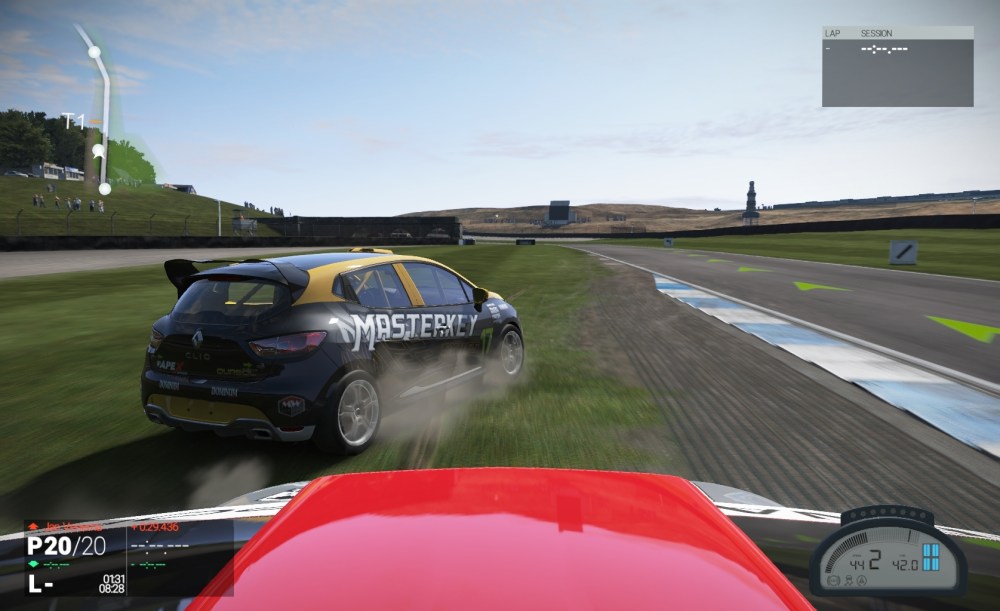 Above: Neither that Clio or my own are going to win this race, but just look at the dust (and the dynamic reflections on my hood).

Every car and track is different

Project Cars has more than 110 courses in more than 30 locations. Each set of tracks has its own unique feel, and even a cursory look at the scenery of the real-world locations shows you how closely the team followed actual geography and course changes.

The tracks are fun, and while you won’t see a lot of audience participation, you also won’t have much to distract from your enjoyment of your car, the open road, and your competition. 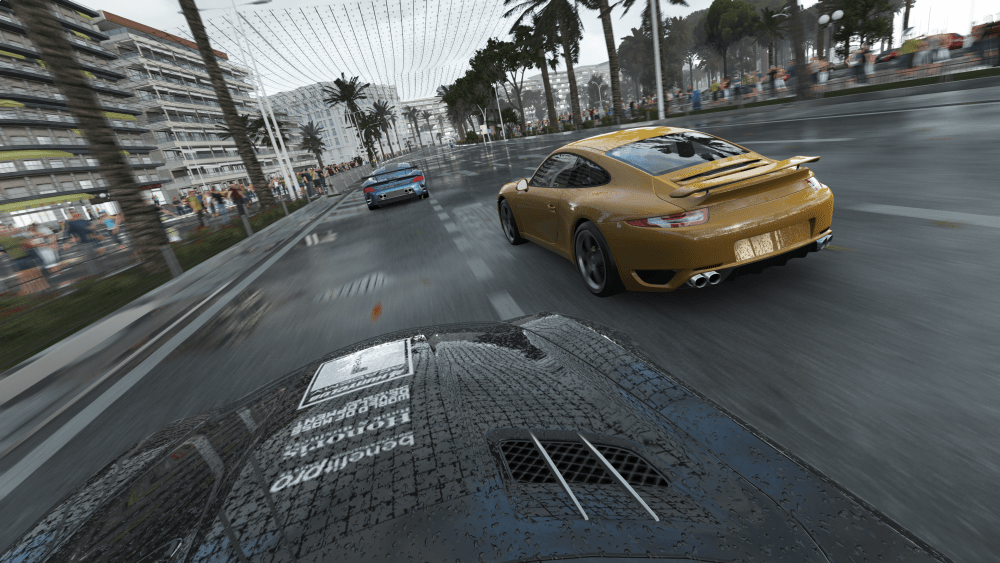 Above: A city course like this one offers buildings from the actual location.

The 80 starter cars are equally varied. While that doesn’t approach the number included in some earlier racing games — Forza Motorsport 5 had over 200, for example — these are all unapologetically racers, including retro tourers and supercars, open-wheels and Le Mans prototypes.

In one of the better features of the game, each class drives with a unique, incredibly true feel. Cornering with a Renault Clio in the touring class is a world away from taking a turn at speed with a Le Mans Prototype. On racers with high-end wheels, how you corner at the start will be noticeably different than how you will at the end of a lap, as those slicks heat up and settle in. It’s pretty stunning. 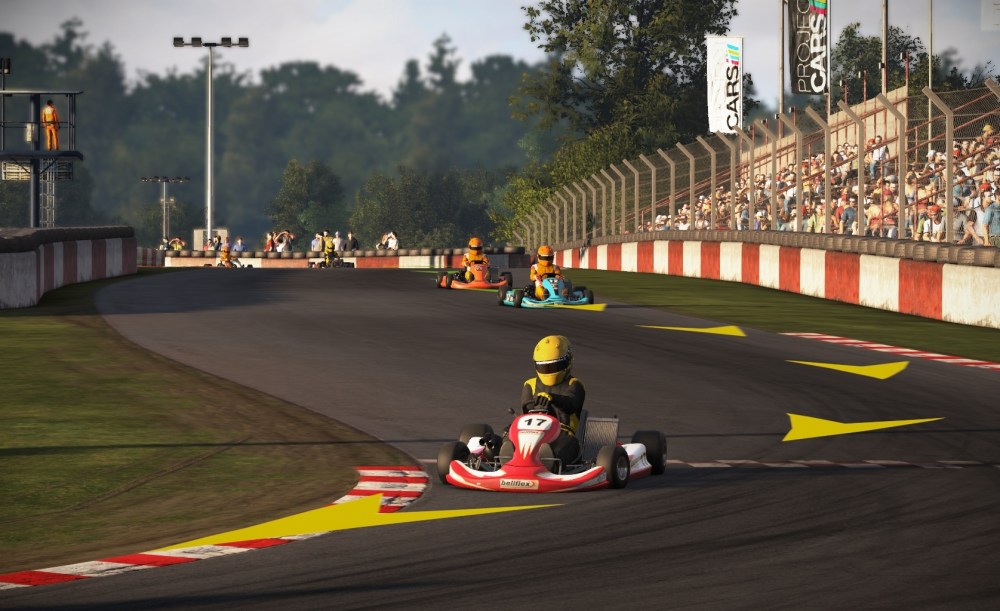 Go go go with those karts

I’ll confess to being a little skeptical of the inclusion of go kart racing in Project Cars. You can choose from 16 different race clusters, and it feels a little odd to instantly have the choice between a Mercedes SLS AMG in the touring series, a Formula racing car, and … a go kart like the ones you take your kids to ride in on a Friday night.

But it took only a few races to establish the Go Kart circuit as one of my favorites in the game. The karts themselves are perfectly rendered, the open cockpit means the terrific graphics for kart and driver are even more on display, and the driving is on-a-dime responsive. Unlike other racers, you can drive up over the ramp-like backs of your competitors here, usually to bad (but hilarious) effect.

These little speedsters start and stop and corner on a pin, and if they could only offer the gravity-shifting jolts of the real thing, they’d be every bit as fun. Project Cars does great justice to all its vehicles, but the karts turn out to be a surprising star in this show. 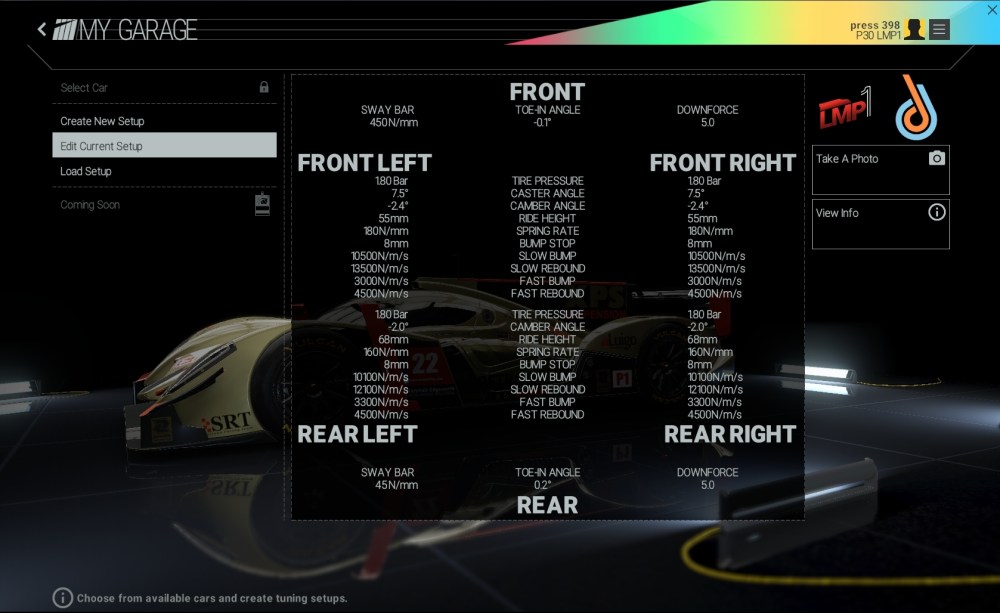 Above: Yes, sim fans, This is heaven.

Project Cars is a sim, and if you enjoy turning those dials, you’ll have a multitude to play with. Even the “take a picture of my car” menu has six settings to tweak, plus filters. You can adjust a screenful of settings for the car itself, such as toe-in, ride height, and tire pressure.

You don’t buy parts to add; instead, you have direct control over the car and its performance. You also control how demanding the track is for factors including damage, tire wear, and fuel consumption. The game encourages you to tweak those settings to find the ride you like, and you could easily spend an evening getting a single car just right.

Even minor changes to car settings make a discernible difference on the track, and in some places, those settings combined make the difference between a challenging-but-fun race and utter disaster.

The game itself offers similar levels of customization: Change your HUD, your controls, your camera, or your experience down to the smallest detail. Default settings are fine, but you don’t have to settle for them if you like a custom dashboard. 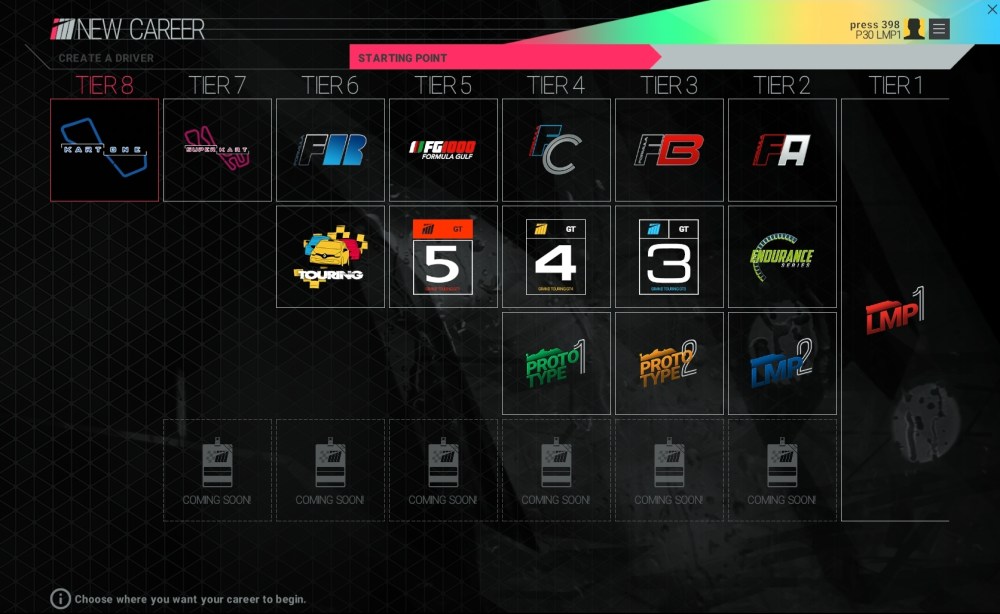 Above: This is the opening screen, with zero playtime. All these choices are yours immediately.

It’s all yours, right from the start

Unlike the typical racing sim where you claw your way up the standings to get the cars that could have easily beaten the races you just struggled with, Project Cars offers you every circuit from the moment you start the game. You “sign on” with a team from a particular type of race, and work your way through those races, getting invitations along the way to participate in other series.

But if you want to race in something different, all you have to do is create a new driver, and off you go in a new car and a new set of courses. (It’d be nice if they let you switch after you started, but Project Cars is just a little too attached to its realism for that.)