A new e-bike that claims to be the safest bike in the world may have failed to meet its $75,000 crowdfunding target on Indiegogo, but it’s all systems go anyway as the inventor pushes on to bring his creation to market.

The Babel bike breaks the norms that people have become accustomed to ever since the Penny Farthing made way for the so-called “safety bicycle” design that emerged in the 1880s. Indeed, the general “format” of the humble bike hasn’t really changed all that much since, from a safety perspective at least, and this is something London inventor Crispin Sinclair is looking to change.

VentureBeat was privy to a “hands-on” with a prototype of the Babel, though we weren’t allowed to ride it. Visually, the Babel is a striking piece of kit, one that immediately stands out for its curious aesthetics.

The version we saw was a replica with a plastic frame, but it did give some inkling of what to expect when the full aluminum version hits the market. Basically, you sit in a little safety “cage” that can take the impact from vehicles. Oh, and you wear a seatbelt too. 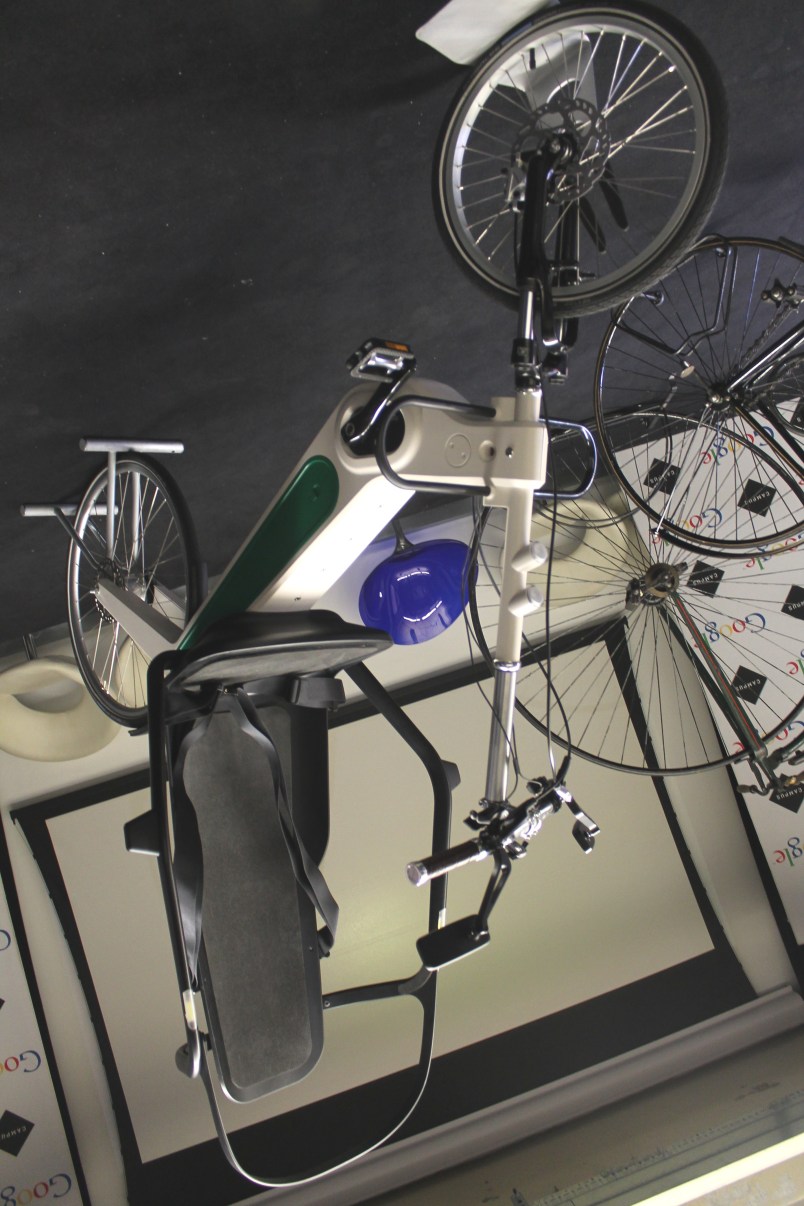 There are many additional safety and security features built into the bike too, including rear-view mirrors, front and rear lights, an alarm, brake lights, indicators, hazard flashers, and a very loud horn.

There’s also an on-board charging cradle for your phone, which can be used for GPS navigation or as a front-facing camera a la GoPro. 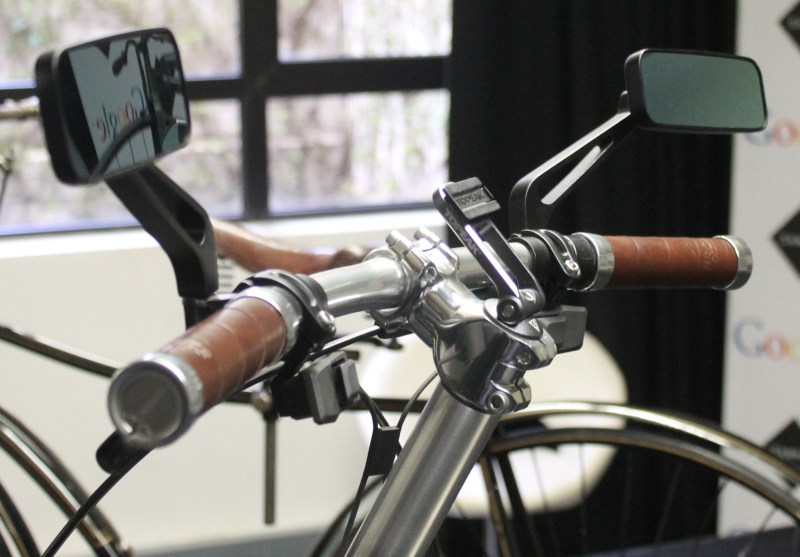 Elsewhere, there’s a built-in bicycle lock, the wheels are locked to the frame, and the chain, motor, and other components are located inside the frame. 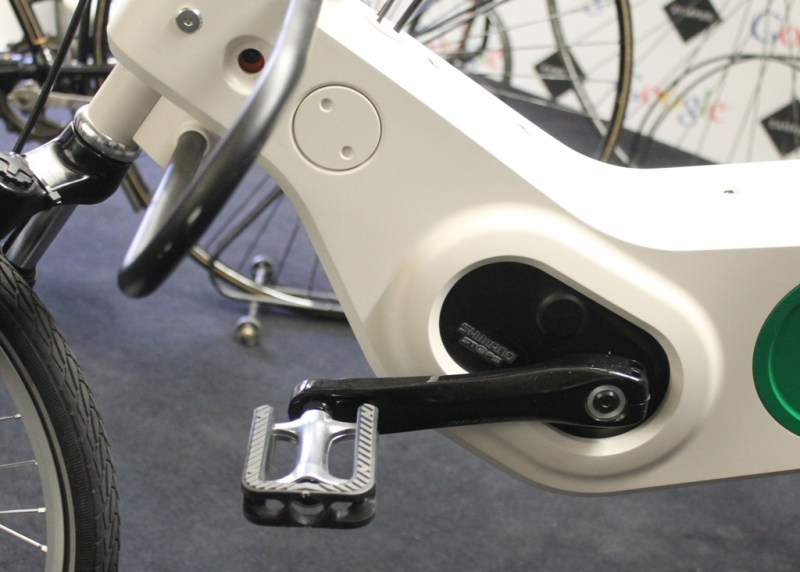 There are two versions of the bike: a cheaper pedal-only bike and an electric version. On the latter, there is an “assist motor” designed to aid your pedaling, rather than power the bike completely. So there is no throttle here; you just have to keep on cycling and the motor senses your efforts. It can add as much as 30 percent more power to the mix, which will help when climbing hills.

“The idea is you’re on the bike because you want the exercise,” said the bike’s creator, Crispin Sinclair, in an interview with VentureBeat. So the Babel doesn’t deprive you of this.

The lithium-ion Shimano battery can be removed and charged in your house, or you can plug the bike into a public charging point for electric cars. Sinclair says you can get around 60 to 80 miles per 4-hour charge, but that’s with you pedaling simultaneously, so it really depends on how much effort you’re putting in.

In terms of costs, there are a few options here. The full, non-subsidized price of the pedal-only version is expected to be around £2,000 ($3,000), while the motorized incarnation will be £3,000 ($4,500). Given the hefty price tag, there will also be a subscription payment scheme where someone could pay, say, £60 ($90) each month, and at the end of a three-year period they could buy the bike outright for a set fee or return the bike. In the U.K., there will also be a subsidized option available under the government’s cycle-to-work scheme.

The size of the Babel is particularly notable — it just seems very bulky. While some compromises must of course be made when building a bike with safety in mind, the fact that it’s being pitched largely at commuters and city cyclists means the size could deter many from considering it. For example, the Babel can’t be carted onto a train at the best of times, let alone during prime-time rush hour when possessing even a slightly oversized bag can land you in your fellow passengers’ bad books. The Babel is designed to be “parked,” not portable.

There is a huge market for compact bikes — this has been proven by the likes of Brompton, a London-based company that sells foldable bikes in their droves. These are perfect for commuters who can cycle to the station, fold their bike up, climb aboard the 07:45 to King’s Cross, then cycle to their office at the other end. The market for e-bikes too is growing, powered by companies such as Smart, where sales are surging in Europe.

A few weeks back we looked at the Jivr, a folding, chainless e-bike that’s setting out to revolutionize city cycling. It will cost £2,000 ($3,000) when it goes to market, and at around $1,500 less than the motorized version of the Babel, it may prove more appealing to the average commuter.

However, the safety element of the Babel should not be underestimated. A perennial problem for cyclists around the world is road hazards such as buses, cars, and trucks. In the U.S. alone, 722 cyclists died in crashes in 2012, a 16 percent rise over 2010. And that doesn’t include those who were seriously injured.

As such, the folks at Babel have been carrying out some fairly extensive safety testing.

“This is the biggest step forward in bicycle safety for 130 years,” said Sinclair. “It’s the world’s safest bike, and it’s also the world’s most security-conscious bike.”

There has been a rise in innovations in the area of cycle safety in recent years. Earlier this year, for example, GPS navigation company Garmin acquired iKubu, a startup that’s built a radar that can be retrofitted to bikes to tell cyclists the speed and distance of vehicles approaching from behind. While seatbelts and “cages” no doubt bring additional security to the mix, for most people the price point and practicalities of the Babel may be prohibitive.

No launch date has been given for the Babel yet.