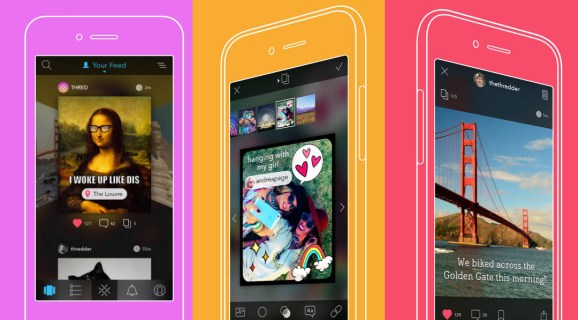 Will Wright isn’t making a game anymore. He’s doing something different, but he’s still the same Wright that made The Sims and SimCity. And the things that made those games so successful are also a big part of the app he’s launching now.

Thred is a startup out of Berkeley that Will Wright founded in 2013, and it is also the name of the app that is going live on iOS today. It’s a content platform that provides you ways to quickly consume information in a way that was built specifically for smartphone devices. But it’s not just about consuming. It’s also about creating and sharing with other people. And it’s in this aspect of Thred that it’s easiest to see Wright’s obsession with designing technology that empowers people to tell their own stories. That was spark that powered The Sims, Spore, and SimCity, and now with Thred, Wright wants to enable a whole new generation of people to make their own fun.

“Thred is kind of an intersection of a couple things,” Wright told GamesBeat. “One of them is my interest in user communities to create stuff. You give them high-leverage tools, and they kind of become creative communities. They start to share stuff. That’s what happened with Spore and The Sims. And to me, the communities themselves were actually the end product, and the games were just a tool to create the communities.”

He’s seen this happen before. People who obsessively played games like The Sims were actually just as engaged in interacting with the community around the game as well. They’d spend an hour playing and then three hours talking with others about what they did.

“At the same time, this phone in my pocket has kinda become my primary computing platform,” Wright said. “Most of the stuff I’m consuming is on this device, but it is also mostly legacy content. It’s webpages. I’m trying to zoom in and touch on tiny little links. And I’ve felt like there hasn’t really been a form of content that was designed specifically for [touch-screen phones]. That’s where we started with Thred.”

The goal of Thred from very early on was to make an app that very simple but also very powerful. It uses panels that people can connect together to share ideas, recipes, or whatever else that interests them. Primarily, they are visual. Let’s say you want to talk about your vacation. You can start a thread by using your location, and the Thred app may automatically use a picture of the hotel you’re staying at. You can then use more searches, links, or pictures from your device to quickly add more panels. This makes it easy to quickly string together ideas, and it simplifies navigation for the people consuming what you share.

“The browsability was a big deal,” said Wright. “The idea is that at Starbucks you can sit there with one hand and easily tap through a thread. I want to be able to very quickly dive in and out of content.”

That means Thred also has all the social features you would expect. You can follow people, sort through hashtags, and subscribe to certain topics. Once you get comfortable browsing and consuming content, Wright expects most people to quickly move on to making and sharing their own moments.

Starting a thread is easy.

The bottom of the Thred app looks a bit like Instagram. Hitting the middle button will bring up the options for you to start creating. Right now, to start your own post, you can use a web search, a photo, or your location.

Once you have a panel based on the topic you want to talk about, you can quickly and easily start editing it in a really powerful way. This includes filters and stickers. You can even add avatars and text boxes. And this leads to one of the coolest ways you can use Thred right now, which is making your own comics.

Wright showed me a comic he made about the Sputnik satellite complete with characters and speech bubbles. The process is as simple as searching for an image and then popping the various stickers and avatars onto the scene. You can then pinch and move the items around to resize and place them to exactly your liking.

But you’re also not stuck using the provided stickers. If you need something specific that the app doesn’t already have, you can use a search button to create your own stickers. Searching for a horse will do a web search for a horse that you can paste into your scene.

It’s all about enabling you to share your personalized stories.

One of the other buttons at the bottom is called “my day,” and it lets you go back and access things you’ve done with your device in the past. For example, you can instantly see days where you took a lot of pictures and start working with that to create a story to share with friends.

All of this is kind of similar to the way Google+ handles photos and videos with its Auto Awesome feature. The difference is that Google+ handles nearly everything for you to make videos and collages while Thred gives you simple tools that make it almost no effort to design your own stories.

For Wright, turning over authorship to the people using Thred is important.

“We can measure the external things happening to you,” Wright said. “We can count the number of photos you took or the locations you’re at. But it only really gets interesting when we start exposing what’s going on internally. Seeing the number of photos you took is provocation to say what was going on in your head. To say why you did something or went somewhere. We want to provoke a story out of the user by giving half of it to them and having them fill in the half that we can’t see.”

The Thred star and making money

A creation platform like this has a lot of potential, and Wright can already see it ending up like YouTube, complete with Thred stars that gain attention for their high-quality posts.

“With stuff like hashtags, people will create a hashtag and own that conversation,” he said.

It was easy to see this. The handful of threads that Wright created were already impressive, and I’d want to follow him just to see what he was going to share next.

And that leads naturally into the question of how brands will use Thred and how the app will make money. For the first question, Wright says he could see them making their own accounts and hashtags to share stories about their products, but that’s not something Thred is looking to make money from right now.

“We’re not really even worrying about monetization right now,” said Wright. “We’re worried about the experience and user acquisition. Our advisers have given us that freedom. We’ll have plenty of opportunities if people end up using it.”

And I can’t imagine people not using it.

The only problem I spotted at this point is that Thred has so much going on that it’s hard to pin down exactly what it’s best at. This is something that Wright acknowledges. We talked at length about making comics with the panel editor, but that could do so much more that we didn’t even touch on.

It felt like one of those interviews where I think I have a decent grasp on what the product is and how people will use it, but then the community’s creativity is going to blow me away with all the interesting things they’ll do that I didn’t even think of.

I told Wright about that concern. He laughed and said, “That’ll be especially true for me.”