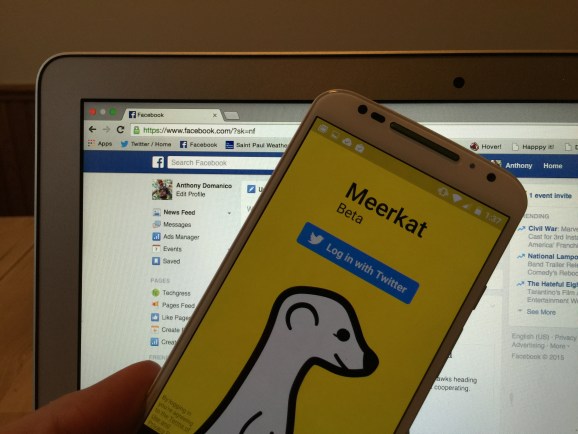 Meerkat’s recent move to support sharing its live videos on Facebook was a necessary one for the young startup. But what does Meerkat’s arrival mean for Facebook users?

The change came after Twitter shut down Meerkat’s access to Twitter’s social graph, a move that paved the way for Twitter’s own livestreaming app — Periscope — to take off with Twitter’s 200 million+ users. If Twitter’s not open to Meerkat, maybe Facebook will be.

But the move opens a lot of questions. Thus far, Facebookers haven’t signed up for livestreaming services like Meerkat or Periscope — will they start now? Will their feeds start to be flooded with livestreams that, like all other videos on Facebook, auto-play until you turn that setting off? Will Facebook embrace the Meerkat service and promote it across the Facebook platform or acquire it outright?

I reached out to my Facebook friends to test Meerkat as a concept, and whether they’d even want to use a livestreaming service at all. Most didn’t, as even though many of them are far away from their family members (I have several friends who have relocated for work and a handful of military families who have members overseas), they’d much rather connect over one-to-one video messaging — either on FaceTime, Skype or Facebook’s own Messenger app — than broadcast their events with every single one of their Facebook friends.

Though it was a pretty small sample size, their responses seem pretty representative of many Facebook users, and highlights the differences between Facebook and Twitter as social networks. Facebook tends to be reserved for more close relationships — mostly with friends, family and some acquaintances — whereas people on Twitter seem to connect with anyone they find interesting, regardless of whether they’ve ever met face to face.

Brands will use it, naturally. Because brands will be brands and they will brand at you as long as you’ll let them.

As a result, your Facebook feed isn’t likely to be overloaded with Meerkat videos anytime soon. Sure, the people who overshare pictures and videos of their kids, dogs or whatever else they’re into might sign up and start sharing live videos as well, but most people will likely reserve their Meerkat-ing for bigger, more meaningful things like a child’s high school graduation or an important sporting event so friends and family from out of town can feel more connected, even if they’re not right there with you.

We asked Facebook if it had any livestreaming plans, be it building a service of its own or considering a Meerkat acquisition, but the company declined to comment.

We reached out to Meerkat to see what their longer term plans were for Facebook integration, but haven’t heard back yet. We will update this post once we learn more from the company.

Suffice it to say that while brands will likely begin selectively using Meerkat in their promotional materials, your friends, family members, and acquaintances on Facebook probably won’t start using it en masse anytime soon. At least, not enough to significantly change your news feed.