Truecaller has revealed the next step in its quest to banish unwanted or nuisance phone calls — the Swedish startup has announced a global partnership with Cyanogen to preinstall its technology on Android handsets. 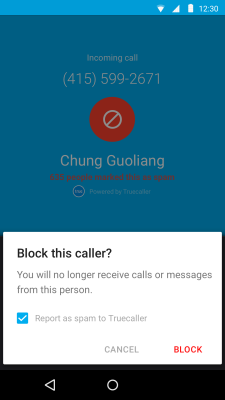 If you’re new to Truecaller, it can best be likened to a crowdsourced telephone directory, one that lets users flag spam callers to the community or put a name to a number so that anyone else who has the app installed can see instantly who’s calling them. The app has more than 100 million downloads to date.

While Truecaller has previously signed deals to preload the app with a number of manufacturers, including Nokia/Microsoft, Alcatel, Lenovo, and LG, this is the first time the company will integrate its technology directly into an operating system. 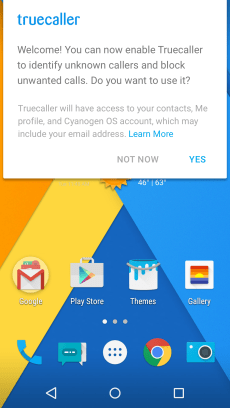 The partnership with Cyanogen will see Truecaller’s spam-blocking and caller ID features integrated into the Cyanogen OS dialer on all future devices that ship with the operating system installed. Those who already have a Cyanogen OS-powered device will receive an over-the-air (OTA) update “in the coming months.”

It’s worth noting here that the feature is entirely opt-in, with users asked during the phone’s setup whether they would like to activate Truecaller.

Cyanogen is the company behind the popular open-source Android-based operating system called CyanogenMod, which can be downloaded and installed by anyone with a compatible handset. Cyanogen OS is similar, but it’s the commercial spin-off that’s preinstalled as the default operating system by an increasing number of original equipment manufacturers (OEMs), including OnePlus, Micromax, Oppo, and Alcatel — the recent Nokia acquisition.

Given that Cyanogen’s core raison d’être is to offer tweaks, enhancements, and improvements over the main “stock” Android experience, building something like Truecaller into the core of the operating system does make sense. For Cyanogen diehards who may criticize this move as adding extra unwanted “bloat” to the OS, well, they’ll be pleased to know that it doesn’t actually affect the main open-source CyanogenMod version of the software.

There is other similar software out there already, including Facebook’s very own Hello app for Android, which launched in the U.S. just a few weeks back. Truecaller, however, is probably the best-known spam-blocking/caller ID app out there, and the company has received north of $80 million in funding since its inception in 2009, the bulk of which came just eight months ago.

For those not using a Cyanogen OS device, Truecaller is available as a downloadable app for most Android, iOS, or Windows Phone handsets.