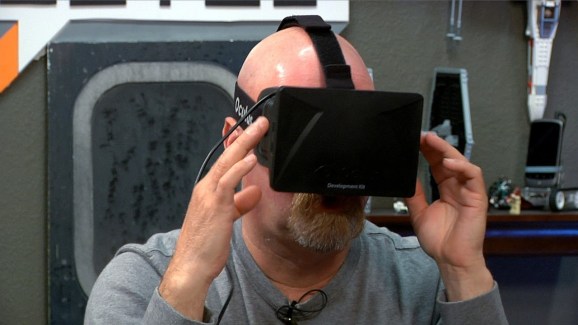 Jamie Hyneman of "Mythbusters" wearing an Oculus Rift on a Tested.com podcast.

I hope you are ready to enter the world of the Mythbusters.

Discovery Digital Networks, the company responsible for the Discovery Channel, revealed this week that it is starting a way for people to consume its content in virtual reality (via AdWeek). Called Discovery Virtual, this new initiative will enable people who own head-mounted displays like the Oculus Rift or HTC Vive to get a new perspective on certain shows. And Mythbusters, the long-running science-based program starring Jamie Hyneman and Adam Savage is already filming in a VR-compatible format. We’ve reached out to Discover for more on how this will work.

“This is one of our most innovative moves in the next year, period, across the company,” Discovery Digital Studios senior vice president Conal Byrne said during a presentation at the company’s annual meeting with brands and advertisers. “We believe VR will fundamentally change the way that fans connect with our content. When you experience VR, it is like seeing the future. It is digital media at its very best.”

This starts to answer the question of what kind of content people who invest early in VR devices will have access to. Mythbusters is just one show, but Discovery says its planning to film several other programs with VR-capable cameras.

This puts Discovery on the very edge of the VR format. Truthfully, virtual reality isn’t a viable market yet. The products that have the chance to change the industry haven’t even go on sale, but Mythbusters and Discovery will potentially have content ready to go when people first start picking up their HTC Vives this holiday, Oculus Rift’s in Q1 of 2016, and Sony Morpheus in the first half of next year.