An ambitious effort to reinvent mobile advertising is taking place in the Chelsea section of New York City.

The Lab, headed by Yieldmo design chief David Goligorsky and now in its ninth month, is brainstorming the creation of new mobile ad formats that don’t get in the way of the user. So far, according to VP of marketing Luke Tarbi, the efforts of the Lab’s four designers, three developers, and three testers have generated more than two dozen new formats and hundreds of variations. The key formats are shown in their demo page.

“We’re the only company ever to have built an Ad Format Lab,” CEO and cofounder Mike Yavonditte told me. His company is backed by Google Ventures, Time Warner, and Union Square Ventures. 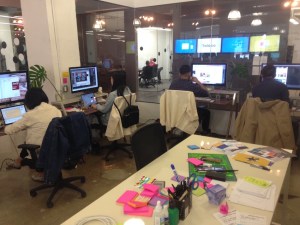 Yieldmo sees itself in a unique position to undertake this mission. It has a mobile ad platform that, serving six billion impressions monthly, acts as a private marketplace for more than 100 premium publishers, including CNN, Reuters, Forbes, Vox, Time, Orbitz, and Univision.

About 90 percent of the ads are served to mobile web, which is where most of these publishers are focused. The rest are ads placed in apps, for which Yieldmo has issued SDKs. All of the ad formats served by Yieldmo are created in its Lab.

But that’s just the playing field. When you speak to the pumped-up Yieldmo-ers like I did the other day, you hear one phrase repeatedly: “code on page.”

That is, Yieldmo has Javascript that opens an iFrame window on many of its publisher clients’ mobile web pages. This in-feed window, invisible to the user, gives the company the space to experiment rather than require that it match some pre-existing model. In apps, the SDK enables a similar window.

“Because we have code on page and our own placement on the pages,” Goligorsky told me, “we can say ‘let’s try it this way’ and see the performance.” A/B testing is a big part of the Lab’s effort, as it claims to conduct 200 million tests daily to see what works best.

For instance, sometimes ads are criticized for tricking people into thinking they are actually content. The Lab tests to see if there’s a big discrepancy between clicks and actual sales for its ads. If there is, that implies the users felt misled — clicking and then backing out — and the ad is redesigned.

The company contends that its ad formats are generating conversion rates that are as much as 1,500 percent higher than regular ad formats. Clickthrough rates are about the same or slightly better, Yieldmo said, but the difference is engaging the user and making the sale.

To get there, Tarbi said, advertisers need to remove any formats that disrupt the user experience.

For Yieldmo, that includes banners, interstitials, popups, and adhesion ad units. Some of those, he noted, are featured in the most visible promoter of new mobile ad formats, the Rising Stars showcase of the Interactive Advertising Bureau (IAB). Tarbi pointed in particular to the Adhesion Banner, where the user has to do something to get away from the ad:

Yieldmo’s approach, he said, starts with formats that enable a user to opt in and decide when to engage.

Several of the Lab’s ad formats are literally user-powered, like Scrolling, Pull, Carousel, and Mainstage:

Scroller was cited by AdExchanger as one of this year’s most innovative, and that kind of user-generated motion is employed in several of Yieldmo’s ad formats.

Formats fit into three families, designed for specific placements in the classic sales funnel. Scrollers, for instance, act to promote awareness at the funnel’s top; Carousels push consideration in the middle; and direct response formats like Ticker or Domino help make the sale.

This summer, the company will begin rolling out tools that allow publishers to populate their own ads in the company’s formats.

Other mobile shops create original ads, but Yieldmo sees its key differentiators being volume and scale: the number of different ad format types it generates and the fact that the company’s mobile ad network is one of the largest out there.

Mobile advertising, like mobile interaction in general, is still a field ripe for innovation. This is not only because it is still a relatively new medium, but because users have gotten very picky about what kinds of ads they spend their attention on.

Which is why user permission and engagement are now the gold standards in general for mobile ads. For instance, two other innovative mobile ad creators take approaches very different from Yieldmo and from each other — Adtile’s sensor-driven ads and Gameit’s video-with-trivia — but they similarly adhere to the idea that users should have choice and control.

In fact, the same principles about user attention should apply to anything on mobile. Someday, one hopes, Yieldmo and its best competitors will have the time and the resources to apply their neurons to creating mobile program content that is as inventive as its ads.