Now you have a second chance to get in on the world saving.

The original Devil Survivor 2 was cheated. It came out near the end of the Nintendo DS life cycle, where gamers were already looking toward to its successor, the Nintendo 3DS. Its predecessor, Devil Survivor for the DS, won praise for its fresh new approach to strategy role-playing games, and it was successful enough to become a comic series. Its followup just came out too late. Despite becoming popular enough to spin-off into a television animation series in Japan, Western gamers mostly missed out.

Four years later, Atlus gives the title the attention it deserved with a rerelease on the Nintendo 3DS, titled Shin Megami Tensei: Devil Survivor 2. This enhanced version brings new features, improved storytelling, and a brand new secondary game that adds another 25 or so hours to the already lengthy (50 or more hours) total play time.

Save the world again

It’s just another normal day at school until you and your friends hear rumors of a secret YouTube-like phone app that shows videos of the particulars of gruesome deaths of everyone you know. Your friends write it off until one video of your own death comes dangerously close to becoming real. Suddenly, disasters strike, ruining Tokyo and other major Japanese metropolitan areas in a flash. Now, the people of Earth only have seven days before mysterious invaders bring about the apocalypse.

Devil Survivor 2 might not have the most original story, but its strong dialogue, memorable characters, and sharp plot twists make it worth having to save the world once more. It’s easy to get wrapped up in its supernatural/technological tale, which seems to blend some of Atlus’s own Persona series and Square Enix’s The World Ends with You in many ways.

A wholly separate secondary game called the Triangulum Arc works as a sort of sequel to the events of the original title, rewinding time to the point just before the original story started to have players saving the world once more, this time from a new threat. But a new story with interesting alternative character situations, as well as new enemies and battles, makes it worth saving the world a second time.

Atlus’s Devil Survivor series blends grid-based tactical play with turn-based fights, making for an engrossing battle system that never lets up adding layers of depth, even in its last fights. This hybrid form has players moving units on an overhead map, tactical style, with encounters bringing players into 3-on-3 fights where smart use of turn order and weakness exploits will lead to victory. It’s like mixing Nintendo’s Fire Emblem with Atlus’s own Persona to make for a more active take on strategy.

Further deepening the fight is the publisher’s Shin Megami Tensei demon system, which lets players summon demons as aides, and mixes in elemental and spiritual considerations to the battle system. Later, more subtle twists add even more complexity, such as the ability to steal extra turns from enemies, or the ability to target enemies to learn specialized skills. 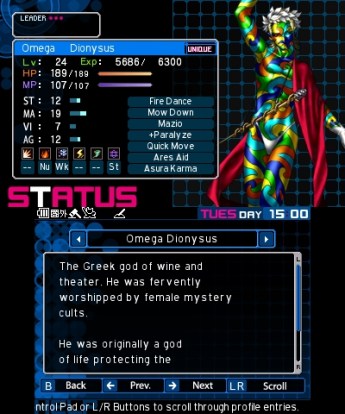 Above: The demons in Devil Survivor 2: Record Breaker are quite colorful.

As you could imagine from a system this deep, battles become complex. It doesn’t help that Atlus likes to keep difficulty levels high. This new version brings about selectable difficulty levels, but even the “Blessed” easy level will put players in tense battles that require careful planning for each and every move. The hard “Apocalypse” difficulty can be infuriating, but it makes eventual victories that much sweeter.

You acquire companion demons via a demon auction app, with new creatures unlocking as the game’s story progresses. Players have 5 seconds to bid on any given demon, going up against up to three other bidders. Come out on top and you’ll earn the right to call upon the demon you’ve won at any time as one of your available team members. This also lets you use the demon in a fusion app to create wholly new ones. It’s not quite Pokémon, but it’s still easy to get wrapped up in the loop of discovering, acquiring, and fusing demons. And all of this is set to the most catchy theme song in the game.

With four available party members, and each commanding up to two demons, Devil Survivor 2 has a possible 12 placements to manage prior to going into battle. Each of the party members have fully customizable skill sets, letting players stack their party for the best possible outcome. Fans of strategy will find joy in the sheer number of options to tweak going into a fight. It’s like the preparation phase is a subgame itself.

The Fate system seems to take inspiration from the social link system of the Persona games, as it also encourages the player to make choices about which friendships and bonds to pursue. Choosing who to spend your downtime between battles with has some added benefits with abilities that unlock at different stages of your relationships. These abilities can make a big difference in battle strategy.

While the original game doesn’t look much different from the 2012 Nintendo DS original, it has plenty of other notable upgrades to appreciate. The entire game has seen the addition of full voice acting, and new animated cutscenes keep things lively. The script has seen some touchups as well. These new additions do a nice job of complementing Record Breaker’s involved story.

The upgrades are even easier to appreciate in the second story arc. While the gameplay keeps its older look, some of the settings are new and are impressive works of pixel art.  Atlus pulled out all of the stops for the story sequences with highly polished animations, which use the top screen to give unique height to the scens, and some of which use the 3DS’s 3D effect as an accent. 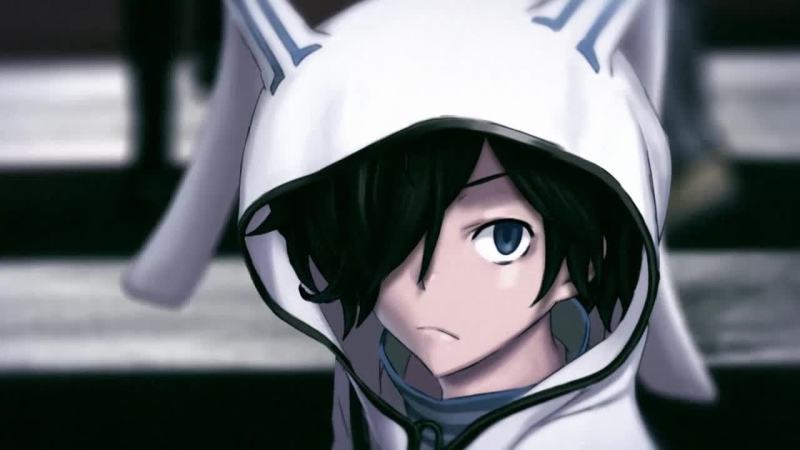 Above: I’ve played this game twice and still don’t get the bunny ear hoodie thing.

Both of the story paths of Devil Survivor 2: Record Breaker are designed in such a way that players going through a normal play progression are going to be up against slightly overpowered enemies, forcing them to use their wits and all available strategies to barely make it out alive. But you will hit a wall and will have to use the available “free battles” to increase character and demon levels to meet some challenges. This arbitrary line serves only as a barrier, and it unnecessarily extends an already long game, and having to repeat stages that are 30 minutes or more in length multiple times is highly frustrating.

The newly available downloadable content for Record Breaker helps out with this situation, adding challenges that allow for faster leveling. 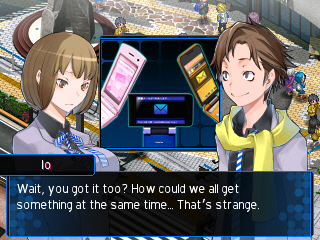 Above: Io’s phone is the least of her problems.

It’s easy to appreciate the varied and colorful cast of Devil Survivor 2, but character designer Suzuhito Yasuda’s approach to the female chest might not be for everybody. Breasts seem to defy gravity, pointing distractingly upward, sometimes even above the collarbone. It’s not necessarily offensive or embarrassing, but maybe just under that mark, especially when it comes to playing this game in public.

While the battle system makes use of both screens, and the new cutscenes pull some really neat tricks across both screens, the top screen remains unused for everything else outside of this. Sometimes a grid pattern glows on the top screen during dialogue segments, but it has no function and only serves to distract from the action.

Devil Survivor 2 was already an enormous game, but Record Breaker nearly doubles up on that with a new epilogue. It also adds new voice acting, some script tweaks, and other enhancements to the original game. It’s not easy, and it’s certainly not short, but Devil Survivor 2: Record Breaker is one of the best strategy role-playing experiences available for the 3DS.

Devil Survivor 2: Record Breaker is now available for the Nintendo 3DS. The publisher provided GamesBeat with a digital code for the purposes of this review.