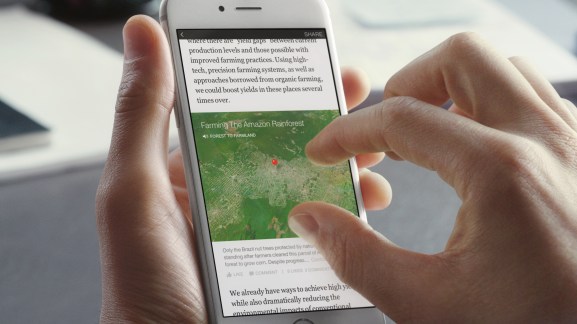 Facebook today announced the details of its new Instant Articles program to shoot publishers’ content directly into Facebook’s flagship app on iPhone, enabling content to show up much faster.

“Along with a faster experience, Instant Articles introduces a suite of interactive features that allow publishers to bring their stories to life in new ways,” Facebook product manager Michael Reckhow wrote in a blog post on the new program. “Zoom in and explore high-resolution photos by tilting your phone. Watch auto-play videos come alive as you scroll through stories. Explore interactive maps, listen to audio captions, and even like and comment on individual parts of an article in-line.”

The program has been rumored for weeks. It’s the next level of Facebook’s embrace with publishers, which have often seen traffic flow to their sites as a result of sharing on the social network. And faster-loading content can also help Facebook improve user engagement — users can happily scroll through articles and then move on, rather than getting frustrated with subpar application performance.

The program could also have implications for Facebook’s infrastructure. Facebook will have to obtain the content before piping it into its app, and that may mean news articles, pictures, and videos will be sent into Facebook’s data centers as soon as publishers can get them out the door. Eventually that content can add up and become another type of material to take up space on hard drives — next to user-generated content and analytics data that Facebook keeps on hand.

Facebook is giving publishers control over “brand experience” with Instant Articles, Reckhow wrote. That means an article from one publisher might not be easily mistaken for content from another publisher. Flipboard, for one, gives publishers the ability to customize the reading experience for their content, and Facebook is doing something similar here.

And when it comes to monetization, Facebook is providing publishers with multiple options.

“Publishers can sell ads in their articles and keep the revenue, or they can choose to use Facebook’s Audience Network to monetize unsold inventory,” Reckhow wrote. “Publishers will also have the ability to track data and traffic through comScore and other analytics tools.”