Today, Twitter released a report conducted by Research Now that tells us something we already knew: People are watching a lot of video on their mobile devices.

In fact, 90 percent of videos viewed on Twitter are being watched on a tablet or smartphone worldwide, according to the report.

But perhaps the piece of data that Twitter finds most valuable in the report is that 70 percent of users watch videos found in their feed. That means people are discovering new video content on Twitter, a key insight for advertisers considering running campaigns on the platform.

People are also engaging with those videos. Twitter says that based on its internal data, native video is capable of driving more two and a half times as many replies and nearly three times as many retweets than third-party videos shared on the platform.

The report goes on to highlight what Twitter users like to view. Half of users like watching sports clips and TV show snippets, while 64 percent are keen to watch breaking news. Naturally, what Twitter says users really want are more videos from celebrities, other users, and brands.

See the infographic below for more statistics. 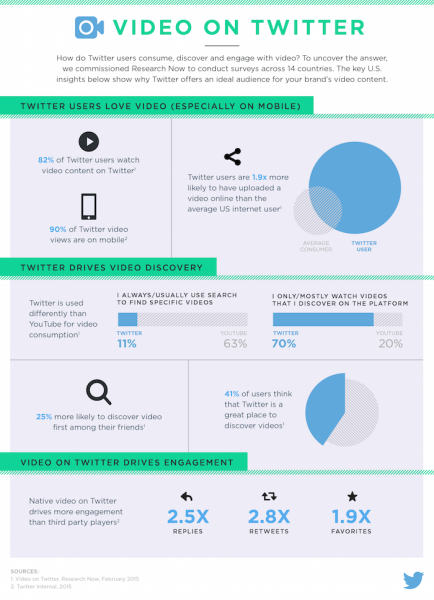