Earlier today, Facebook announced details of its latest attempt to woo publishers — Instant Articles that push content directly into Facebook’s mobile app, designed to let articles load much faster. The first of these is now live on Facebook, so if you’re following The New York Times, you’ll no doubt see this article appear in your feed at some point.

The social network’s latest initiative is the result of a collaboration with nine publishers: The Atlantic, BBC, BuzzFeed, Bild, The Guardian, National Geographic, NBC, Spiegel, and The New York Times. Not all pieces from these publishers will be distributed as an Instant Article at first, however, as it’s still being treated as an experiment of sorts.

Available only in the Facebook iOS app for now, the Instant Article certainly loads much faster based on our tests, and it is pretty slick. It’s as the name suggests — when you click on the article it loads instantly. It has a very “native” feel, with the full article sliding out from the right and the associated video content streamed instantly. 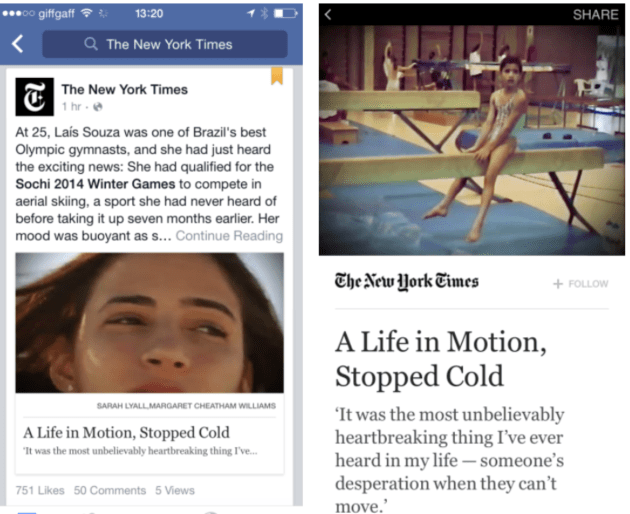 Above: Instant Article: In News Feed vs. full read mode

It’s only one article for now, but it signals the beginning of what could be the new “walled” Facebook reading experience of the future. The social network essentially pipes the content into the app, configured in collaboration with the publisher for the new system.

Facebook says that it’s giving publishers control over the so-called “brand experience,” to help differentiate how the Instant Articles appear in your News Feed. This means that publishers will have a little creative licence to stand out from the competition. It’s kind of similar to what Flipboard permits in its news aggregation app, with publishers able to tailor how the content appears.

It’s also worth noting that there are new “sharing” options available for each Instant Article (h/t Matt Navarra). Through the normal in-app browser that Facebook offers to let you read a full article in your News Feed, you have five options, none of which include Twitter.

As you can see in the comparison screenshots below, with the new Instant Article format, Twitter is in there, as is Pinterest. There is no option to open the article in Safari or any other external browser, though. You can copy and paste the URL into Safari or Chrome, but it’s not exactly seamless. 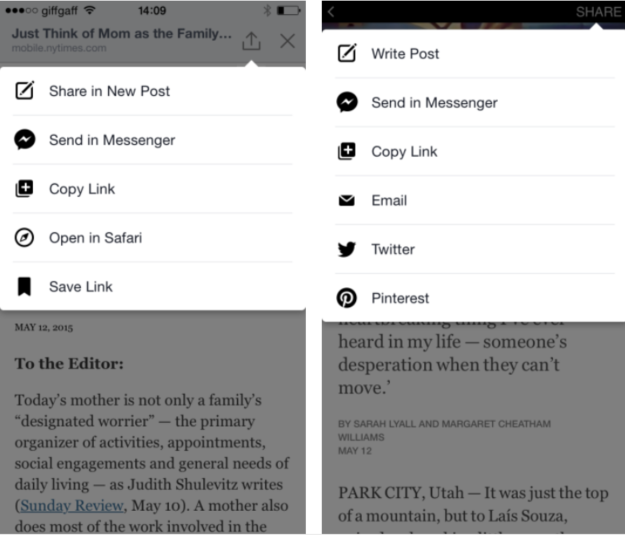 It’s notable that these articles can be shared to Twitter, given Facebook’s historical aversion to its competitor. And it’s also notable that you can’t open an article directly in a browser. Facebook has confirmed that these sharing options are standard to Instant Articles, rather than being customizable by the publisher.

At any rate, we’ll have a better idea of how different they’ll appear when other publishers start pushing out content with the new format. BuzzFeed in particular, with its approach to native advertising, will be one to watch, as “Sponsored Posts” have been a core component of its business strategy. How it embraces Instant Articles with such posts on Facebook will be interesting.

You can read our full Instant Articles launch post from earlier today for more background information on the initiative.